Cyberpunk 2077 has launched with significant problems as the game is filled with bugs galore. Worsening the game’s reputation was the discovery by intrepid gamers of how the game lacks vehicular A.I., Police A.I., and the abysmal state civilian A.I. current exists in. Among other issues, reviewers receiving early copies would have been unable to ignore, let alone overlook by accident.

These issues will take months to rectify, but the current state of the baseline last generation consoles is likely to remain horrible. On said platforms, the game barely manages to pull off 720p as it struggles to maintain consistent frame rate performance. The upgraded versions of both consoles are reported to have better performance, but persist with mockable graphic fidelity.

This isn’t the first time CDRP has met with controversy over the quality of its title’s console ports. During the development of the Witcher 3, the company made promises to long time fans and supporters that the game would not receive a downgrade to function better on consoles. Leading into the release, that assurance proved to be an outright lie.

Unlike last time, CDPR will not be able to sweep the issues and blowback under the rug. There will not be an insurgence of millions of new paying fans to mitigate the outflow of angry customers. Customers who are now reporting Sony is issuing refunds https://www.reddit.com/r/cyberpunkgame/comments/kb92ne/psa_sony_is_issuing_refunds_even_past_the_2_hour/  beyond the 2-hour play mark for digital purchases. After criticism emerged of marketing material failing to disclose missing features and the state of console versions of the game.

Standard protocol for console manufactures is to tell customers to pound sand if it is outside their TOS refund scope/window. Sony issuing refunds beyond said scope/window, is indicative the company is attempting to avoid a legal battle they are aware they won’t win. Yet that is mere supposition.

What is not supposition is the blowback from the sorry state of the console builds, alongside the buggy feature missing P.C./Next generation builds has resulted in CDPR’s parent company’s stock price to plummet. 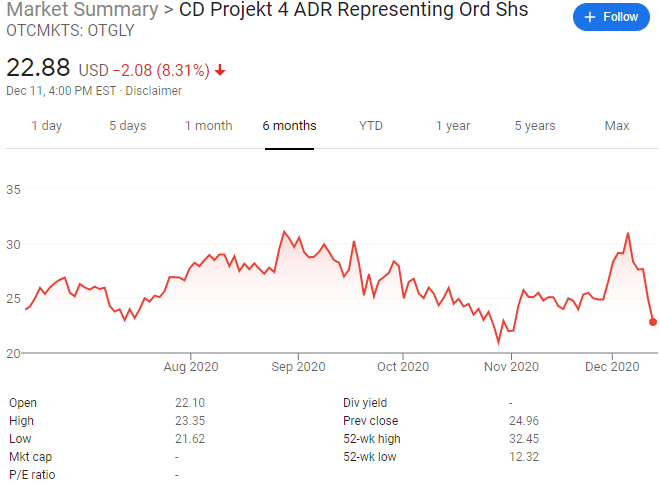 Word that the game has turned a profit with 9 million units sold during day one is likely to have a stabilizing effect on the stock’s value. Or, at a minimum, mitigate severe selloffs. As the game is now profitable, any further sales of DLC or units are after production and distribution expenses, pure profit.

CDPR is unlikely to suffer severe financial ramifications from their product’s poor quality in the short term. By comparison, long-term brand damage is likely to plague the company going forward, impacting sales and marketing performance.