A Russian Steam user going by the handle lcompote found himself permanently banned from the Steam community and from accessing his game library after Valve dropped the hammer on him for “extreme racist spam”.

Over the course of several years, dating back to 2017, lcompote (who brandished the Steam screen name of President Trump) made various comments and shared criticism about certain games without holding back how he felt.

You can view the entire album containing the times the Steam moderators removed his comments or took action against his account, which eventually led up to a permanent ban, and his inability to access all the games he had acquired on his account over the years. While some of the moderator comments are in Cyrillic, the comments that he made in the threads are in English.

As you can see from the screenshots, lcompote was mostly reprimanded for replying to other users in threads about games he played, ranging from Ring of Elysium and Draugen to Counter-Strike: Global Offensive and Dying Light: Bad Blood. His inclusion of profanity triggered the moderators something fierce.

After his latest run-in with Steam support, lcompote found himself in a back-and-forth with the support representative, and they not only permanently banned him from the Steam community but also blocked him from logging into his account or accessing his game library back on February 28th, 2020. 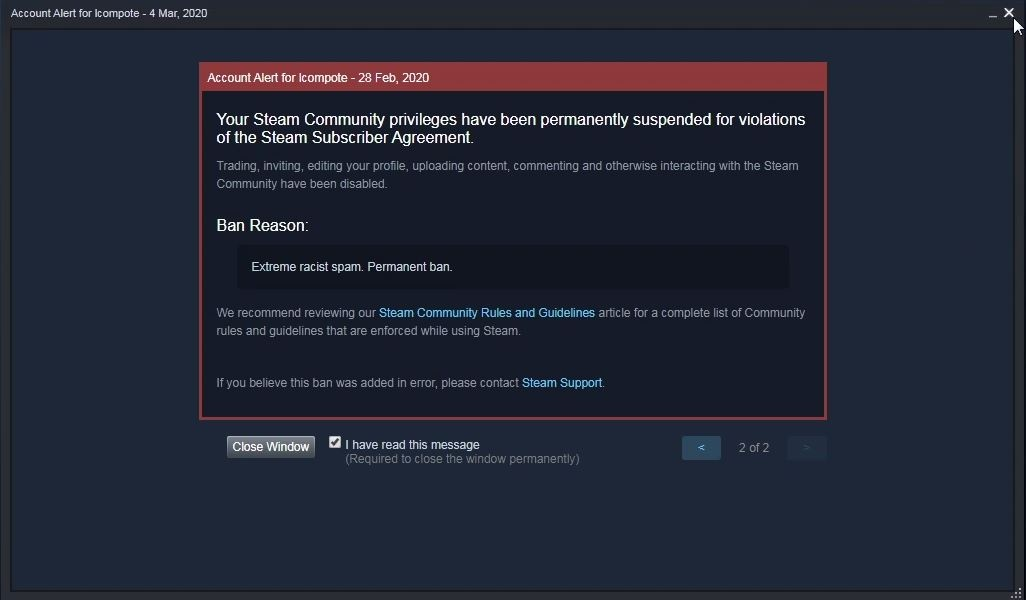 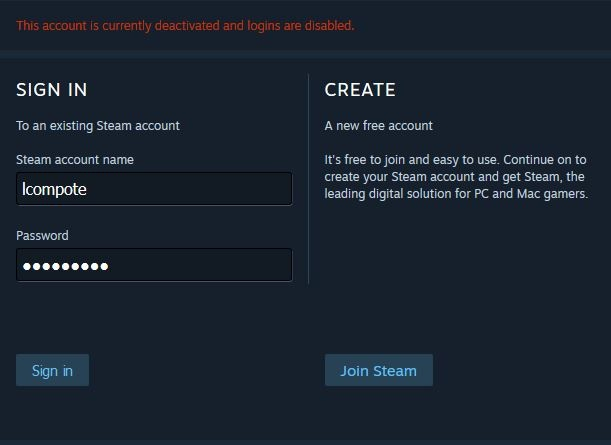 He explained that questioning support about the community ban is what led to the permanent account ban, writing…

“As you can see some [comments] date back to 2017 Apparently they all count to this day and summarize into a ban.”

This wasn’t a troll constantly spamming the Steam forums.

This wasn’t a guy on a vendetta to badger or hound down developers.

This wasn’t someone who spent all day and night in the community dropping lurid language or profane comments.

He simply said some things over the course of three years that the Steam support didn’t like, and decided to permanently ban him from accessing his account over those comments.

He can no longer play any of the games purchased, nor log into his account to his stats or profile. He’s unable to even play in offline mode since he has to log into Steam to access offline mode, and they’ve banned him from logging in.

Essentially, Valve utilized a Social Credit system of sorts to ban him based on culminating his infractions.

There’s no mention on the Steam subscriber agreement about enforcement related to violations that result in a permanent ban. The only thing they mention regarding account termination(s) is found in Section 9, sub-section ‘C’, which reads…

Even the Steam Online Conduct that the subscriber agreement refers to makes no mention about how many times you can upset a Steam moderator before your account is permanently banned.

In fact, they make no mention about what would lead to a permanent ban and/or loss of access to your account at all in either their code of conduct or the subscriber agreement.

Some gamers suggested that lcompote sue Valve, while others stated that what they did was illegal. However, since the user is from Russia, it makes things a little tricky since they would have to go by the laws setup to protect consumers in Russia. Unfortunately Russia’s digital consumer protection acts don’t seem to canvas cases like the one involving what Valve did to this Steam user, but perhaps if it’s brought to the attention of authorities something can be done about it.

Sony also did something similar to a PSN user, when they banned him from accessing his very own digital library on PlayStation 4 because they claimed he used “hate speech”. It’s quite scary to think that expressing your opinion in a public forum that rubs the employees of a corporation the wrong way could result in you losing entire access to your digital gaming library, yet here we are.

[Update:] lcompote posted a comment on his plans to combat Steam’s ban, writing…

“Just to give it a full context to everyone. I got a 3 month community ban in August (Ion fury post ). Citing my rights and the Russian law (Consumer rights protection law. They have no right to impose speech regulations when they sell a license or product ) to the support led to a 1 month ban preventing to contact the support altogether. Next in February 2 more comments led to a 1 year long community ban. Going to support and blalblab again my rights and the russian law, they slapped me with a perma community ban and 1 month ban to contact the support. in doing that, some steam support threatened me to disable my account if I continue to bother them. He used my real name which i never gave apart from the visa form payment. So anyone at Valve down to a cockroach has access to this information. It’s not in line with their privacy police or the russian law. Of course I didn’t stop so they disabled my account.

Oh yeah I’m suing the company. I’ve already filed with the Russian watchdog that deals with the consumer rights protection law. I’ll wait until the review is finished. That should take care of it on the state level. Fines or whatnot.

I will then send an illegal action notice to the company. If they don’t accept my demands to restore my account, compensate me and change their rules according to the russian law I’ll be taking them to court. I will throw the french court ruling idea on reselling the products you own for good measure. Also the fact they update their Steam agreement and can’t say no if you don’t wanna lose you games.

The russian consumer rights protection law works like magic here. I’ve used it many times before. It’s the only thing that works properly in this country hahaha No company can impose speech regulations when selling a license and product.”

(Thanks for the news tip Ruski)