Spiders and Focus Home Interactive’s Greedfall was easily one of the more highly anticipated games due out this fall. It may be an AA title and without the huge backing or promotion of a mega-corporation, but due to the dearth of quality games made by AAA publishers, real gamers began to thrust what little interest they had from fall’s line-up in the alternate history action-RPG, Greedfall. There are already some basic walkthroughs tossed up to help get you started with building a character and questing, and so you can check a few of them out right here.

The first walkthrough is available from YouTube TheRadBrad. He covers the intro sequence for the game, setting up your character, your archetype, and the early goings of the alternate history title. You can check that out below.

The game starts with the character creation. Your character will have their portrait made and so you can choose your gender – there are only two, as it should be – along with a couple of hairstyles, facial hair options, skin color, hair color, and eye color.

Once you get done picking your character’s visual appearance, their starting class – including Warrior, Technical, and Magic – and your starting attributes.

The Warrior build is designed for people who prefer up-close melee combat, while the Technical build is about setting traps and relying on mid-range techniques, while Magic is about long-range combat.

Once you get done creating your character, follow the yellow nav marker down to the courtayrd and fight Kurt.

Greedfall: How To Play

The basic controls are outlined during the fight with Kurt.

Square on the PS4’s DualShock or ‘X’ on the Xbox controller is to perform your main attack during battle.

Your secondary attack is executed with Triangle on the DualShock or ‘Y’ on the Xbox controller.

During combat press ‘X’ on the DualShock to dodge or ‘A’ on the Xbox controller to dodge. Outside of combat the dodge button will allow you to sprint.

Pressing Circle on the DualShock or ‘B’ on the Xbox controller allows you to parry during combat.

During combat simply press the right bumper to bring up the tactical pause button. This will allow you to pause the game and either change your team tactics, stack your attacks, or bind items from your inventory to the digital pad.

When you finish the combat tutorial go visit De Sardet’s mother, and then go visit Kurt by the docks. You’ll need to go talk to Ambassador Sahin before departing to Teer Fradee.

Talk to Cardinal Antonius just down the street.

Both Sahin and Antonius will offer you side-quest missions before your departure.

Follow the yellow nav marker at the top of the compass.

You’ll encounter Captain Vasco at the lower docks. If you have plans on completing some of the side-quests you can ask Vasco about Constantin or the ruffians that Antonius was talking about.

If you go into the tavern, talk to the barkeep and then go into the backroom and take the metal dowels from the barrels, which you can use to repair the tables.

Head upstairs and inside the room you’ll find the innkeeper key. You can then use the key to go into another room through the kitchen, which allows you to head out back to examine the Old Warehouses.

Once you get the dowels you can repair the table and then talk to the innkeeper.

The innkeeper will direct you to Constantin, who is being held by Ruffians.

If you have a point in science you can blow the door open or you can sneak around the other side and beat up the ruffians.

Head inside the villain’s den and go upstairs to retrieve Constantin.

You’ll find plenty of gold to loot throughout the hideout. Once you’re done you can exit and talk to Captain Vasca.

When you’re ready to exit the area, choose to leave and you’ll have to fight a boss.

Now the boss fight can be difficult for newbies, especially beginner magic users. The best thing to do is keep your distance and use long range attacks when possible. Wait for the beast to prep to lunge and then use your dodge either to the left or the right TWICE to get clear and out of the way.

If your MP runs out then switch over to your melee weapon using the right bumper. Once equipped, go in and attack the beast until his HP gets low.

There’s also a walkthrough provided by rubhen925 that also covers the bosses, the quest lines and the story content.

The walkthrough above covers a more diplomatic approach to many of the side-quests, including the quest of the Nauts involving the cabin boy, and avoiding fighting the ruffians who kept Constantin captive, opting to pay a 50g ransom for his release instead of fighting the men.

Once the boss is defeated, however, a cinematic plays you’ll arrive at the docks.

You can talk to the captain and then make your way to the Coin Guard Barracks and talk to Manfred.

You’ll need to venture to the warehouse in the port area. You’ll find the crates in the second warehouse on the first floor.

Head back to Manfred and tell him about the marked crates.

Manfred will give you another quest about corrupt guards extorting merchants. Talk to the blacksmith about the extortion racket and the dead merchant. 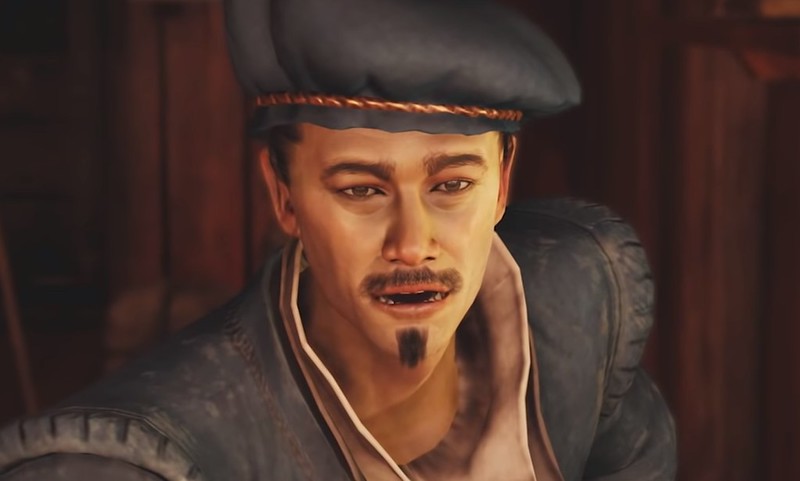 Talk to the second merchant, and then talk to the uppity third merchant with the teal getup.

Attempt to convince the merchant to help you, and you will have to return in two days. Additionally, if you encounter the native merchant on the street, go talk to Manfred, and then go talk to the minister to get a merchant’s patent at the governor’s palace.

Make your way to the governor’s palace and you will encounter a new party member, Siora.

This will start a new main quest mission to convince the two warring groups to ceasefire.

Professor de Courcillon will also give you another main quest mission, where you’ll need to mark safe spots on the map, and he’ll also task you to find out more about the creatures you fought at Serene.

Make your way into the first door on the left inside the palace and follow the doorways into the library and talk to the diversity hired minister. 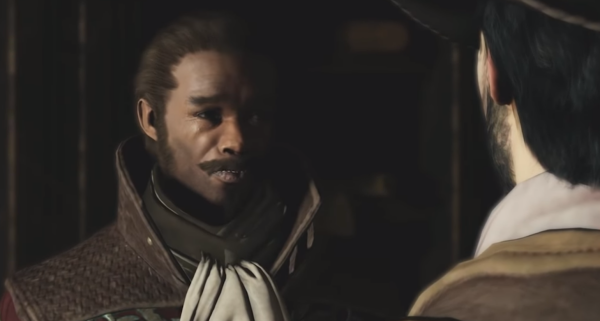 Before you depart you can complete the merchant extortion quest by returning to the merchant who set the trap, two days later. If you do so you’ll have to fight a bandit and then visit Egon at the barracks.

Take the silver coin and then go show it to Manfred.

This will finally complete the quest for the time being.

From there you can continue with one of the main quests.

If you travel east to the Vignamri chief, Ullan, he will request to establish a peace treaty with the king of Hikmet.

Along the way to Hikmet, Vasco will have a side-mission for you in New Serene. If you choose to accept his mission he will have to join your party.

At Hikmet you can talk to Governor Burhan about the disease running rampant among the people. Burhan will also have another quest for you regarding the caravans being attacked.

You can also talk to Burhan about Ullan’s request for joining an alliance and the itinerant merchant kept at the outpost.

This will update your quest log with several new quests and a couple of completed ones.

When you’re done inside the governor’s palace in Hikmet, you can fast-travel to the Hikmet outpost where you can speak with Captain Rainhild about the caravan attacks.

Speak with the surviving merchant and then make your way to the location of the attack.

You’ll find the location near the itinerant merchant location on the map. 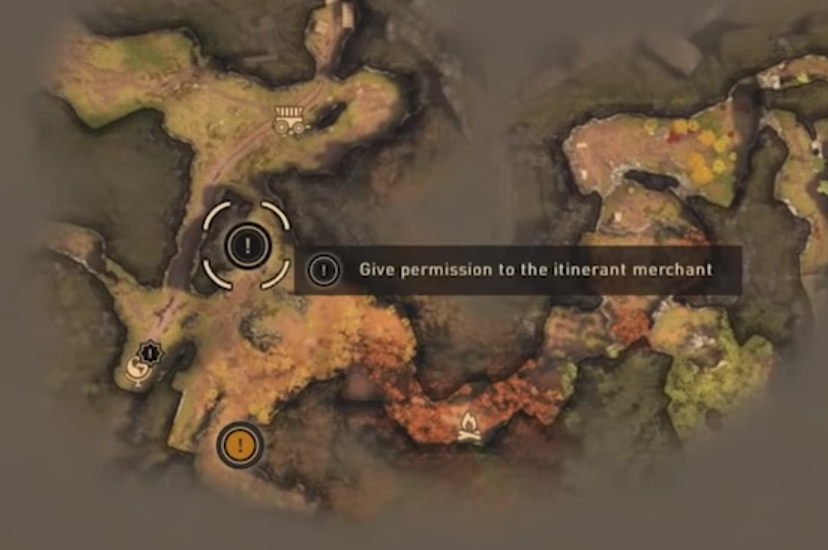 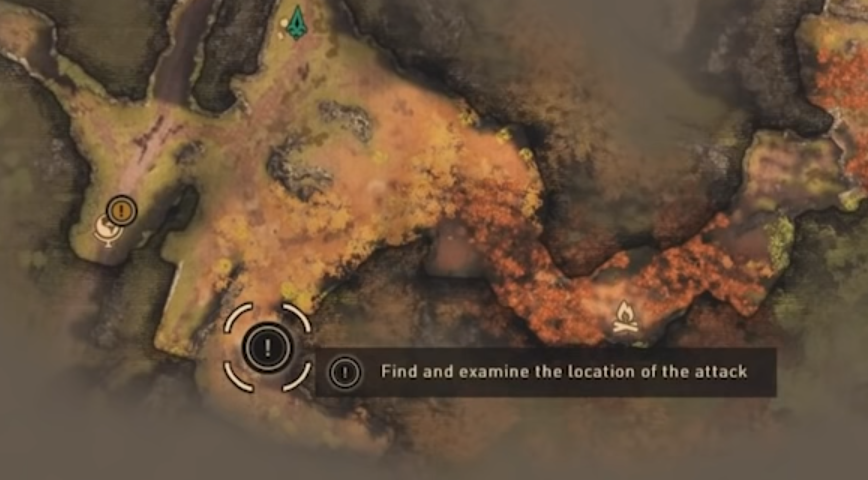 You can either kill the savages or charm them with charisma to leave the merchant alone.

Proceed to track down the rebels.

Additionally, you can speak with King Ullan about the peace treaty with Hikmet. He’ll request you to speak with another village chieftain, Mordun, to pacify relations between the two clans so that the natives won’t keep attacking the colonists.

You can fast travel to Magasvar “The Vale of the Great Battle” and make your way to Mordun’s abode. You can get to Magasvar by traveling south from Hikmet. You can talk with Mordun about the meeting – he will decline. If you have high enough charisma you can convince him to have a meeting with Ullan and the Hikmet emissary.

If you want to attend the negotiations you’ll have a limited window to get there. It’s in the same map as where Ullan’s village is located in Glendgnamvar. 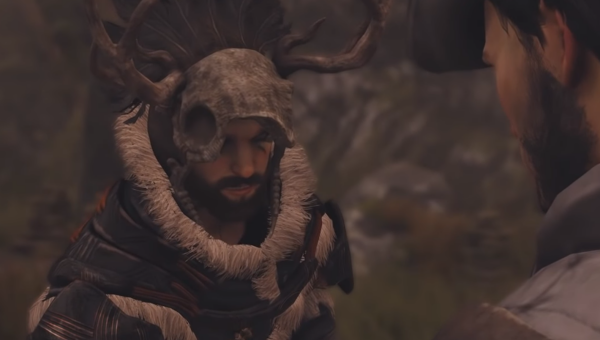 If you attend the negotiations, you’ll discover that the dark-skinned Ullan is actually a snake. He betrays the Hikmet emissary, De Sardet, and Mordun, and attempts to kill them all. You can help Mordun fight off the attack and preserve some semblance of honor.

If you choose to complete Vasco’s side-quest, you’ll need to talk with Dieter. You can either attempt to charm him or bribe him. If you’re successful you’ll only need to acquire garb to dress like one of the Nauts.

You can actually purchase the garb from one of the merchants if you have enough gold or attempt to acquire Naut garb from elsewhere.

Unlock the door, head upstairs, and you’ll find Vasco’s personal file in the desk at the end of the room.

Additionally, if you choose to do Kurt’s side-quest you’ll need to go back to the barracks and talk to the soldiers.

They’ll direct De Sardet to the medical examiner regarding Reiner.

Examine the autopsy, then talk to the medical examiner again and then go talk to Manfred.

You then have to go to the tavern and talk with the lieutenants. Most of them appear to be black.

After talking with the officers go back and talk with the 11th company officer, the trainer, and he’ll speak with you at night.

Proceed to talk with the 6th company officer about the phantom regiment.

You’ll have to wait for Kurt to get back with you regarding that mission, so it’s best to move on toward the main quest again, including meeting with the governor about the malichor or exploring the village of Vedrhais.