The Lovecraftian title has been one of the more hotly anticipated titles of the year, but some of that steam was let out of its sails when it was revealed that it would be an Epic Games Store exclusive on PC. Even still, if you were interested in seeing more of the game ahead of its launch on June 27th, you can check out the video to see what the gameplay is like.

The 12-minute playthrough gives you a look at some of the interaction systems, exploration, dialogue, and some cinematics. It’s still very similar to Frogwares’ Sherlock Holmes games, just with better graphics and more nuanced gameplay.

You can check out the video preview below, titled “A Delicate Matter”.

The video starts with some commentary from the developers who explain that you take on the role of Boston detective Charles Reed as he ventures to Oakmont to discover the mysterious origins behind the city’s descent into water and the madness that is infecting the inhabitants.

The video details how Reed takes on a case from the simian-looking client, Mr. Throgmorton.

The task sees Reed having to investigate a manner. What’s interesting here is that the game doesn’t tell you where to go or what to do. As pointed out in the video, you’ll have to figure out the cases on your own. This involves using the map and the notes to track down the location, and enter into the building.

Inside the manor there are some otherworldly creatures mucking about, which you’ll have to dispatch with your equipped weapons.

The game bounces back and forth between detective drama, investigative discovery, and third-person action.

As showcased in the video, you can use Reed’s ability to look through the fabric of time itself to reconstruct scenarios where you’ll need to piece together the evidence you discover. Once you put the pieces together and construct the scene, Reed will gather the necessary evidence to advance his case from there. 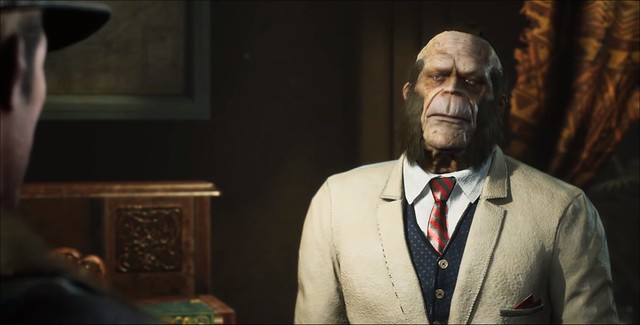 In the video we see that after gaining the names of the intruders, Harry needs to figure out who they are, so much like the Sherlock Holmes games, you’ll need to visit the police department and check the police records for the names you encountered.

Once you get a hold of a suspect’s address, you need to use your map to find the location and then manually travel there.

Once you reach the destination you’ll need to further investigate the scene or talk to any suspects. The video reveals that players will have the option of dealing with different people based on their choices. This includes arresting some folks, killing them, or letting them go.

Before we see how the case is resolved the video comes to an end. It’s pretty cool looking actually since it mixes Frogware’s nearly perfected approach to mystery games that they picked up from doing all those Sherlock Holmes titles for Focus Home Interactive, but they’ve managed to refine it into a horror-themed tale with Silent Hill-style monster encounters. Even if it doesn’t turn out perfect, I have to admire them for stepping outside of their comfort zone to try something new. It’s more than I can say for nearly every other major AAA title that isn’t coming out of Nintendo’s in-house studios.

You can look for The Sinking City to launch on PS4, Xbox One, and on the Epic Games Store June 14th, 2019 this year. For more info feel free to visit the official website.