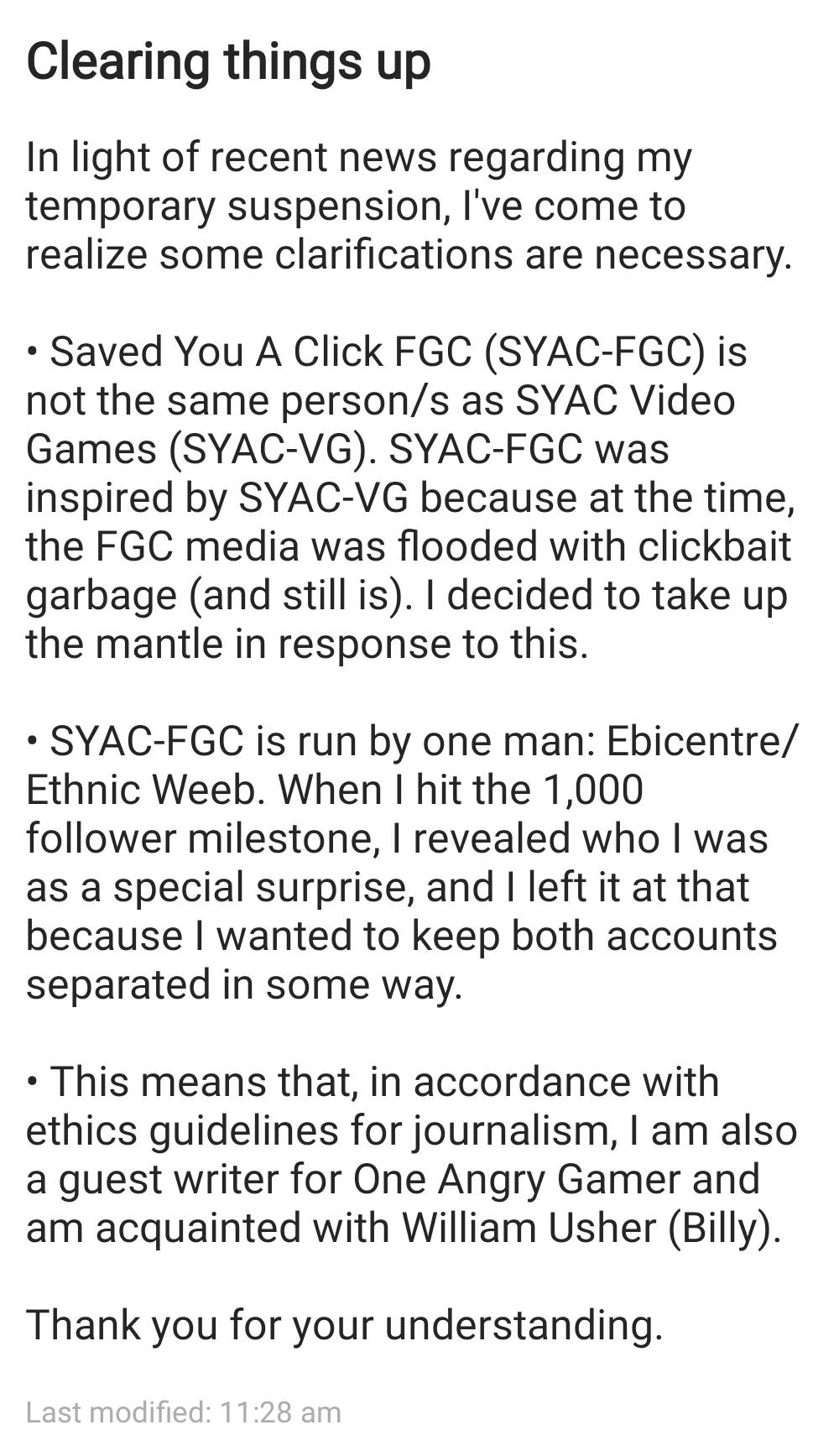 [Original article:] In the Age of the Clown comedy has been assassinated by irony. You can’t make jokes these days without tiptoeing around your phrasing and delivery like a male feminist having to tiptoe around a young maiden’s apartment after creeping on her all night, lest you end up in proverbial jail. This played out recently where the gay furry e-sports competitor, SonicFox, made a tweet showing a clip from Mortal Kombat 11 accompanying text saying that Fatalities is what he does to TERFs (i.e., Trans Exclusionary Radical Feminists), which netted him a brief suspension. Well, when Saved You A Click FGC joked about the tweet, it also netted Saved You A Click FGC a temporary suspension. Thus, joking about censorship can lead to censorship. Oh, the irony.

Ebicentre had images of the tweet that resulted in the suspension, which you can check out below.

In addition, they locked out @SavedAClickFGC for twelve hours over a joke tweet referencing SonicFox. pic.twitter.com/mISjFOJMVD

The 12 hour suspension was based on a tweet satirizing Sonic Fox, who originally directed his ire at the character Sonya Blade in Mortal Kombat 11 because she’s voiced by Ronda Rousey, who has been targeted by the LGBTQ community for her comments about trans-fighters having immutable biological advantages over women due to them being born with a ‘Y’ chromosome.

The attacks against Rousey were leveraged from SonicFox’s original tweet back on April 25th, 2019, where he showed an image of Sonya getting Fatality’d with the text “what I do to terfs”.

The tweet garnered more than 10,000 likes before SonicFox was eventually forced to remove the tweet after U.K., MP Joanna Cherry and other activists compelled Twitter to remove the tweet. A Twitter representative was called into a hearing led by Cherry who drilled the rep on why she didn’t remove the tweet sooner. The clip from the hearing was captured by Sankaku Complex, who originally reported on it when it took place.

SonicFox responded to Cherry’s criticisms (which also included targeting a meme from Zombie Land Saga) by going on a rant about how terrible TERFs are.

On May 1st, 2019, in a lengthy Twitter thread, the fighting game e-sports competitor wrote…

“LMAO UK parliament talked about my terf tweets today that were taken down earlier! [Joanna Cherry] apparently thinks teleporting fullscreen from a sand trap and chopping Sonya or doing the fatality as intended in Mortal Kombat is hateful conduct to women lol

“You still don’t address the actual abusive nature of terfs in general, and keep presuming it as some kind of identity when its just another hate group that people, BOTH men and women alike subscribe to. You know damn well you and I both wouldn’t be here if I did that to male terfs.

“So not only are you dodging any atrocities terfs actually do to get my friends killed, but then you make it a one sided issue without even knowing who youre talking too or doing any research on the content you sought out or the creator. But oh yeah video games and IRL is the same.

“But now what I am most curious about is what if I did that exact same clip using say Sonya Blades daughter, or another woman character in the game. Or even Sonya herself LMAO! Would you have any evidence for your rhetoric then?

“Terfs are things both men and women subscribe to alike (I know this as you sent a bunch at me) and the fact that you made it only about women makes you reaaaaally . And I will continue to stand up to actual abusers like you and your followers in power. And its so perfect about what you said in the clip to because what you basically said was “I needed targeted harassment and followers to get this tweet taken down” when twitter already knows I aint violate playing a video game initially lmao.”

SonicFox then rounded out the diatribe with a link to the original video while calling Cherry’s argument.

Heres the video on her entire btw! She says literally the dumbest and tries to relate it to actual abuse against women when the correct correlation is that it is my way of resisting lmaohttps://t.co/soVWxUVbOg

There’s really only one reasonable response to the feud brewing between the TERFs, politicians, Twitter staff, the gays, the furries, and the e-sports community.

When Saved You A Click FGC attempted to satirize the tweet that kicked off the fight between every facet and faction of Social Justice Warriors, the account was hit with a temporary 12-hour suspension just like SonicFox.

On the upside, the suspension was lifted and Saved You A Click FGC notified the community about it on May 19th, 2019.

My guess is someone reported me and/or their algorithm didn’t understand the context of my joke. Regardless, the deleted tweet can be found below. https://t.co/SgzHO0IMnP

However, the story here isn’t just that Saved You A Click FGC was hit with a suspension, it was that the suspension came from a tweet that blatantly acknowledged that it was a joke.

Comedy’s enslavement to the overt political correctness in today’s society is basically comedy in itself. However, most people see it as being more sad than funny… sort of like a clown. I suppose it’s fitting given that we’re currently living in a clown world.

(Thanks for the news tip Ebicentre)