Dontnod Entertainment’s Life Is Strange 2 has basically had all the wind and momentum knocked out of its sails coming off the heels of the original Life Is Strange.

As cringe-worthy as that game was you have to admit that it at least had a very strong following. Anyway, Dontnod dropped the third episode for Life is Strange 2 on PC, PS4, and Xbox One, and gameplay walkthroughs are now available to help you make all the right choices in the game.

YouTuber MKIceandFire has up the full episode so you can get an idea of what choices to make and how best to make them. You can check out the Life is Strange 2: Episode 3 – Wastelands gameplay walkthrough below.

The beginning of Episode 3 recaps what happened in Episode 2.

Once it gets done recapping stuff, you’ll need to go find Daniel.

You can examine stuff in Daniel’s room but you’ll find him in the garage, off the living room.

You can either have Daniel hit himself or give him a nuggy. When their dad comes in you can say that Daniel started it or you were just goofing off, but the outcome doesn’t really matter.

Sean’s dad will give him a talking to about helping out because he can’t do it all on his own. You can then examine the room and some of the stuff in it.

When you get done looking at stuff in Sean’s room, head into Daniel’s room to talk to him. Daniel won’t want to talk, so you’ll have to convince him to talk. Highlight the creepy alien toy and the Power Bear. 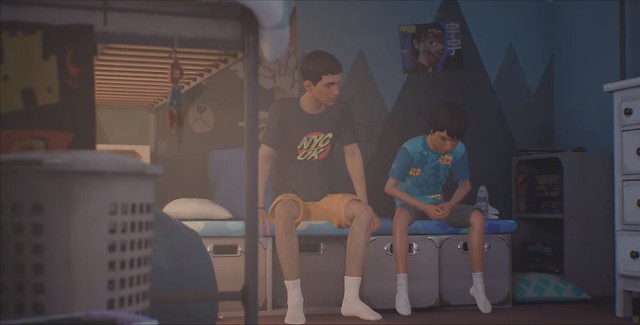 Daniel will place a spaceship on his bed. Ask Daniel about the spaceship to finally get him to open up.

Daniel and Sean will talk for a bit and then Sean will offer to let Daniel keep his watch. After that the flashback will end.

Sean can examine some of his belongings in the tent. When he steps out a topless chick will walk by so you can get a glimpse at her bare tits. No joke.

A short cinematic will play and then you can sketch the forests. It’s just like the other sketching sequences; simply hold down ‘A’ button on the Xbox One controller or ‘X’ on the PS4 DualShock to gather the details.

You can talk to Ingrid and the paranoid black man once you get done sketching. If you drink some of the coffee be sure to refill it before walking down the trail to where Finn and Daniel are training throwing knives.

There’s a short mini-game where you can throw the knife at the target. It’s wobbly.

While talking with Daniel after the incident with the knife, he’ll ask about contacting Karen. You’ll have a key choice in whether or not to contact her. If you choose not to contact Karen then Daniel will be angry.

You’ll also have a key opportunity to ask about why Daniel no longer wears his watch.

If you say nothing then the two will head off to the truck, if you ask him about it he will say he prefer wearing the wristband that Finn gave him.

Another key moment pops up when Sean is given an opportunity to intervene or do nothing when Big Joe slaps the hippie chick upside the head. 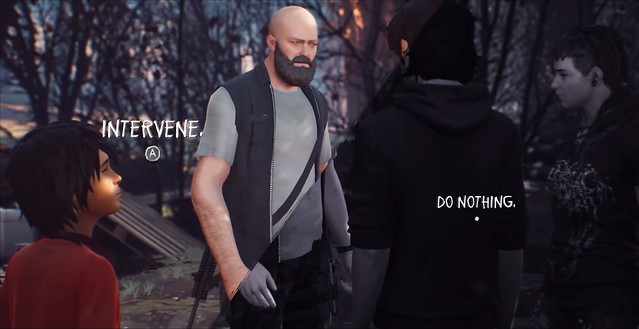 If you attempt to intervene Big Joe will just bully around Sean and the hippy chick will check Sean for being a white knight.

You can then talk to Merrill about work on the pot farm and whether or not he has kids. Following that you’ll engage in a short mini-game where you have to use the right and left trigger to trim the buds.

Trim the buds and clean the scissors.

You can look around the table and there’s a pen you can grab with the right bumper.

After the tedious trimming, Finn and Sean will have a conversation about work and Finn’s family.

Back at the hippy camp, you can talk to the other members to learn about their pasts.

Finish up talking with the camp goers and then you’ll need to go grab the green water barrels and move them over to the big tree in the center of the camp where it highlights for you to set the water tank down.

Rinse and repeat this process, picking up and placing the water tanks in prep for the showers. Head to the lake where Daniel is located to start working with him in training his powers.

The duo will head to the other side of the lake and you’ll need to aim your acorns and throw them for Daniel to knock them out of the air.

In addition to targeting the rocks, you can also have Daniel blow up the mushrooms. 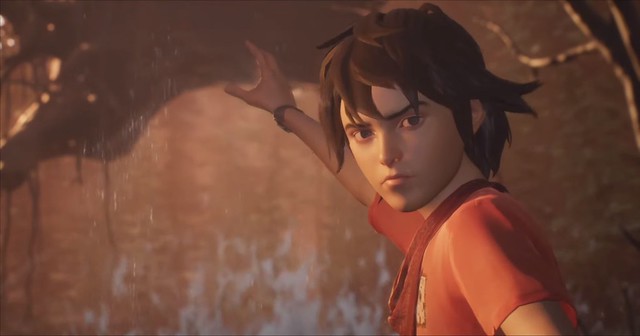 Sean and Daniel will have a small pow-wow at the lake. You’ll be able to talk about why Daniel has been acting irascible toward Sean.

At the camp, Finn will offer Sean a hit of pot. You’ll be able to accept or deny it – if you deny it you’ll be a good role model for Daniel. If you accept the hit of marijuana you’ll create more antagonism with Daniel since he’ll ask why he can’t smoke pot but why Sean can.

You can ask some questions or make some statements about the hipsters’ life experiences.

When everyone tells their sob story and gets done, the hipster chick Cassidy will want to cut Sean’s hair. Here’s another pivotal moment. Daniel will want to go to sleep, so you can either go back to the tent with Daniel and talk things out or you can stay and have Sean get his hair cut. 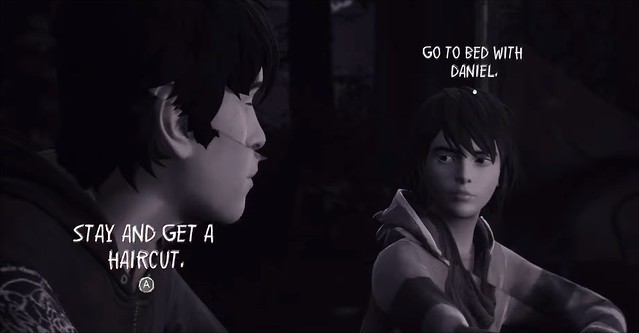 Keep in mind that going back to the tent with Daniel will improve Sean’s relationship with his little brother.

Following an interlude the hipsters will be sitting around waiting for the payday. However, Daniel will screw it all up, and Merrill will fire Daniel and Sean.

While Joe is about to beat up Daniel he will get hit across his head. A key moment will pop up where Sean will have the choice of either saying he threw the cigarette ashtray or say nothing. If you say nothing then Finn will balls up and step in only to get punched in the face by Joe.

Finn will want to use Daniel to rob Merrill. There will be another defining decision where you can either take Finn up on his offer and rob Merrill or decline his offer. 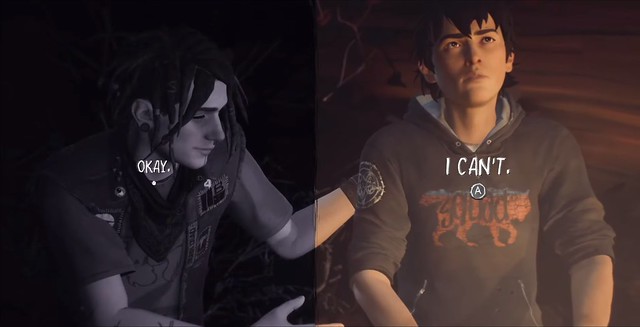 If you choose not to take Finn up on his offer, you’ll talk with the rest of the hipsters at the going away party. Cassidy will want to give Sean a tattoo. You can choose to accept it or deny it. You can also choose what you want as a tattoo for Sean, either a wolf or have Cassidy offer a surprise.

After getting the tattoo Cassidy will head to the lake to take a swim. Sean will have the choice of either getting into the lake or saying “no way”.

You also have the choice of having Sean tell Cassidy if Sean likes her or not. If you say “Yes” then Cassidy will kiss Sean. 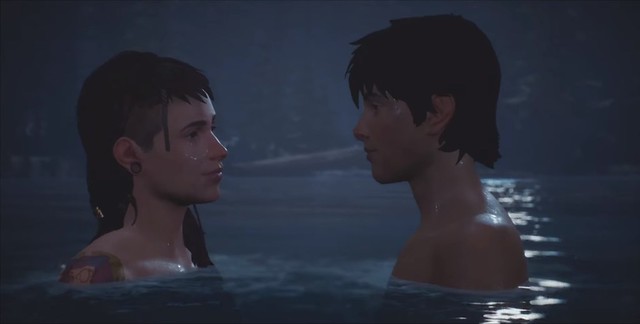 The duo will head back to Cassidy’s tent where Sean will have the choice of sleeping with her or not.

Sean and Cassidy will go off in search of Daniel and Finn. They attempt to commandeer one of Joe’s trucks. You have to force open the locker. They plan on waylaying Joe by slashing his tires, so take the hammer inside the locker and the screwdriver from the toolbox. Puncture the tires on the truck.

Use the hammer to break the window of the truck and then the duo will drive away to Merrill’s place. 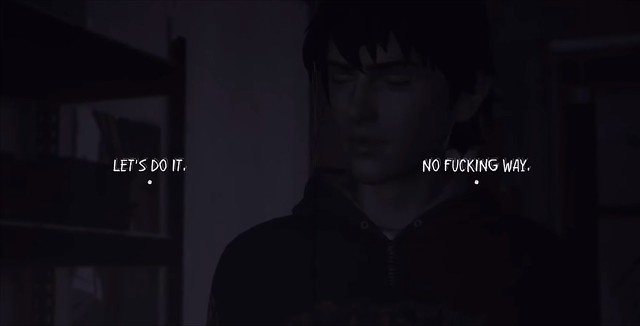 Finn will attempt to convince Daniel to join in their escapade to rob Merrill. You’ll have a choice to join them or reject Finn’s offer.

Merrill will then poise himself to shoot one of the hipsters, at which point you’ll have a choice to either do nothing or have Daniel use his power. If you have Daniel to use his power, then a fight will ensue, Daniel will get shot and then his power will go unhinged and the room will blow up, which is how the episode ends.

In an alternate playthrough from YouTuber DashieGames, he chooses not to use Daniel’s power during the encounter with Merrill, but the outcome is exactly the same.

Following the end cinematic sequence there’s another scene showing someone walking down the road in the scorching heat, but it’s unclear who it is.