[Update 5/15/2019:]  The developers are now censoring threads, banning users and removing reviews that criticize the inclusion of the trans rights flag.

[Original article:] Don’t visit the Steam forums for A Hat In Time… unless you don’t mind diving into a dumpster fire of polemics and hysterics. It’s gamers versus Social Justice Warriors, and gamers are trying to fight to keep politics out of A Hat In Time, while Social Justice Warriors are claiming that people who aren’t okay with certain forms of sociopolitical iconography in the game you’re a bigot. How did this all come about and why is a kid’s 3D platformer now the battleground for the Culture Wars? Because of a trans flag.

More specifically, in the recently released DLC expansion pack titled Nyakuza Mtero + Online Party it features a trans right flag that’s painted into a corner of the stage at Nyakuza Metro. You can see the flag below as it appears in the game.

There’s even a video guide on how to reach the location of the flag, which is somewhat out of the way once you reach the Metro. You have to pass through a couple of stations, use a hat to get through a sewer access, scale up a wall in an alley, and then use another hat to slow down time. Once you pass by the cat trains, you’ll see the trans rights flag in the corner on the wall. Once you get there it’s literally impossible to miss it.

Youtuber icze4r has a three and a half minute video showing you how to find the trans rights flag.

The appearance of the flag set off a chain reaction on the forums.

Threads began popping up asking why Gears For Breakfast would add a trans rights flag to a kid’s game. 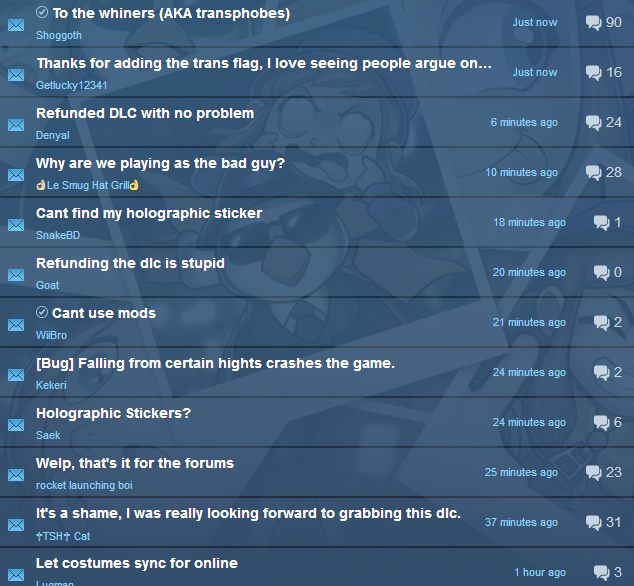 This spawned responses from people deriding those asking for the flag to be removed, such as {ST}SbrTthBttrfly, who mocked gamers for not wanting A Hat In Time to be used as a vehicle for political propaganda. Before they were banned, they wrote…

“I heard that when you see the flag, Hat Kid bursts out of your monitor, says “Trans Rights Are Human Rights,” kidnaps your dog, and posts your internet search history on your Facebook profile. Oh, the humanity of it all! Will no one think of the oppressed gamer?”

Deathraven13 made a post decrying the Epic Games Store and any inclusion of politics in games, which is why he didn’t like Mortal Kombat 11, but his thread was eventually locked. Deathraven13 tried again with a second post on May 13th, 2019, where he outright asked for Gears For Breakfast to remove the trans rights flag, writing…

“Hope you’ll solve this issue (I wish I could refund the game right now) and if not it’s clear what happen next. If nothing change I won’t have to change my review a third time in where I explain what’s up.

Some of these threads caught the attention of the Social Justice types on Twitter, who ended up getting thousands of likes and retweets saying how much they hate gamers.

There’s a graffiti with the trans flag hidden away in the new A Hat In Time DLC.

There’s a 6-pages long thread about it on the Steam forums.

The six-page thread was just one of many that have popped up since May 11th. Users began flooding the forums with criticisms against Gears for Breakfast for including the trans rights flag.

These threads were also rebuffed by other users on the opposite side of the sociopolitical spectrum. Users like fungusdude4 claimed that people who were a “bigot” could “leave right now”, and then proceeded to go on to say…

“My curiosity is killing me. How did we get into the situation where GfB includes a character is voiced by a terrible racist ♥♥♥♥♥♥♥ now apparently including a decal of a trans flag in the new DLC (note: I have not played in quite a while and I don’t have the DLC)? Like, I guess you could see jontron’s inclusion as a neutral move, but it’s never sat well with me. Is GfB and the people who comprise it reasonably progressive? Have they been this way and messed up wrt jontron? Have they grown since that? I’m confused. How did we get here and can I stop having misgivings about this company? I stopped following the lead dev and this game a while ago so I don’t know much.”

There were a few others who also joined in making threads backing up the developers and supporting them for adding the trans rights flags. Others like blegh used the opportunity to keep taking potshots at people who didn’t just openly accept the flag and swallow the developer’s politics wholesale.

Instead of debating about the developers’ political stances and beliefs, some simply championed for refunds and demanded their money back, like Dianna Soriel, who claimed that they didn’t purchase the game with the intent of supporting mental illness, writing…

“I would still like for the devs to respond to me and give my money back.
I bought his game a year ago on the premise that it would be a fun platformer and not a mouth piece for degeneracy and mental illness.

“I am going to tell you this only once before i go to the bank and bruteforce my money back.
You may have gotten my money this time, but i promise you, you will never see a penny out of me again.”

Since the discovery of the trans rights flag shortly after the release of the DLC, the forums and the community at large surrounding A Hat In Time are now locked down in a vicious battle, not unlike what happened with the Alt-Right versus the Communists in the Wolfenstein 2: The New Colossus forums that spawned from the game’s overt embracing of caustic politics, which resulted in the, Alt-Right, and Communists threads all getting nuked.

One user, Vis, desperately tried to get people to stop flooding the forums with all of the political debates, writing…

“Personally I fall into the camp of “I don’t really get it but whatever, it’s not as if it hurts me, so treat me with respect and I’ll treat you with respect” on the whole trans thing. But when such a good DLC came out, it’s a shame half the stuff on the forums is about this little thing instead of that.

“If you’re against trans, just ignore it, enjoy the game. It’s a good game, a nice, wholesome platformer with a lot of love put into it.

“If you’re pro-trans, just ignore the people who are against it. They’re strangers on the internet, who cares if they disagree with you.

“I just want the forum to be about the game, really.”

It’s unlikely that the forums will ever go back to the way they used to be.

Right now, every couple of threads is about the trans rights flag on the A Hat In Time forums. So it looks like this may end up being one of those topics that envelops the game for the time being.

Once a developer makes their political intentions clear, gamers will react to it, especially during these trying times where most people want to play games to get away from those kind of politics.

In this case, Gears for Breakfast took a dive headfirst into one of the more controversial topics of our time, and did so in a game aimed at kids.

I was curious what the reasoning was behind the inclusion of the flag, as it seemed to do little more than tear the community asunder. I reached out to Gears for Breakfast to ask about why they included the flag and what they were hoping to achieve. If they respond the article will be updated with their response.

[Update: Following the publication of the article, many of the threads arguing over the trans rights flag have been deleted or locked]

[Update #2:] Threads threatening or announcing refunds over the inclusion of the trans rights flag are also being deleted, such as the one from Ebicentre, where he wrote…

“I bought this game a while ago, but due to personal circumstances I haven’t had time to properly play it. Everything I’ve seen about the game up to this point was something I genuinely looked forward to experiencing myself (I watched my brother play it on PS4). With that being said, if everything is political, then the inclusion of this particular flag in a family game puts me in an unwanted situation; I now have to put my political beliefs in front of my desire to indulge in escapism.

“I expect the devs to double down on their commitment to their now openly declared political ideology, so I won’t wait for them to make a statement. I will instead leave a negative review and obtain my refund, which I am legally entitled to as an Australian citizen. Nothing anyone says to me will make me change my decision, and I’m sure the devs share this mindset as well. If they want to believe in postmodern original sin, then I won’t tell them to self-censor their games. I’ll just take my money elsewhere.”

(Thanks for the news tip Animatic)