The Bearded Ladies and Funcom’s Mutant Year Zero: Road To Eden is now available for Xbox One, PS4, and PC. The turn-based, futuristic, post-apocalyptic, mutant exploration game is one part Howard The Duck and one part XCOM. If you need a little guidance on getting started there’s a gameplay walkthrough available.

YouTuber Skye Storme has a complete playlist available featuring a playthrough on the Very Hard difficulty setting, which makes the enemies more difficult to fight, no health regenerates after the fight, skill cooldowns don’t automatically recharge after the fight, and enemies deal a lot more damage. You can check out the walkthrough for Mutant Year Zero below.

The game starts with a short cinematic with Bormin and Dux as they’re making their way back to the Ark.

You can hold ‘Q’ to see the map when you’re not in combat. During combat you can hold down ‘Q’ to rotate the camera.

Outside of combat you can press ‘E’ to collect items or interact with the environment, such as investigating points of interest.

Press ‘F’ to regroup when outside of combat while you’re in exploration mode.

During combat you can press Tab to switch between enemy targets.

Also, during combat you ca can press ‘X’ to switch weapons if you have another weapon equipped.

You can press in the right mouse button in to sneak during the exploration mode. Keep in mind that so long as the enemies don’t spot you, you won’t be engaged into combat. You can use the sneaking to avoid enemies, perform stealth takedowns or attempt to ambush foes.

Press ‘C’ to open up the mutation menu, which will allow you to customize and assign skills and traits to the selected character.

As showcased in the walkthrough above, you can use the large scale environments to sneak around and flank enemies. In the early parts of the game you’ll want to make use of the houses, shacks, and trees to get around the enemies and take out the baddies.

Ducks uses a crossbow, which is a stealth weapon that fires silently. Bormin can use more powerful weapons but he has to get up close.

Once you take out the enemies the tutorial level will end and a cinematic will play.

When the cinematic is finished, you can scour the environment because heading back up to the Ark. Head over to the dilapidated building and there’s a chest with a visor inside for Dux.

Once you grab the visor there’s a Marauder just outside the building who is patrolling the area. You can sneak up behind him when he doesn’t see you and use Dux to take him down silently.

Just up ahead there is a level 1 Hunter and a Butcher. You can use Bormin to get in close to take them from the front while using Dux to take one of them from behind.

Just north of the camp there’s another chest with a Stalker Vest inside. Take it and it will give you some extra health points.

Once you get done with scouring the surrounding area and scavenging for loot, make your way to the Ark’s elevator to witness another cinematic. 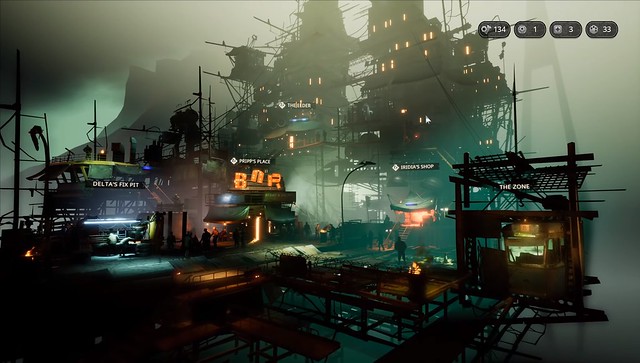 The new task for Dux and Bormin is to find Hammon, the gearhead that keeps the Ark’s machines up and running. Your task is to make your way to the north where Hammon’s cabin is located.

While at the Ark, there are a few places to visit.

Delta’s Fix pit allows you to upgrade your equipment after you collect scraps and gear parts.

The Edler gives you quests.

Prips’ Place allows you to trade some of your artifacts for skills. It’s suggested to get the Mule skill to add an extra grenade slot.

Once you get done upgrading your characters and gear, head back down into the zone to Hammon’s cabin on the map.

You’ll need to take out the enemies at the cabin. Skye suggests hiding the duo and waiting for one of the enemy patrols to walk away from his teammates and then using the crossbow to take out the Marauder.

Next, reposition Dux and Bormin to flank the Shaman and then have them take out the Shaman.

There’s a third guy inside the cabin. You can attempt to use the Overwatch feature and take cover to draw him out, or you can wait for him to move into a position that opens him up so you can get a 100% hit chance opportunity.

Recruiting Selma To Your Team

Once the enemies are dead you can investigate the cabin, witness a cinematic, and loot some of the gear around the cabin, including the far-looker.

Further west of the cabin there’s a forest clearing with some Zone Dogs wandering about.

Further northwest you’ll find another shack with some more loot.

Head north into the next area and you’ll find your third team member, Selma.

She’ll explain that Hammon went further north and that she was part of his team, but she got left behind after they were ambushed by ghouls and she was paralyzed for two days.

After Selma joins the team you can head northeast and there’s another shack with some loot that are being patrolled by two level 5 Zone Dogs.

Sky suggests splitting up the two Zone Dogs so that you only have to take out one of them at a time. Separating them and killing one at a time will prevent them from giving your group some health problems.

There are some gun parts on a playscape and a top hat inside of a chest just north of the abandoned house.

Just north of where you pick up Selma the next sector is called The Fallen Angel. This is where the satellite has fallen.

There are five enemies up ahead along with another Hunter who patrols the area and a separate Butcher who patrols off to the west.

Skye recommends taking down the Butcher, looting the weapon parts and gear, and then leaving the area and heading back to the Ark to gear up your Stalkers and upgrade their equipment.

During the upgrading process Skye suggests getting Hog Rush for Bormin, as well as getting a trait to help stave off the bleedout for two turns.

After you get done upgrading your characters and it’s time to head back into the zone, it’s suggested you go to the a forbidden level 25 area south of the Ark outskirts.

The Iron Serpent will allow you to retrieve some high-level items.

The idea is to scrounge up some free stuff without getting engaged in any sort of combat against any NPCs.

In a destroyed train cart there’s a chest with an axe armor located inside. You can take it by avoiding the Zone Dogs that patrol around the train area.

Once you get the gear you can head back to the Ark and equip the gear and outfit your team and then attempt to proceed forward through the Fallen Angel sector.

According to the walkthrough, the best course of action is to take out the Med-Bot first by using the three Stalkers.

The objective is to take out the Med-Bot without alerting the other enemies. So use your stealth weapons, and, if possible, use Hog Rush on the Med-Bot.

Hog Rush will disable the bot for an entire round so it means that you don’t have to worry about being ambushed by the others.

There’s also a downed Huey, covered in moss and filled with some useful loot. With the Hunter out of the way you can scavenge the Huey and take the loot. 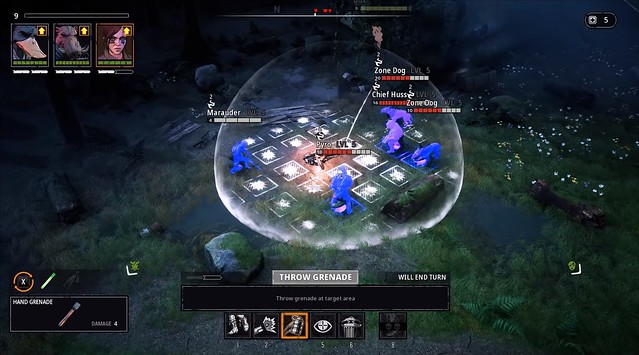 For the enemies around the camp, you’ll want to position your Stalkers in a flank around the enemies, with Selma by a tree. If you have the Tree Hugger rooting ability for her it will allow you to root the enemies in place around the camp for a round. Proceed to then lob a grenade at them and it will deal AOE damage to all of them. It may even kill one or two of them.

You can then use Bormin to go in and take out the pyro. Also make sure that Bormin has some kind of armor on to tank a shot from Chief Husse.

Your main goal is to keep the dogs rooted while your team focuses on the Chief, since he’s the most dangerous. Once Husse is down then you can focus on the dogs.

Once you take out all of the enemies there’s a chest by the camp with a Mimir Needle Pistol. The highlight for the weapon is that it’s a silenced pistol, so it can help keep the action stealthy and silent for all three members of your team.

After you take all the loot and clear out of the area, make your way back through The High Road sector. Make your way westward up the incline and there are several enemies you’ll need to take out.

Skye suggests to first take out the Shaman, but to always survey the area first.

There’s one Shaman that patrols away from the rest of the enemies by a railing. You can ambush the Shaman and use Hog Rush to knock him off his feet, which will prevent him from making any moves for the next round.

You can then use the other two to damage the Shaman.

Keep damaging the Shaman after you end the next turn and finish him off.

You’ll want to avoid using Hog Rush in the Hunter because a Med-Bot is just behind him. Use Skull Crusher on the Hunter, followed by the other two to finish him off.

Move Dux and Selma around from the opposite side to take out the low-level Butcher and avoid being spotted by the patrolman on top of the container.

There’s also a chest with Gladiator Armor located inside.

There’s still two enemies remaining, which is a Hunter and a Med-Bot.

Wait for the Hunter to move to the other side, outside of the range where the Med-Bot is located and engage in combat with the Med-Bot to take him down. Use Hog Rush to knock him down and stun him. Use Selma to do damage on the Med-Bot with a silent weapon, and then do the same with Dux. Rinse and repeat on the next round while the Med-Bot is still stunned from Hog Rush to kill him.

Lastly, we offer you our cheat for offline mode or single player, that possible to have a God Mode and One-Hit-Kills. But, please use it wisely and don’t use it on multiplayer game.