Activision re-released the Spyro: The Dragon trilogy as Spyro Reignited Trilogy for Xbox One and PlayStation 4. The package consists of Spyro: The Dragon, Spyro 2: Ripto’s Rage! and Spyro 3: Year of the Dragon. If you’re curious about getting a little help with the remake of the trilogy, there are some gameplay walkthrough guides available.

YouTuber ProsafiaGaming has a playlist of all the games and all the cinematics wrapped up in a nice little playlist that you can check out below.

After a short cinematic, players are thrust right into the game. You’ll have the ability to fire Spyro’s short-range breath, dash, and jump.

Use ‘X’ to jump on the DualShock or ‘A’ on the Xbox One controller. You can also slightly glide by holding down the jump button at the height of a jump.

You can roast enemies with Spyro’s breath or dash into them to kill them.

In the main starting world interact with the frozen dragons to receive tutorial hints and collect the dragon status. There are a number of worlds you can also visit through the map map, but you’ll need to rescue all the main dragons within the starting area. There should be four. From there you can enter into the first main level. 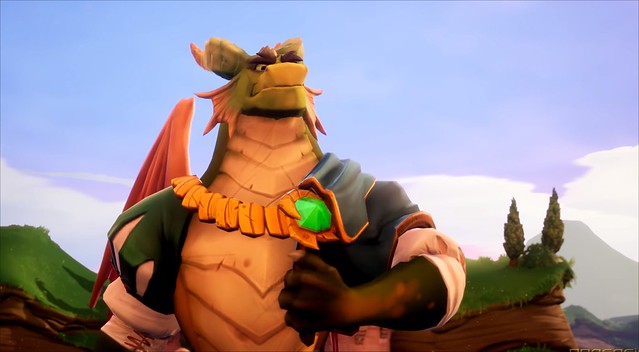 You can collect some of the crystals around the map and take out the sheep and ogres. Head into the enclave to collect more treasure and rescue Lindar.

You’ll also find an extra life in a corridor and free another dragon. There’s also a portal that will take you back to the artisan home. However, don’t go through the portal. Jump off the ledge and down to the beach, you’ll find that there’s a cave with a key inside. Take it.

Across the other side of the map you’ll find another captive dragon, this time it’s Gavin. Also that key you picked up? It will unlock the treasure chest next to Gavin.

Head into the tower within the keep and there’s a magical gravity lift that will take you to the top of the tower where you’ll find Gildas, who is the last dragon to be rescued in the map.

Just outside the keep area there’s a fast-running cloaked creature. You can hound him down and eventually burn him to capture an egg.

You can leave the map once you get all the dragons, but as you can see in the video above, you can also get all of the crystals to 100% the level. 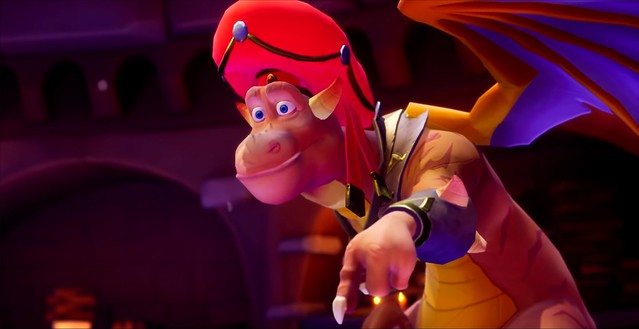 Once you’re ready you can return to the Artisan world map through the portal you uncovered inside the keep. Proceed to the next stage, the Dark Hollow.

Beat up the ogres and burn them as if they were illegal aliens trying to take over your home. There’s a group of them on a ledge, just blast them down and then proceed inside of the hideout. There’s a dragon inside of the library.

There’s another dragon up on the platforms just outside of the indoor library. Also, take note that the enemies with the metal armor can’t be burned head-on. You’ll either have to get behind them or use Spyro’s dashing charge attack to damage the ones wearing armor.

On your way to the exit you’ll encounter the final dragon in the area, bringing your total to 11 at this point. This will then open up the portal back to the Artisan. 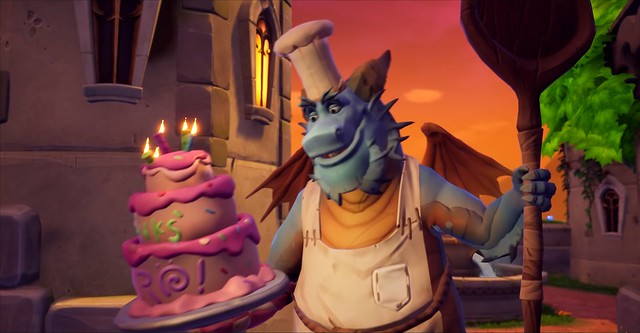 At the town square you’ll need to head up the step-platforms, which will lead you to Nils. Free him and then proceed through the areas where the bulls are located and they’ll take you to another trapped dragon, Devlin.

Follow the path along the side of the town square to reach the outer edge of the map, which will then take you to the upper levels of the square. There you’ll need to free Thor from captivity.

Hop down into the area with the water fountain and a bunch of bulls where you’ll be able to free your final dragon, which should bring your total to 15. You’ll then be able to return to the Artisans through the portal. 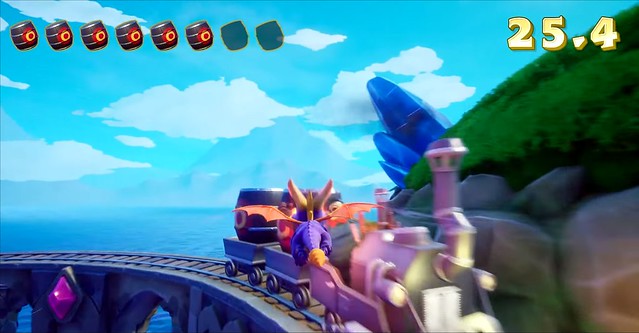 Head across to the other side of the map where the makeshift pond is located near the two waterfalls to enter into Sunny Flight. The objective of this map is to fly through the map along the train tracks and blast all of the explosive barrels on the trains and then collect all of the treasure chests inside of the cove.

As you get the treasure chests and the barrels it will add more time to your overall timer, which will countdown as you fly through the stage. Follow the arches along the outside of the islands to collect the time until you reach the planes circling more of the archways. Blow up the planes to complete the stage. 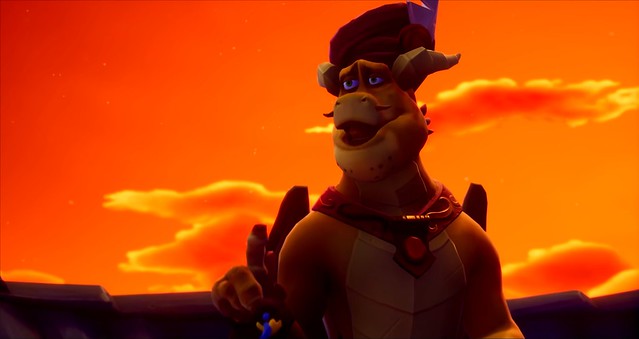 Just over the hill across from the Sunny Flight stage you’ll find the next stage, Toasty. Once you enter there are some evil wizards. Roast them up along with their ugly looking dogs.

Keep collecting the crystals and treasure boxes while roasting the dogs and their raggedy-clothed wizards. Head inside the tower and follow the pathway outside to collect more of the coins and kill more of the wizards. There’s also a dragon just outside the tower named Nevin.

You’ll find that Toasty is a scarecrow that’s been put in charge of the area. However, he’s just a weakling on stilts. Jump up and roast him to destroy his disguise and then chase him down and finish him off to unlock the portal back to the Artisans world.

Once you complete the Toasty world you’ll be able to go talk to Marco at the docks and take an air balloon ride to the Peacekeeper’s World. 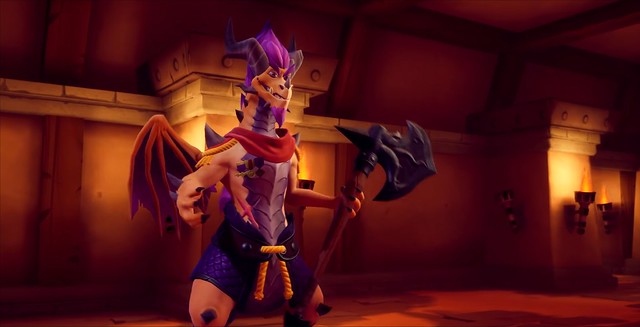 Once the game gets done loading, free Titan, who will then inform you to collect treasure within the main hub world.

The Peacekeepers’ World is another world hub. There are several other dragons located around the area, including three additional dragons in the main hub world.

Go through and burn up all the tents and the ogres, and you’ll eventually come across another dragon, Magnus.

You’ll find the final dragon in the overworld, Gunnar, across the ridge that you cleared out using the cannon.

The key that you collect can be used to gather up all the crystals and unlock the silver chest inside of the cave just beyond the oily pond. Once you get all the coins and free all the dragons it’s time to head to the next stage. 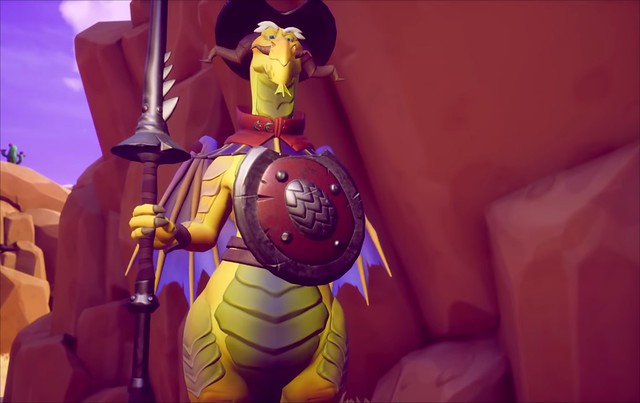 The first main stage you’ll want to visit in the Peacekeepers’ World is the Dry Canyon. The enemies here are armored and shielded. You’ll have to use Spyro’s jumping charge attack to dispatch them.

Follow the path around until you reach Conan, the first captured dragon. Move along the ridges and you’ll encounter Boris, who is along a pathway that will take you through the canyon that leads up a winding path toward Maximos and a key.

Proceed through the stage until you reach a cave – kill all of the bad guys inside the cave and on the other side is a tower. Inside the tower is the final dragon you’ll need to free in the stage.

Head around to the outer edge of the stage to collect more crystals and glide across to a platform with a chest that has an extra life inside. Proceed to glide to the small island cliff, if you want, to get a few more crystals. Otherwise, make your way the ledges on the other side that will take you across a bridge and into the area where the portal is that brings you back to the Peacekeepers’ World.