Jujubee Games’ KURSK recently dropped for PC. It’s a game based on real life events that took place back on August 12th, 2000 during a Russian nuclear submarine exercise in the Barents Sea. For gamers who picked up a copy of this edutainment title and need a bit of help with getting through it, there is a walkthrough available.

YouTube SweepersTonyandNox has a short playlist available for the game, which only clocks in at two and a half hours. You can check it out below.

The game centers around the real life tragedy that claimed the lives of over 100 people. Players take on the role of a fictional character who infiltrated the submarine as a spy.

You’ll start inside the main character’s room. You can start by opening up the supply closet and you can take out the game from the whatmenot box. As you begin to play the game the submarine will encounter a catastrophic event.

Bend down to the right of the sink and grab the small piece of cardboard.

Pick up the staple gun from the center of the floor after it fell out of the box. Take the staple gun and fix the cardboard over the air vent next to the bed.

Look up just above the door and there’s a pipe. Press ‘E’ to grab the pipe and use it to pry the door open.

Another crew mate will come to the door, you can talk to him about getting the door open or ask about the accident. Press ‘E’ to force the door open.

A flashback sequence will commence. Examine the disk on the table, the shoes on the floor and turn on the TV. 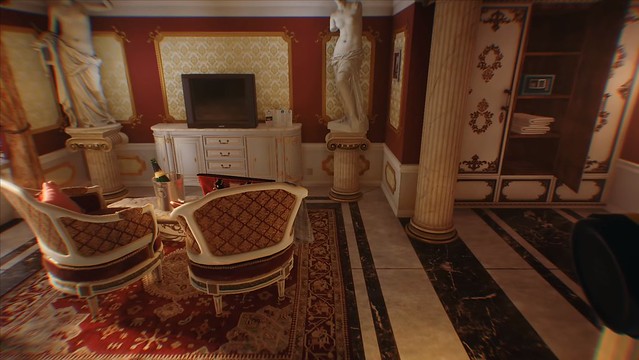 The phone will ring and you’ll need to go pick it up; it’s over by the bed. The man on the phone will give you the code for the safe, which is 5858233.

Take the PDA over to the laptop on the table.

There’s a briefing on the PDA that there’s a new Russian torpedo the Shkval.

Once the briefing ends there’s a loading scene followed by a driving sequence out in the countryside. You can talk to the driver about his life as a seaman.

After you get done asking him questions about life, marriage, and getting along with the crew on the sub, you’ll meet another member of the crew at the dock.

You can ask a few questions as well as look around the dock. You can run by using the right Shift button.

Head to the unoccupied truck in the corner and take the orange canister inside. Move the wooden crate out of the way and then use the lockpick mechanic to spring the lock. Attach the camera to the PDA and snap a photo of the blades inside the crate.

Once you get done looking around the dock, go talk to the crew mate standing outside the sub and let him know that you’re ready to depart. 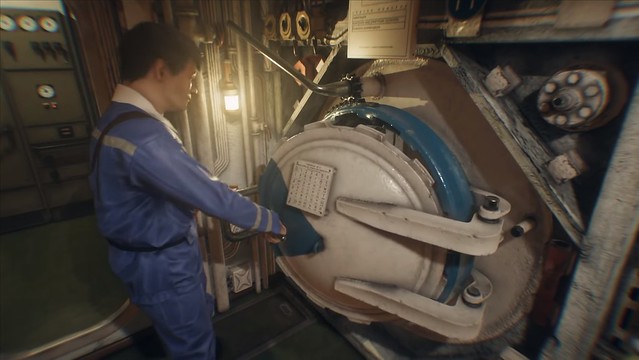 Follow the dude through the sub and down the hatch, past the tunnel and into the crew quarters to your room.

While unpacking your things, the quartermaster will come in and introduce himself. He’ll ask you where you grew up and which academy you went to, and you’ll be able to choose between Marshal Grechko or Admiral Kuznetsov.

Follow the crew mate up to the bridge and talk to the captain.

You’ll then need to head to the fairwater, and so you’ll need to proceed around to the ladder.

Head up top to intertact with the battle commander and the computer specialist. They will let you know that they like first-person shooter games, like typical Russians, and that you can play their arcade game in the mess hall when you get a chance.

Go over to the edge and look at the view by pressing ‘E’ and then head back down into the sub.

Talk to the captain and ask him about the torpedoes, and then you proceed to look around the ship, as well as carry out the assignment by the captain to talk to the weapons operator at the bottom of the sub.

Exit the bridge, head back down to the lower deck, and proceed into the armory.

Use the PDA on the torpedo and take a picture.

Head to the front of the room and there’s a ladder, head down to the very bottom deck and you’ll find the weapons operator there. Tell him that the captain sent you.

Once you complete that task, head back up to the top of the sub and tell the captain about the issue with the targeting computer.

Leave the engine room and go to the rec room where the arcade machines are located. You’ll find Vasiliy on the couch smoking a cigarette. Talk to him about the targeting module being broken.

Head back down to the weapons engineer and he’ll tell you to talk to Maxim, who will then tell you where to get some spare targeting modules to replace the broken ones.

You’ll find Maxim in the armory with all the torpedoes, he’s standing by idly looking like he doesn’t have a care in the world. He’ll tell you that there are two spare modules inside the storage comparment.

Exit the armory and head all the way around to the other side of the sub to access the storage facility. You’ll need to head to the storage room with the three symbols on the door and it will have the module inside on the shelf. Take the module off the shelf and make your way all the way back around to Vasiliy, who is located in the engine room at his workstation.

He’ll be angry at you for the captain reprimanding him, but he’ll repair the module and give you the repaired board.

Leave the engine room and make your way all the back to the armory where the torpedoes are stored.

Put the fixed module back into the torpedo and then go downstairs and tell the weapons chief that the module has been repaired.

Once the weapon test is finished, you’ll need to proceed back up to the top of the submarine and inform Captain Ilya that the weapons are repaired.

He’ll dismiss you from your duties after thanking you for your help. You’ll need to seek out the captain’s training schedule, which is located in the captain’s quarters.

The captain’s quarters will be locked, so you’ll need to venture to the clean-up duty to see if you can retrieve the key. Go into the mess room and look at the paper, it will reveal that Ruslan has the keys and he’s located in the technical room.

Talk to Ruslan about diddle-daddle, until you can ask them if he has the keys on him in his swim trunks, he’ll reveal that the keys are located in his locker in the changing room.

Exit the pool, go back to the locker and use the lockpick kit to gain access to the lockers. The keys are located in the second to last locker on the northeast side of the room. Take the keys, head upstairs, go into the captain’s quarters and you’ll need to access the computer.

Proceed to grab the info for the schedule by taking a snapshot.

From there you’ll need to return Ruslan’s keys in the locker, and then head up to the deck where they’ve requested your presence.

Head back upstairs, grab the documents and take them to their designated location.