TheMeatly Games’ Bendy And The Ink Machine turned out to be a huge surprise hit of 2018. The game is a first-person horror title that has unfolded its story across a five-part episodic adventure. In order to wrap up the final episode of the journey, the developers decided to give away Chapter 5 for free. For gamers who picked up a digital copy of the latest and last entry in the horror series, there is a gameplay walkthrough guide available for Bendy And The Ink Machine: Chapter 5 – The Last Reel.

YouTuber MediaGamesGuide has up a near 50 minute walkthrough video of the final entry in the series, which you can check out below.

The episode starts with the player-character, Henry, waking up in a workshop where a short cinematic will play where Henry meets Alice, who is making markings on the wall.

Tom is given the job of watching over Henry while Alice heads up top.

When the ink demon arrives, Henry is left as fodder for the demon. You can use the glass light to see the messages on the wall, which give you a lot of clues on how to exit the cell. Activate the spoon on the wall and go into the bathroom. Inside the toilet there’s a lead pipe. Take the pipe and bust open the wooden barricade. There are some canisters on the shelf; take them.

Exit the room and use the pipe to beat up the ink monster that attempts to form in the puddle.

Follow the pathway out of the hall and into the next room. Flip the lever to release the makeshift boat into the ink river. Use the throttle to and hold it forward to move through the tunnels.

A giant hand will begin to follow Henry through the tunnel; be sure to knock off the ink gunk as quickly as possible before the hand reaches up and grabs you.

Make your way to the docks and disembark from the boat.

You can use the light glass to look for the hidden messages scribbled across the area. 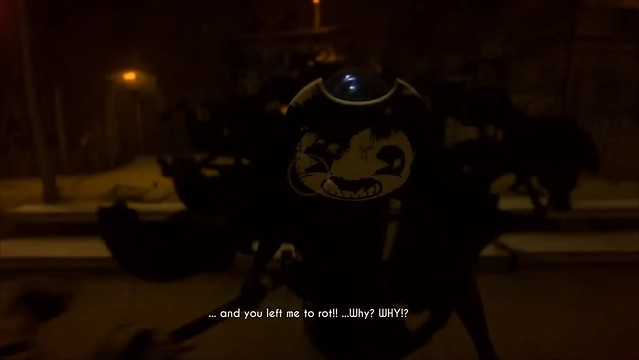 Keep hitting the ink boss until he begins to cry. Go near him to trigger a cinematic sequence.

Afterward, there’s an arena-style battle where Alice and Tom will help you fight off hordes of ink monsters.

It’s a lot like the Call of Duty zombies mode, so make sure you hit them and run – kill one and then run around. You can also kite the ink monsters around until your life replenishes.

You’ll need to fight off the waves for several minutes until the puddles dissipate.

Move across the planks and Henry will fall into an ink vat. 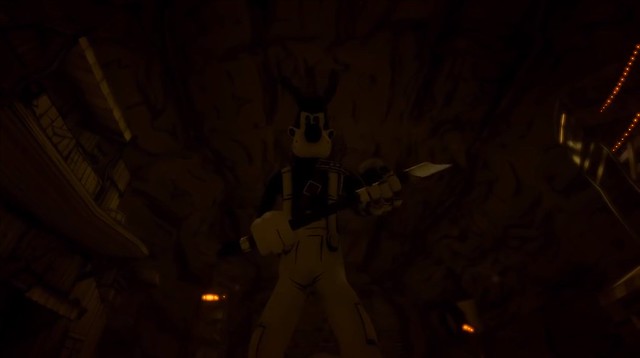 Go into the office and clock in, and then go into the reception area and pull the lever.

Head into the hallway and watch out for a patrolling ink cyborg.

You’ll need to dodge the monster and go through the winding halls to reach the ink pool near the main office. Take a blob of ink.

Go back to the main foyer and place the ink blob into the processing machine and make a piece to fit into the broken ink machine to repair it. You’ll need to make three pieces, which will goin back and forth to the machine through the halls while dodging the ink monsters.

Use the ink processor to select the piece you want and then pull the switch on the left side of the machine to create it.

Beware that the ink demon will also mosey around the area so you’ll need to hide in the locker in the main foyer to avoid being consumed by it.

Head through the film vault door and then proceed past the broken vault. 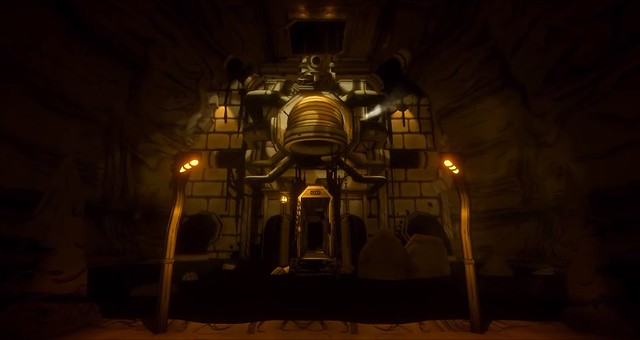 Henry will have to head into the machine alone.

Head up to the throne and another cinematic will play that reveals that the ink demon is actually the shadow of Bendy; a figment of a bygone era trapped in nothing but the anguish and remnants of a long forgotten past. Henry is told that the only way to fix it is to show Bendy “The End”.

Take the “The End” film reel and the final battle against Bendy The Demon will commence. 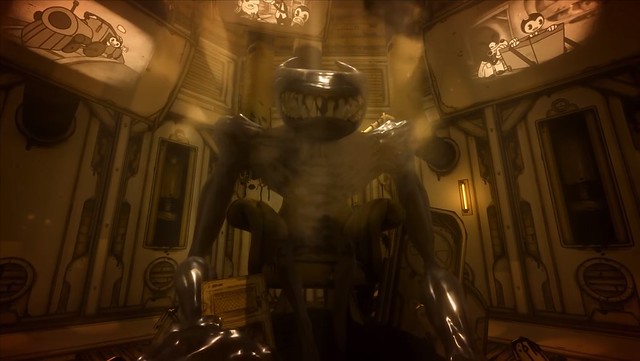 Make your way through the ink gallery and you’ll need to dodge Bendy, who will come out of ink portals and run at blinding speeds in a stright direction down the hall. Flip the glowing levers on the wall until a pathway opens up leading down a hallway into a room with a sign that reads “Who’s Laughing Now?”

When you get into the room, you’ll need to get Bendy to chase you by running into the glass tubes. Get Bendy to ram the tubes to break them and cause the ink to spill out.

After all the tubes are broken, make your way through the doorway where the light is glowing and head back to the throne and activate the projector by playing “The End”.

This will literally play “The End” and it will destroy Bendy The Ink Demon.

The game ends with a flashback of Henry’s former boss, Joey, inviting him to the old ink workshop.