The release of Shadow of the Tomb Raider happened with almost barely a peep. The game is literally more of the same from Rise of the Tomb Raider but decides to finally finish up the trilogy of the new Lara Croft. For those wondering how it all ends, this article will explain the ending.

The core of the game centers around finding a hidden temple located in the Peruvian jungle. It all starts with Lara Croft and her friend Jonah exploring ruins in Central America. After Lara acquires a rare dagger before Dr. Pedro Dominguez and the rest of Trinity can acquire it, a tsunami is triggered and the village is wiped out. Dr. Dominguez manages to acquire the dagger and flies off to Peru to find a hidden city.

Lara and Jonah attempt to beat Trinity to the city, but their plane goes down in a storm and the pilot is then eaten alive and ripped apart by man-eating jaguars.

Lara and Jonah manage to escape the jaguar den after Lara kills the two beasts, and then he helps out a few of the locals before racing Trinity to the dig site at the hidden temple.

Lara sneaks through Trinity’s camp and discovers that their main plan is to recruit her into the fold and acquire any information that they can from Lara regarding Richard Croft, her father.

With the help of a local named Abby Ortez, Lara and Jonah navigate through the thick Peruvian jungles and into the heart of the hidden temple.

Along the way, they discover that Trinity’s mercenaries are being hunted by another cannibal tribe.

Lara overcomes the trials of the spirit guides in order to progress further into the Hidden City of Paititi, which leads her into a quarrelsome encounter between cultists and some villagers.

Lara saves one of the villagers, which turns out to be the son of Queen Unuratu, the rebel leader for the residents of Paititi.

In the city, Lara discovers that Dr. Pedro Dominguez is actually named Amaru, and he was originally raised in Paititi. It turns out that Amaru/Dominguez was the brother of Unuratu’s husband, who was killed.

Dr. Dominguez plans on recovering the second artifact, a box, in order to perform a sacrifice at the top of the temple so that he can reshape the world.

Queen Unuratu has been leading the rebels against Trinity, who have had a presence in Paititi for centuries and are known in those parts as “cultists”. They’re basically a low-rent version of the Templars from Assassin’s Creed.

The Cultists have been sacrificing bodies throughout the ages to please the gods.

The Cultist capture Unuratu’s son but Lara helps get him free only for Unuratu to get captured. Deeper into the jungle she encounters another hidden temple within the hidden city that has the box. However, the box is being guarded by some cannibals – the same creatures that have been killing Trinity’s soldiers, known as Yaaxil.

When Lara attempts to retrieve the box she discovers that it’s missing. It turns out that the box had been stolen several hundred years in the past by a missionary and hidden away outside of Paititi to prevent Trinity from accessing the box.

While attempting to raid the old king’s tomb for another clue in order to restore the sun and prevent Trinity from reshaping the world, Queen Unuratu is killed by Commander Rourke.

Unurato entrusts Lara with ensuring that Etzli becomes the rightful heir of Paititi.

Jonah and Lara attempt to track down clues at a small town in Peru. However, the duo gets attacked by a helicopter.

Following a violent waylay by Trinity, with Lara undergoing a psychotic PTSD break and murdering everyone at a refinery, both Jonah and Lara finally reach the Christian mission and finally discover the location of the box.

Jonah and Lara retrieve the box, Ix Chel, but Dominguez and Rourke manage to steal the box from them, causing a landslide in the village.

Dominguez also reveals to Lara during their encounter that he had her father killed because her father was on the verge of discovering Paititi and having the outside world travel to the hidden city, which Dominguez couldn’t allow.

Lara tracks down Dominguez and faces off against him before he can complete the ceremony, killing him in the process. In his dying words, Dominguez tells Lara to protect Paititi, which is really all he was trying to do.

Lara is tasked with restoring the sun to Paititi by becoming a god, she does so by absorbing the power from the knife. The leader of the Yaaxil, Crimson Fire, takes the knife and attempts to stab Lara as a sacrifice. The knife doesn’t stab Lara, though, and white light beams out from her body instead.

After saving Paititi Lara helps them rebuild and then heads back home to her mansion where her butler serves her tea. As the after-credit scene fades out, we get a shot of an old drawing from when Lara was a child, showing a pyramid with a dinosaur, which is an Easter egg reference to the original trilogy from the PSX era. 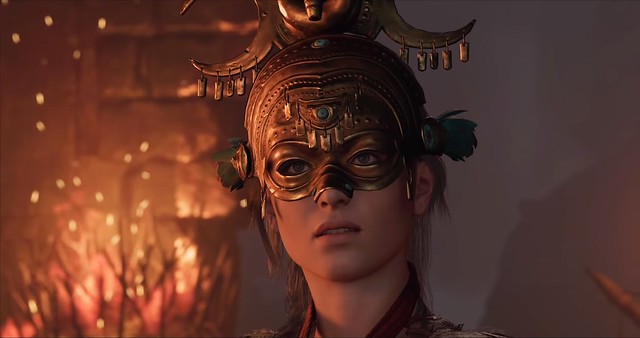 TL;DR: Dr. Pedro Dominguez grew up in a secret, ancient village known as Paititi. It was cut off from the rest of the world. There were prophecies that the village would one day be destroyed. After venturing around the world as he got older, Dominguez worried that one day colonizers, natural disasters, or invaders would destroy Paititi, so he felt compelled to fulfill another prophecy about reshaping the world to protect Paititi and his people from the outside world. In order to do so, it requires a special box and a mythical dagger.

Lara Croft attempts to stop Dominguez because she doesn’t want him to reshape the world, and she works with two tribal queens to take down his men, kill Dominguez and complete the ritual herself. The game ends with Lara enjoying life back at her mansion after causing massive destruction and death to Paititi.