During the September Games With Gold offerings Microsoft decided to bundle an oldie but a goodie in with the Xbox Live Gold subscription games. One of those games included TT Games and Warner Bros. Interactive Entertainment’s Lego Star Wars 3. For gamers who missed out on the Xbox 360 co-op adventure title when it came out back in 2011, there’s a gameplay walkthrough guide available now that it’s backwards compatible and ready to play on the Xbox One.

YouTuber packattack04082 put together a massive 63 video playlist covering Lego Star Wars 3: The Clone Wars from start to finish. You can check out the video walkthrough below.

Once you start a new game it will save your game and then give you the typical scrolling crawl to explain what’s going on and what sort of kick-buttery you’re about to unleash.

The game starts in the Geonosian execution arena with Obi-Wan chained up, Anakin and Padme about to kiss, and a punch of Geonosian’s cheering on their deaths.

It’s funny because this is before TT Games started using voice acting for their games.

At the start of the game you’ll need to press and hold the ‘B’ button on the Xbox One controller to force the acklay back and then use the Force on the pillar to climb up with Obi-Wan.

Press ‘Y’ on the controller to switch to the second character if you’re playing single-player. Alternatively you can connect a second controller and have the second player control Padme.

After you subdue the Reek using ‘B’ on it (which seems to do everything) you can mount it by tapping ‘Y’ when standing next to it. 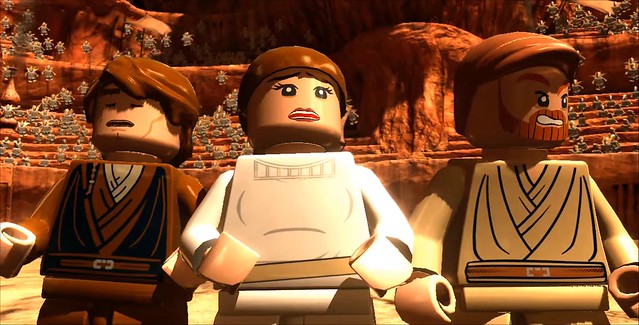 Charge the nearby objects to collect the coins and then take out the other beasts to trigger the next segment.

If you’re playing two player you’ll need to use Padme and Obi-Wan to cooperatively take down the Acklay by using Padme to subdue it and Obi-Wan to stab it.

After you cut off the Acklay’s leg, use Padme and press ‘B’ on its stump to grapple it and subdue it. Then move Obi-Wan under the blue icon to damage the Acklay.

During the Jango Fett fight, use Anakin to throw the lightsaber at him by holding down ‘X’ once he’s in range. When you hit him with the lightsaber he’ll fall to the ground; proceed to attack him while he’s on the ground until he dies, triggering another cinematic.

You’ll start with Mace Window and another Jedi. Your objective is to destroy all the buildings in the area.

You can use the speeder to quickly get around the map.

There are a lot of enemies about and your goal will be to destroy the fuel stations scattered around the map. They have a yellow life bar. They’re easiest to destroy with a vehicle, so try to grab a tank and blow them up.

You’ll need to destroy five of the stations to complete the mission.

You’ll unlock Kit Fisto, Ki, and Mace for your efforts.

The next mission for Count Dooku’s volume takes Anakin and Obi-Wan to the planet of Florrum.

Jar-Jar Binks is sent to rescue Obi-Wan, Anakin and Count Dooku from the Florrum pirates.

You’ll play as Jar-Jar Binks and you can ride the local wildlife while you attempt to reach the others. Much like Mace Windu’s mission, you’ll need to disable the shield generators and then take out the power towers.

It can be a tedious mission given that the only way to get into the larger vehicles you’ll need to use the animals to boost-ram them so that the pilots fly out.

The next mission involves flying in the LA-AT and boarding the star destroyers to take out the Separatists droids.

Fly the ship up over the cross and press ‘B’ to land on the pad. Take out the droids and then climb up the platform and push the power coupling along the path and connect it to the giant water hose so it can put out the fire.

get back into the ship and fly to the next landing spot.

Once you land move around to the side of the ship and there will be a blue Jedi icon on the ground. Stand on it and cut a hole in the wall to turn on the giant water hose.

Once you get done with the second hose, hop back into your ship and fly to the front of the ship.

Take out the droids and then make your way along the walkaway. Use the Force to repair the bridge and then get to the other side and activate the power switch.

Once you activate all three water hoses a cinematic will play, but the destroyer class ship will blow up anyways.

After a short cinematic plays, fly the LA-AT to the landing pad and repair the torpedo generator and flip the power switch.

Once the LA-AT gets the torpedoes, use them to blow up the purple targets.

Make your way through the ship and you’ll finally take control of Ahsoka. Use the Republic Cruiser to destroy the purple targets on the Separatist destroyer to end the mission.

Before you can take over the base you first have to disable the shield generator. You may need some extra reinforcements so destroy all the buildings on the red bases to take them over so you can then build a vehicle to use against the other forces.

Be sure to use large turret cannons to take out all of the enemy base buildings and then take out the turret to complete the stage.

Your next mission will see you taking Anakin and Ahsoka going to a weapons factory on Geonosis in order to take down Peggle the Lesser.

You start with Anakin and you need to take over an enemy base. Just like with the other missions, you’ll need to destroy all of the base buildings first.

As you take over the bases and build up Lego points, you can unlock more gear, more soldiers, and more troops to command.

Use the troops under your command to target and destroy objects by directing them toward an object and holding down ‘X’.

Once you take over all of the bases you’ll then take control of Ahsoka and head inside cave.

Use the smash attack to knock the Tri-Force symbols off the wall and then connect the three pieces to the other side of the wall using the Force.

Make your way deeper into the cave and proceed to take out the Geonosians along the way.

Use ‘B’ to rebuild the trampoline in the center of the map and then use it to hop up to the next area.

You’ll have to activate all of the power banks around the stage while taking out the Separatists droids in order to complete the level.