Warhorse Studios released a new bit of DLC for Kingdom Come: Deliverance called From The Ashes. It continues the story of Henry’s rise to up the ranks of nobility as he attempts to fix some of the damage that was done from the border-breaking Cumans. For gamers in need of a little bit of help and guidance on making their way through the new DLC, there is a walkthrough guide available.

YouTuber GameRiot did a walkthrough video series about From The Ashes and you can check it out below.

The DLC picks up after the events of Pribyslavitz being destroyed and Henry managing to save the residents of Talmberg.

Henry decides to restore the glory of Pribyslavitz, and make the small village great again.

Once you start the DLC, travel to Talmberg and talk to Sir Divish.

Take on the Lost In The Woods quest and travel to the camp and take out the enemies encamped at the church.

Take out the enemies at the camp and free Sir Divish’s locator.

Follow around the locator who will give you a layout of where you can build certain structures.

It takes around 10 minutes to complete the mission. After the locator does his job there is another cinematic sequence that will play as Sir Divish arrives at the site.

If you’re good at persuasion, when Divish acts about the captors, you can squeeze 600 groschen out of him.

Anyway, at the end of the Pribyslavitz long cinematic, Henry will be upgraded to bailiff of the county.

You’ll be in charge of building out the village, but first you need to deliver a letter to the Bailiff at Rattay.

You’ll find the bailiff inside the upper room of the inner keep.

The bailiff will go outside and make an announcement about the news about Pribyslavitz.

After the announcement is made, you’ll receive a quest called “A Place To Call Home”. 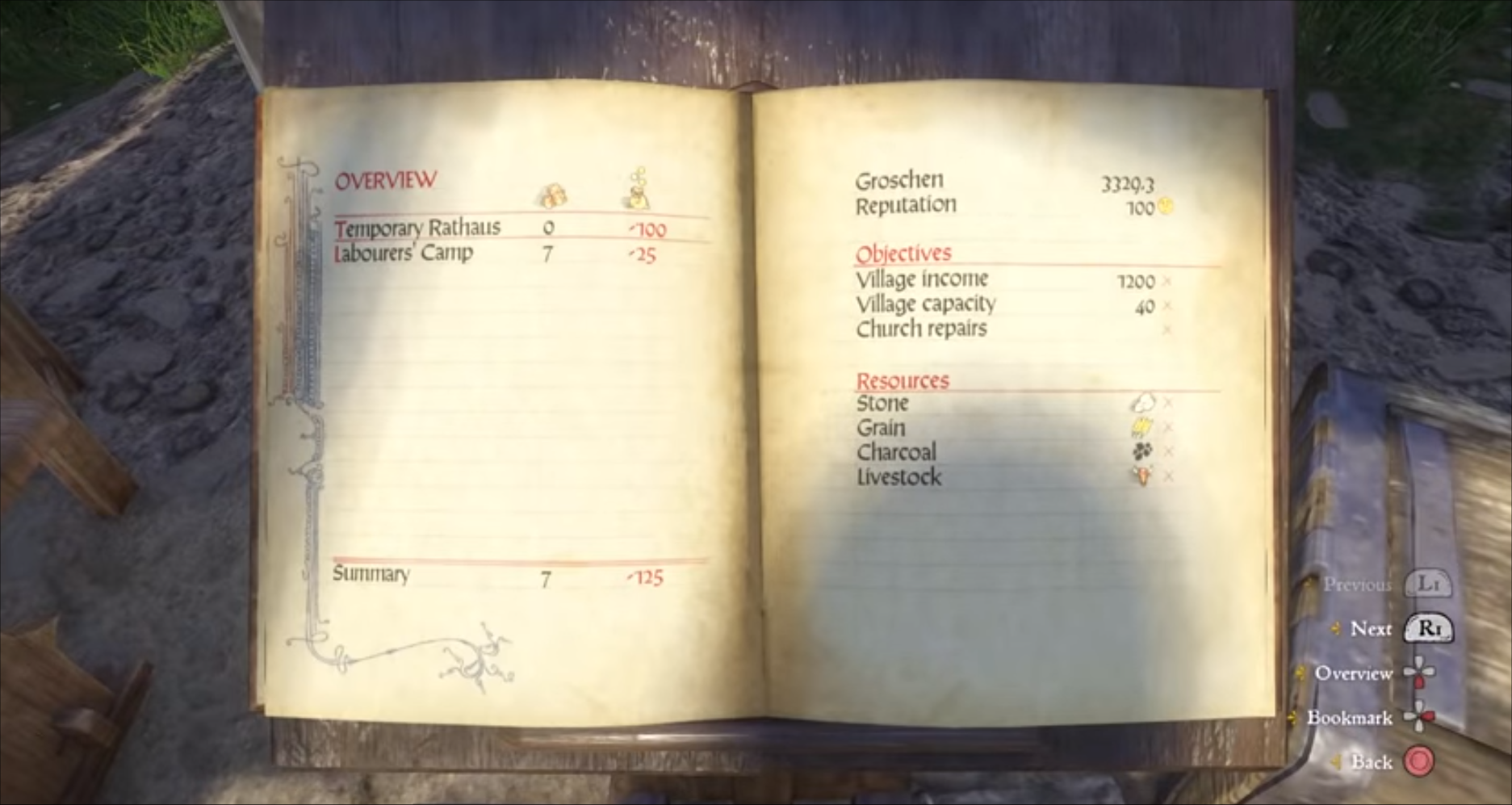 How To Build In Kingdom Come Deliverance

First and foremost, go talk to the Locator to work out the wages with him.

Then proceed to check the ledger, which is on the stand next to the Locator.

From here, you’ll be able to check to see what resources are required to build different structures. You’ll need to place the items necessary for the structure inside of the resource chest.

It’s smart to start with small buildings first. The cheapest buildings are around 1,500 gold. When you’re ready to build the item you can hold down ‘X’ on the Xbox Controller or ‘Square’ on the DualShock 4 to automatically start the building process. Alternatively you can go talk to the Locator and tell him that you’re ready to build. Select the structure from the list and he will guide you to the location where it can be built. If you’re satisfied, you can instruct him to start building.

You’ll also likely want to build a trading post as soon as possible so you can trade goods with the trader for a few extra coin.

In between building structures you can handle some of the affairs within Pribyslavitz. Go over to the bailiff stand under the tree where the quest exclamation mark is located and it will begin bailiff missions.

The bailiff missions essentially will allow you to meddle with the affairs of the locals.

You won’t really make much progress from the bailiff missions, as there isn’t much coin to be gathered from such a thing.

You’ll also need to stock up on supplies. You can acquire some of the hay bale for Pribyslavitz by visiting the bailiff in Uzhits. You can purchase the supplies you’ll need for 160 groschen.

The more supplies you gather the easier it will be to rebuild certain structures.

How To Make Money

The more you build the more villagers will will settle in and the more money you’ll make. It will require a lot of resources, however. So you’ll need at least 10,000 to invest in order to start making some real progress.

YouTuber Determine8R Gaming offers a way to make legal money in the game. He notes that before you start the main quest missions during mid-game, you will likely want to return to Pribyslavitz and kill everyone there and loot the bodies and sell their stuff.

Additionally, take all the herbs and items you can gather from the area and sell whatever it is you don’t need.

If you’re planning on using this method to level-up and gain gold, you may want to first acquire a horse with saddlebags so you can carry a bunch of stuff into town and sell it.

Since it’s all Cumans and bandits in the area you won’t lose reputation and you don’t have to worry about building up any bad standings.

This is a method that works well for Kingdom Come: Deliverance after patch 1.5.

Alternatively you can always fire up the ‘ole Kingdom Come cheat trainer and call it a day.

Kingdom Come: Deliverance – From The Ashes is currently available right now for PC, PS4 and Xbox One.