[Disclosure: A review code was provided for the contents of this article]

Whilst the original Hand of Fate was a somewhat quirky, offbeat hit that should have really appealed to me, I never actually got around to playing it. It currently resides among countless other “Games with Gold” that have been downloaded to my Xbox One and then left to languish, probably because whilst I love the core concept, I’ve read a lot about the flaws of the first game and never felt the need to actually experience them. Now, with  the prospect of getting my teeth into a (presumably) much improved sequel, it’s finally time for me to deal with The Hand of Fate franchise.

For those who are not familiar with the two games in the series, Hand of Fate is a fantasy game that takes place on a single table, with each level (or challenge as the game refers to them) dealt onto the table by a pretty shifty looking goblin croupier. The player then navigates their way around the sequence of cards one at a time with a view to completing some kind of overarching objective, which usually boils down to collecting a certain number of something (artifacts, blessings etc) or amassing a fixed amount of prestige or gold before going somewhere to defeat a boss. As you flip cards on the board, one of several things can happen and on many occasions, combat encounters will spawn, forcing the player to fight a random number of enemies in a third person, arena style map. 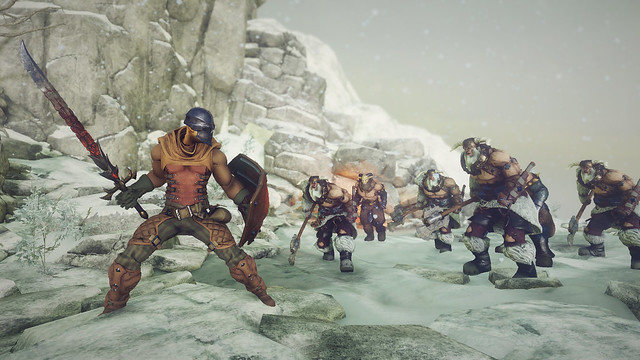 Hand of Fate 2 seems to openly acknowledge the flaws of the first game, because among a reasonably broad repertoire of other suitably mysterious quips, the Goblin often advises us that “this part of the game has changed” or “I’ve improved the game in this area.” I quite liked the g game within a game feel and somehow it gave the Dealer a sense of credibility that the usual dungeon master type of character will often lack in similar games. His voiceover also serves to provide one of the neatest tutorials (especially given the weird construct of the game) that I’ve seen in ages, with him simply cracking on and filling you in on rules and mechanics as they occur.

One of the first things that we learn is that there are 22 challenges in Hand of Fate 2 (in addition to an endless mode that isn’t currently available to test), all of which take place on a single board that is slowly revealed as you progress. As a result, Hand of Fate 2 is quite a sizeable game, with each challenge taking something like 30 to 90 minutes to complete if you factor in the fact that you will inevitably need to retry some of them. You see, both the Hand of Fate games are kind of like rogue-lite’s in that if you die during a challenge, you will be restarting it again from the beginning. In some challenges, there are tokens that can be redeemed for new cards at the end, whether you win or lose and these often allow you to weight the deck slightly in your favour.

On that note, the deckbuilding mechanic in Hand of Fate 2 is perhaps one of its most unique features and yet, for me at least, it was also a cause of great confusion. At the beginning of each challenge, you’ll be asked to contribute cards to several decks that the dealer will draw from throughout the game. Cards can include weapons and armour, encounters, companions and more other more niche examples like blessings and enchantments. The issue I found was, there isn’t much obvious rhyme or reason about when these cards come out or how they help in all cases, which sort of makes the exercise of choosing them feel pointless. 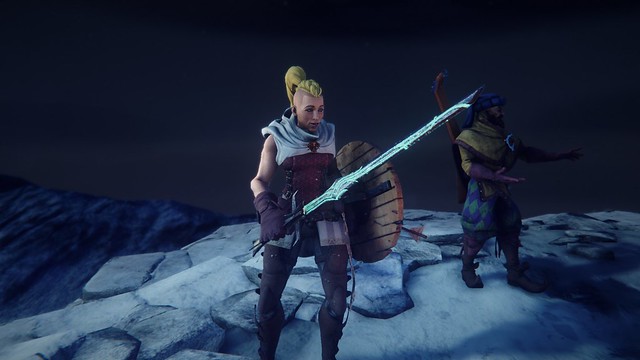 Some are simple of course, which actually helps to prove the rule. Whichever companion you use will indeed appear to support you in combat and will influence some situations outside fights, such as adding an additional dice to rolling challenges. Rather than being added to an ever expanding armoury of equipment that you retain however, equipment cards are folded into the Goblin’s deck to be drawn from at merchants or in reward for completing certain challenges. Encounter cards, for example, are added to a deck of other, unknown encounter cards, so whilst you can influence the deck, you never control it entirely.

I found this approach a little frustrating, in all honesty. Beginning each challenge with more or less the same crap gear that you began the last with is less than fun, especially considering that over the course of each challenge, you’re likely to be able to draw various cards that increase your chances of survival. Similarly, there is no central character development, so there are no stats to upgrade or improve and because you never really control a deck of your own, there isn’t actually a mechanic for improving yourself from one challenge to the next.

I really felt like this was such a key omission that I second guessed my interpretation of the game and spent quite a while working through the decks and options just to make sure that I hadn’t missed some kind of glaringly obvious inventory or progression screen. Alas, the only thing I could find was the Supplies Deck, which allows players to add a very small number of cards to their starting inventory, from a starting selection that is considerably less powerful than those you’ll be seeing in the main deck(s.) 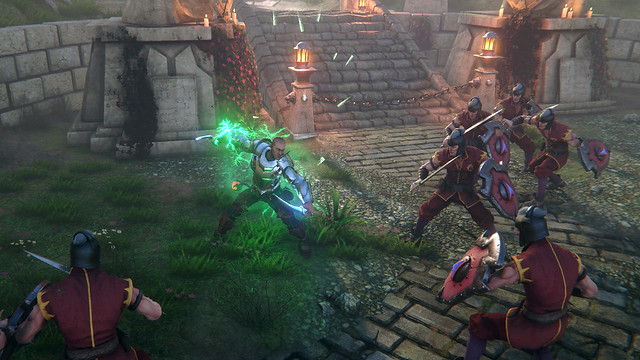 Another issue is the repetitive nature of combat, which is an unavoidable feature of each challenge. Combat takes place between the player character and a single companion (chosen via the Companion Deck) and any number of enemies within an array of small arenas. The available stages are actually quite varied and are almost always appropriately themed based on the current story beat, but whichever one happens to load, you can be assured it will be a brief and compact encounter. Enemy variety is not huge, but the number and mix of enemies is fairly nicely randomised and each of the bad guys has his own strengths and weaknesses.

The problem with combat is that whilst it looks quite decent and works well enough, it boils down to an incredibly basic and unchanging set of strategies. Attacks are limited to a basic swing, a dodge, a block/parry and a special attack, plus a few contextual actions such as a companion special move and a finisher for downed opponents. The game provides a clear tell when enemies are launching attacks, with a red icon for unblockable ones and a green icon for those that can be parried. For the most part, combat is very straightforward and even on later Challenges, you’ll be able to progress without taking a single hit on most occasions.

I was also a bit turned off by the number of luck based sequences in Hand of Fate 2. There are several luck and skill tests that spawn based on specific cards. The skill ones – timing the swing of a pendulum or stopping a spinning fan of cards at the right moment – aren’t too bad, but the purely luck based ones are annoying. These include tests like picking a single success card randomly from a deck of four, or rolling three dice against a target number. 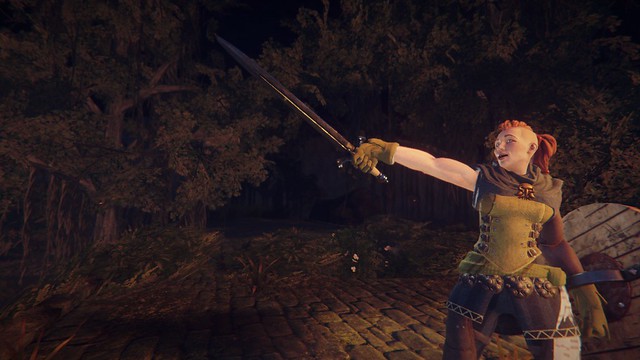 As with any game like this, you will experience runs of good and bad luck, but what I found annoying about Hand of Fate 2 is the fact that some of the key quests rely heavily on these mechanics, meaning that you can sometimes fail due to absolutely no fault of your own. Fans of the series will call this out as a feature which I can understand,  but I just don’t buy it.

Looking back at this review, I do feel as if I’ve called out a lot of issues with Hand of Fate 2, yet I did persevere through the whole game and in between bouts of extreme frustration, I actually quite enjoyed it.

It is a thematic and fun concept and principally, I do like card and deckbuilding games. The combat may be repetitive, but it is also brief and mechanically sound. My biggest frustration, which is undoubtedly to do with the poor way in which progression is handled, is probably the only one that I consider to be materially damaging.

Whilst it appears to be similar to the first game, Hand of Fate 2 remains a fairly unique concept that brings a lot of new ideas to the fantasy genre, but because of its nature and the presence of luck based outcomes, it won’t be for everyone. As a result, Hand of Fate 2 is an easy: