152195-16cookie-checkBatman: The Enemy Within Season 2 – Episode 3 Walkthrough And Choicesno
Media

Batman: The Enemy Within Season 2 – Episode 3 Walkthrough And Choices

When Catwoman arrives, you can ask her why she came back. Showing her affection will make her remember it.

During the segment with Harley threatening the members, if you tell her that you’re on her side she’ll remember that.

You can also ask Harley to see the laptop, but she won’t let Bruce see it until he gets the black site location for her. 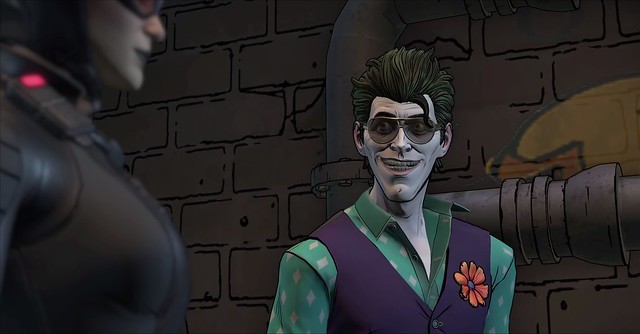 Bruce will get a call from Waller, where you’ll have the option to tell Waller about Riddler’s eyes being the key or telling her about Catwoman.

When you go into the crime scene, you can either let the Joker knock out Bullock, or you can knock him out yourself. Alternatively you can bribe him with money. Bribing Bullock will work, but Bullock will remember that.

Inside of Riddler’s place, you’ll have to examine the room and talk to the Joker.

Use the cart to push the cage off the platform to begin the Riddler’s puzzle.

Move the cardboard off the pressure plate beneath the work bench.

Go upstairs and take the Riddler’s shoes. There’s a second pressure plate on the ground. Place one of the shoes on the plate upstairs.

Go back downstairs and place the second shoe on the pressure plate beneath the workbench.

Proceed to step on the red button switch.

Bruce and Catwoman will talk once more – you can tell Catwoman the real reason Bruce is there, or you can give her a fake answer. Additionally, she will give a compliment to Bruce – the option to compliment her or rebuff her is available. If you compliment her she will remember that, just the same as if you tell her it’s over.

While in the underground room, pick up the USB drive from over on the cabinet and put it into the computer. Bruce and Catwoman will fight – you’ll have the option to kiss or throw Catwoman during the QTE segment. If you attempt to kiss Catwoman she’ll kick and throw Bruce and the Joker will notice it. Alternatively, you can throw Catwoman.

After Catwoman escapes, Bruce and Joker will talk, and you’ll be able to give him advice.

Batman will be requested to meet Gordon on the roof. Gordon will blame Wayne and Catwoman for his troubles. If you push back against Gordon he will change his relationship with Batman. You’ll have the option to either warn Selina that Gordon is coming for her or let Gordon send a task force after her. If you attempted to bribe Bullock earlier on, Gordon will bring that up.

The Joker will be on the rooftop as well, and will ask Batman for his help. He will request to leave Harley alone. You can either oblige or reject the offer.

Back at the hideout, Bane will be interrogating Timothy. Timothy will ask Bruce to vouch for him. However, even if Bruce vouches for Timothy Bane will still kill him. Also if you attempt to check on Timothy, Bane will notice it. Since he dies anyway, you could technically preserve Bruce’s cover. If you tipped off Selina about the GCPD then she will steal the laptop from Harley and Bruce will suit up and meet with Selina on a rooftop.

If your goal is to pursue a relationship with Selina you’ll have the option to do so after they fight.

If you choose to partner up with Selina, you can choose to take her back to the Batcave.

After you finish talking to Alfred the computer scan will finish.

Bruce will discover the black site at Bodhi Spa in Gotham. 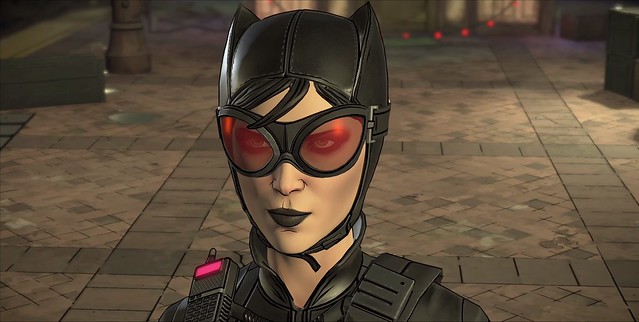 Waller will ask to meet Bruce at the tower. Tiffany will be there and will have called Gordon and the police. Waller will interrupt and dismiss Gordon for crossing her.

After Waller leaves, you’ll have the choice to tell Tiffany that Bruce Wayne is Batman. If you don’t tell Tiffany she will get angry, but if you tell Tiffany, she will offer to pick up where Lucius left off.

You’ll have the choice to either have Tiffany join the team or tell her it’s all too dangerous.

At the Bodhi Spa, use the thermal imaging to examine the area. Examine the security feeds by isolating the heat signatures and electrical conduits.

Once you finish the reconnaissance, Bane will be in the alleyway, stalking Bruce like Podesta stalks cheesy pizza outlets.

Tell Bane that Harley sent you and Harley will back Bruce up when Bane knocks him out and brings him to Harley.

Harley will question Bruce about his loyalty. Harley will bring in Joker to interrogate Bruce. You’ll have the choice to either rat out Catwoman or take the fall for her. Whatever you choose is how the episode ends.

Alternatively, RabidRetrospectGames has a video showcasing some of the other choices you can make throughout the episode along with the different endings for Episode 3. For instance, if you don’t warn Selina about the GCPD, the Joker will retrieve the laptop from Harley, and will meet Batman in the alleyway where you’ll be able to teach Joker how to use the Batarangs.

You can choose to help Joker get good by teaching him the ways of the Bat. This will increase the relationship between Batman and Joker.

If you chose not to help Selina, she will show up at Bruce’s mansion all banged up and injured. 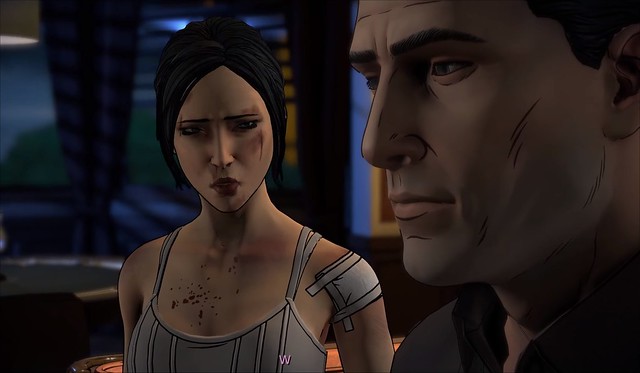 A fight will ensure if you don’t choose to have Bruce give himself over to Selina. This will result in Bruce physically beating the crap out of an already injured Selina, but Alfred comes in to break it up before Bruce further injures her. Bruce gets the briefcase and makes Selina leave the mansion like a ho who didn’t get a five dollar tip in the morning.