With gamers getting their fill of Total War: Warhammer 2 from Creative Assembly and Sega, some gamers have found themselves overwhelmed with all the possibilities, units, army tactics, and counter-offensives that can be taken to rout enemies, to outwit them, and eventually demolish them under your iron grip.

Well, to help aid you in your conquest is a Total War: Warhammer 2 High Elf army guide that breaks down each of the strengths and weaknesses of the High Elf army, and what you can expect when you engage them or when you play as them.

The guide starts with the hero and Lord, Tyrion. He’s a Cavalry class unit with an armored bonus, he’s a melee expert, he’s very fast, and he’s a duelist. His stats back up his unit bonuses, with 125 armor, 87 leadership, 94 speed, 79 melee attack, 72 melee defense, 470 weapon strength and a charge bonus of 90. He’s a serious force to be reckoned with, especially with his flaming sword strike and short range magic abilities.

Next up is Teclis, another hero Lord who is somewhat opposite of Tyrion. Teclis focuses mainly on his magic abilities and spellcasting. He has a very low armor rating of 15, high leadership at 90, low speed at 36, low melee attack and melee defense, and decent weapon strength at 280.

He’s obviously the lesser of the two twin Lords, falling drastically lower on the usefulness scale compared to Tyrion. Teclis has mid-ranged magic attacks such as chain lightning, debuffs against the enemies, and allied weapon and attack buffs, along with the Regrowth ability to heal your teammates. 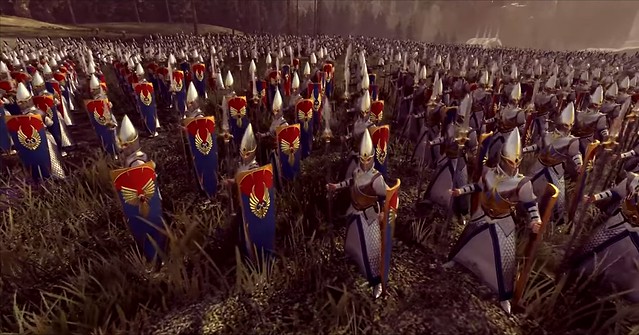 On the infantry side there are the High Elf Spearmen. They’re a basic class with light armor that are used to whittle down foes on the battlefield. They have shields to guard against melee attacks and light projectile fire, and also come in large enough numbers to become overbearing for unprepared armies. However, they have fairly low melee attack ratings, making them better for wearing down foes as opposed to killing them quickly.

Next up are the White Lions of Chrace, a great axe infantry class. They have a high armor rating of 90, high leadership at 75, moderate speed, and moderate weapon attack and defensive abilities. They’re a confident and dangerous unit due to having an armored bonus, and being able to pierce through the armor of enemies. They also gain a lion cloak bonus and a forest strider bonus, where they gain extra defensive bonuses against magic attacks.

Next up are the Swordmasters of Hoeth, a greatsword infantry class with some impressive unit bonuses that include being armored, having armor-piercing weapons, being anti-infantry, and being able to deflect shots. They have high armor, high leadership and decent attack and defensive properties. They’re excellent for quickly taking out lesser-armored units. 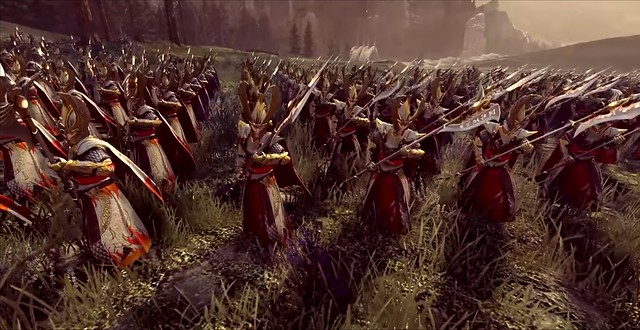 The Phoenix Guard are the most feared of the High Elf infantrymen due to the fact that they can see their own death, so they have no fear while on the battlefield. They have an extremely high armor rating of 100, very high leadership at 90, low speed, and above-decent melee attack and defensive ratings. Their bonuses are where they shine, where they have anti-large bonuses for taking down special units, they have armor-piercing weapons, and an armored bonus against incoming attacks. They also have a charge defense bonus against enemy units that charge you.

The Archers are up next. They’re a basic ranged unit with a “good range” bonus. They have super low armor and are glass figures on the battlefield, but they have decent leadership ratings at 60, and basically low stats everywhere else other than range. They only do a ranged attack of 20, but their range is set at 180, so they can definitely get off some volleys before repositioning. The Archers also have an alternate unit type with light armor that comes at a higher cost. They have slightly better melee defense and an armor rating of 40 instead of 15.

Moving on to the cavalry units in the High Elf army… we have the Ellyrian Reavers. They’re a “shock cavalry” unit with a very fast bonus and a vanguard deployment bonus. They have an armor rating of 40, with above average leadership and a high speed rating of 90. Their melee attack and defense is okay, but they get a charge bonus of 40.

The Silver Helms are another shock cavalry unit with an anti-infantry bonus and an armored bonus. Unlike the Ellyrian Reavers the Silver Helms have more than double the armor rating of 90, and a leadership rating of 80. Their speed is slightly lower at 78 due to being heavier, but they have higher melee attack, higher melee defense, and a charge bonus of 58.

Dragon Princes are up next. They’re yet another shock cavalry unit carrying armor and shield bonuses, along with a special dragon armor bonus to protect against fire damage, and martial masters ability. They have a super high armor rating of 110, along with a super-high leadership rating of 93, so they won’t be fleeing from battle anytime soon.

They have high speed at 78, average melee attack and defense ratings, but a super-high charge bonus of 80, so they’re great for ripping and tearing through the enemy line like the Doom Guy rips and tears through the guts of demons.

If you thought the vanilla Ellyrian Reavers were lame, well the Ellyrian Reaver Archers might change your mind. Their a highly mobile, highly proficient, missile cavalry unit. They have a very fast bonus, a vanguard deployment bonus so they can attack enemies from up close off the start of the battle, and they have a fire while moving bonus.

They have slightly below average armor at only 40, and mid-ranged leadership at 64, but their speed is unmatched at a 90, and their low melee attack and defense is offset with the fact that they can ride and fire at a range of up to 140. 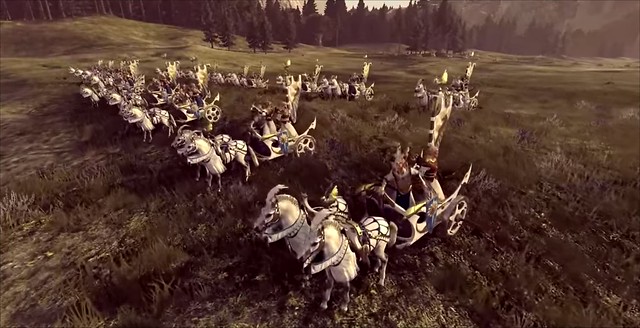 Up next are the Tiranoe Chariot units. They’re a missile chariot class with a reaver bow bonus, an anti-infantry bonus, and a fire while moving bonus. They have perfectly good armor at 50, a high enough leadership rating of 75, and very fast speed at 84.

Their weapon strength is actually at 40 despite their melee attack and melee defense being rather low. They have a charge bonus of 55 and this is coupled with a high range of 165, missile damage of 124, and 46 ammunition.

However, you’ll have to make the shots count because you only get 22 shots. The good part is that you get a range of 370 on these bad boys and 139 missile damage output. The speed is only 20 so you won’t be doing any hit and run attacks with these bad boys. 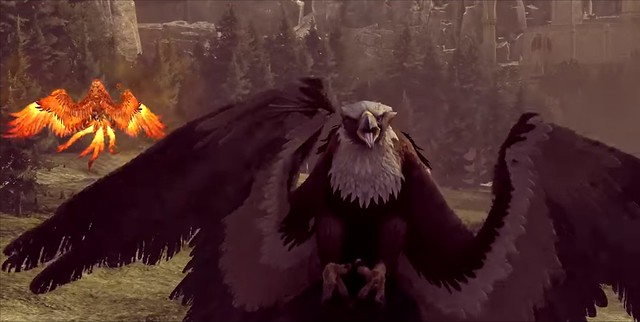 Rounding out the unit types are the monstrous beasts on the side of the High Elves. This includes the Great Eagle, which has a bonus of being very fast. It has an armor rating of 30, very poor leadership at only 19, but it’s extremely fast with a rating of 119. It also has moderate melee attack damage at 40, but low melee defense at only 28. It’s greatest strength are its talons, doing up to 390 damage, along with charging in against enemies with a 62 charge bonus.

The Flamespyre Phoenix are another aerial unit, low in armor but have the bonus ability for rebirth, along with having armor piercing bonuses, being able to instantly kill units with the death from above fire attack, and they’re attuned to magic. They have a charge bonus of 50, a leadership rating of 50, extremely high speed at 120, and their weapon strength is at 330. The rebirth bonus also allows it to regain some HP when its life gets too low during combat.

The Frostheart Phoenix is the next aerial unit on the itinerary, sporting an armored bonus, armor-piercing attacks, a magical aura and an affability toward magic. Unlike its fellow aerial brethren, the Frostheart Phoenix is not lightly armored or weak against melee attacks, it actually has an armor rating of 80, and a high leadership rating of 85. Its speed is set at 100, and its weapon strength is set to 360.

Joining the eagles are three different types of dragons, including the Sun Dragon, which has bonuses to use sun dragon’s breath. It causes terror amongst its foes, has scaly skin to resist against most attacks, and pierces the armor of enemy units. It’s actual armor rating isn’t too impressive, nestling in at a mediocre 50, while its leadership is at 70, and its speed is 95. Its weapon strength is quite power at 460, making it stronger than the eagles.

The Moon Dragon also has the same bonuses as the Sun Dragon, but instead of fire breath it has moon dragon’s breath. It also has higher weapon strength at 520.

Last but not least is the Star Dragon, rocking star dragon’s breath, and having very high armor at an 80 rating, along with high leadership at 80, a speed rating of 80, and both above-average melee attack and defensive abilities. Its breath is its most dangerous tool, however, being able unleash massive damage with a rating of 580.