Yggdrazil Group’s Home Sweet Home is a walking sim horror game. It’s themed around Thai mythology, and puts players in a role where investigating the environment and solving puzzles are key to progressing through the stages. If you’ve been having difficulty solving some of the puzzles or navigating through the environment, a walkthrough is available to help you out.

YouTuber RabidRestrospecGames has a full playthrough of Home Sweet Home, which clocks in at nearly three full hours. You can check it out below.

After a brief dialogue exchange, the game puts you in a n abandoned building. Press ‘Tab’ to open up your notebook and check for your objectives. Press ‘E’ to interact with objects, and press ‘C’ to crouch down under objects. Press ‘Shift’ to run.

Walk through the hall and check the shelf in the room where the radio is located. There’s a key for room
7640. Take it.

The game will encourage you to follow a girl and ask her for help to get out of the building. Follow the stairwell to the bottom floor.

Follow the girl into the room where she’ll turn around and chase you. Head out into the hallway and to the door on your left and hide in the locker until she leaves.

Proceed through the room where she used to be and go to your right and pull up the string with the pincers in them. Go back and use the pincers on the lock to get through the caged door. Keep an eye out for blood puddles on the wall and floor – the ghost girl can teleport from the puddles.

Leave the room and go to the very end of the hallway. There’s an air vent blocked by planks. Use the crowbar on the planks to enter into the vent and continue through the vent access until you reach a hole in the wall that leads you into a room where you can examine the two dolls and the Lechery Jinx spell.

Exit the room and go into the hallway. A ghastly figure will walk down the hallway – quickly go and hide in the nearby locker to avoid her gaze.

Travel to the end of the hall and press the button to raise the gate. The gate will get stuck after the fuse in the power box blows out. The ghost girl will come out of the blood portal so you’ll need to go hide in the locker.

Wait for her to go into the library and she’ll begin to slowly walk down each isle. Head down each isle and keep at her back so she doesn’t see you. Travel to the opposite end of the room where there’s a door just past the reading table. The door will lead you to several lockers and a desk where a fuse is on the table. Take the fuse. 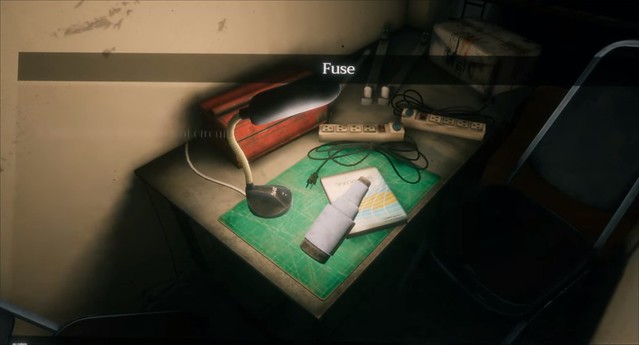 Sneak back through the library and put the new fuse into the power box and press the power button for the gate to crawl underneath it.

In the next room, examine the rolled metal amulet.

Press the button on the door.

The ghost chick will come out of the wall and begin to chase you. Crawl under the door and run through the hall to get away from the ghost girl – avoid the puddles of blood, otherwise it will slow you down and the ghost girl will start stabbing you like one of Usher’s ex-mistresses after they found out he gave them an STD.

When you wake up from the dream and end up in Tim’s house, go over to the book shelf on the first floor and there’s a spare key ring that will allow you to enter into Jane’s room.

Go back downstairs and a panel access that leads under the stairs will be open. Go inside.

Follow the vent to the left and exit through the hole in the wall.

The chalk corresponds to the numbers for the lock holding the latch tight for the hatch on the floor. The sequence for the lock is: 378

Go down into the under part of the house and into the next area and read the newspaper clipping and listen to the radio report.

A radio will play, revealing the science of karma and how anything bad you do will come back to bite you hard in the butt cheeks like a bear trap on a drunk hunter wandering around at night.

Proceed through the building until you enter into a room where a giant monster will peer through the window… quickly hide behind the boxes to avoid being grabbed and gobbled up. When the red light from his eyes fade away, sneak around into the next hallway.

Proceed to the roof and wait for the red-eyed monster to look away and then sneak and hide behind each of the objects on the roof. Wait for him to walk to the next segment and then rinse and repeat until you get back inside the building.

When you reach the police station’s office area, go up to the next floor and inside a small room you’ll find a green-handled screwdriver on the desk. Take it.

Head back down and into one of the other rooms and there will be a vent you can unscrew that will lead you into a bathroom. There’s a dirty black monster inside.

Walking sim your way into the office area and you’ll find a hint at the bottom of one of the desks in front of the safe. There are three sets of numbers: 01 06 09

Inside you’ll find a police station key for 3f.

Head up to the third floor and use the key on the door to access the next set of rooms. You’ll see Jane running down the hall in the distance.

Go into the office on the left and read Jane’s diary. You can also examine the police reports and diagrams regarding the motorcycle gang.

Listen to the news report about the gang member dying in the crash and then head up to the next floor. Press the crane switch located at the construction site on the upper floor and it will lower the hook. Go down to the next level and hook up the box. Proceed back upstairs and flip the switch to raise the box so the door below is no longer blocked.

Proceed through the door and you’ll have to stealth your way past the giant monster.

Head through the crates and avoid being smashed by the giant monster hand. Follow Jane back into the wooden cabin area.

During the Preta sequence you’ll have to take a book of matches, slowly crawl under the tables and take a piece of bread, and then move into the next room to grab the incense. There’s also a screwdriver on the floor; take it.

Use the screwdriver to pry open the panel to get back into the offering room. Sneak back toward the altar and give the offering to the Preta to satiate it.

Follow the path and read Jane’s diary notes along the way.

There’s a panel at the far end of the room that will lead you back to Tim’s home. However, Tim will have to travel back into the danger zone in order to rescue his wife, Jane.