15083281cookie-checkBatman: The Enemy Within Season 2 – Episode 2 Walkthrough And Choicesno
Media

Batman: The Enemy Within Season 2 – Episode 2 Walkthrough And Choices

YouTuber RabidRetrospectGames rolled out a three hour video covering alternate playthroughs of the episode from start to finish. You can check it out below.

During the opening, Batman will talk to Waller, and you can choose to say you don’t trust her, that she’s not to blame, or to request she reinstate Jim Gordon to his position.

After the conversation Batman will attempt to stop some thugs breaking into the GCPD arsenal. You’ll need to perform the quick-time events during the fight scenes. During the fight with Bane you’ll lose no matter what but you can choose how you attack Bane.

You can choose to either call Gordon or Waller for help. Waller already knows Batman’s identity, so he doesn’t lose anything.

If you call Gordon and let him know that you always have his back, he’ll remember that and the relationship between Batman and Gordon. If Blake didn’t die in Episode 1, he will warn Batman that he should stay on Waller’s good side, assuming you didn’t call her to help you.

You can reassure Alfred back at the Batcave, and then proceed to review the crimes committed throughout Gotham.

You can view the media feeds surrounding each of the events.

Once you get done checking the feeds Alfred will suggest meeting with John Doe in order to get in and infiltrate the gang.

If you put a tracker on the Joker in the previous episode you’ll be able to track him to a bar.

However, if you put the tracker on the Joker he will find it and call you out on it. You can apologize to repair his sense of betrayed trust.

Joker will ask why Bruce had a change of heart and then pinky swear that they won’t keep any more secrets between them. You can either choose to pinky swear or refuse – if you refuse it will damage your relationship with the Joker. 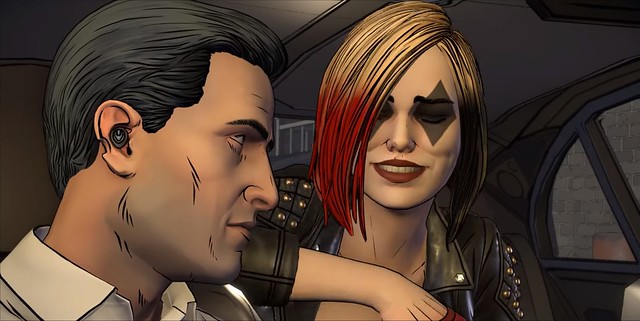 Harley will question Bruce about why he wants to join the Pact and why he teamed up with the Joker. Whatever Bruce tells Harley she will repeat it to the Joker.

Harley will also test Bruce by requiring him to grab the Phalanx Key from the Wayne Enterprise tower.

In the elevator ride up to the office, Regina will step into the elevator and get confronted by Harley. You can either choose to step in and prevent Harley from terrorizing Regina or you can let Harley antagonize Bruce’s employee. Whatever you do don’t tell Regina that Harley and Joker are “Business Partners” because she won’t buy it.

Inside the lab you’ll need to scan for Lucius’ fingerprints. You can get partial fingerprints from Tiffany’s art class decoration, the picture on the desk, the keypad at the computer, and the EMP generator.

When you encounter Tiffany in the vault, you can either lie about Lucius or tell her the truth that he was working with the Batman (without giving away Bruce’s identity).

The Joker will confront Bruce and Tiffany about the Phalanx Key. You can either force Tiffany to hand over the key or she will end up getting caught by Harley.

Alternatively, if Harley catches Tiffany Bruce will be forced to either announce his allegiance to Harley or say he’s “nothing like” them. If Bruce aligns with Harley and Joker then Harley will kiss Bruce on the cheek and make The Joker jealous. This will also greatly damage Tiffany’s relationship with Bruce. 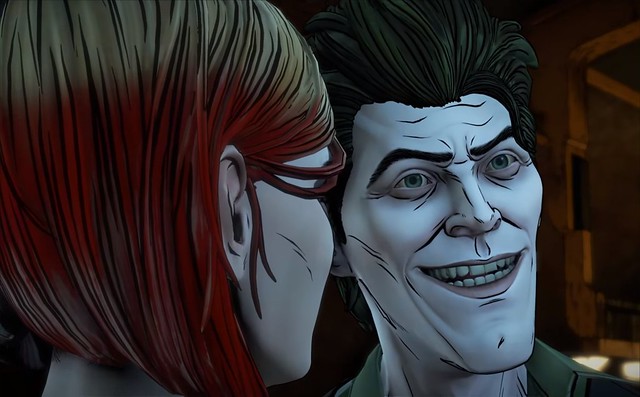 On the rooftop when Waller confronts Gordon and Batman, you can choose to either take Waller or Gordon’s side. Gordon will ask if Waller has leverage on Batman: you can either tell him not to get involved or tell him the truth and let Gordon know that Waller knows Batman’s identity.

During the EMP puzzle you’ll need to match up the on and off switches with the schematics in the right upper hand corner.

You can use the guide below to turn on and off the switches to turn the EMP off.

In the office with Harley, you’ll be able to ask about Bane and Freeze. She’ll let you know what you’ll need to do to convince the other two to let Bruce onto the team.

Bane only respects strength and loyalty. Freeze only cares about Nora, his wife.

Talk to Victor about his wife – let him know that Bruce can help cure Nora.

Victor will remember that decision and show Bruce respect.

Go talk to Bane; he will want a beer.

Go into the room with the Joker and talk to him. Once you get done talking to the Joker look at the Prisca box to get the beer and then go back and talk to Bane after getting a bottle.

When you talk to Bane he will ask you why you joined them – if you tell him you want revenge against The Agency he will be lenient. However, you will have to fight a former henchman of Bane – if you’re brutal to him then Bane will respect Bruce’s power. If you’re merciful then Bane will think Bruce is weak.

You will need at least two of the others to say “In” to be a part of the Pact.

When you’re part of the heist, you can either be violent with Waller’s agents or tell them to stand down. You can also choose to either head off Harley and prevent her from crushing an Agent’s head or head off Bane to stop him from killing the agents.

Once the crew gets back to the hideout it turns out that the case contains the body of the Riddler. The episode ends with Catwoman hopping down and telling them that she has what they need for the right price.

You can see an alternate playthrough containing completely different choices courtesy of MKIceandFire where they offer players a look at some of the more fringe choices and outcomes inTelltale’s Batman: The Enemy Within Season 2 Episode 2: The Pact. You can check it out below.