The story mode for Tekken 7 is a departure from the typical fighting game story. It involves a mixture of different styles of storytelling, all infused with some fighting game fanfare. The game is out for PC, Xbox One and PS4 and you can get an idea of what the story mode is like with the walkthrough.

The game starts with a journalist explaining his investigation into the Mishima family, starting with Kazuya and Heihachi. Players will have an opportunity to play as Kazuya as he fights Heihachi for the very first time. Heihachi will only pull off a few moves and players will have to attempt to whittle down Heihachi’s life. You will end up losing, as showcased in the video by MKIceandFire.

The story mode will assist players through the campaign. The next playable segment involves fighting a series of soldiers on an elevator in a sequential tag-style fight. They’ll teach you some basic combos while you fight the soldiers. Once you’re finished another cinematic will play.

As Heihachi, you’ll need to fight against Nina. Watch out for her Rage attacks.

Once she’s defeated Heihachi will resume control of the Mishima Zaibatsu and will reinstate the King of Iron Fist Tournament.

The game will flashback to the journalist, who receives information about his hometown being destroyed. He originally was unsure if it was G Corporation or the Mishima Zaibatsu. In the flashback we see that the G Corporation had sent a series of Jack-4 units in to kill both Heihachi and Kazuya during The King of Iron Fist Tournament 4 in Tekken 4. This was before Kazuya took control of G Corp.

You’ll have to take control of both Heihachi and Kazuya during this fight against Jack-4 units. Each of the rounds will start with the Jack units getting an automatic attack, so be sure to block when you start, or move back to avoid being clobbered to the ground. Once the segment involving the Jack units are complete, the journalist will recount how Kazuya had the former executives of G Corporation assassinated and eventually resumed control from the shadows.

Nina and Heihachi will make their way to Italy to find the exorcist, Claudio.

You’ll play as Heihachi, and must defeat Claudio in a one-on-one fight. The first round will be normal but the second round will see Claudio activating his Rage. Be sure to watch out for his attacks. They are lateral attacks that move in a straight line; dodge left or right to get out of the way of his special attacks.

Once defeated Heihachi will explain that he needs Claudio’s help in exorcising Kazuya of the devil. He mentions that he, Heihachi, is a human with the power of a devil. Kazuya, however, he mentions is a devil in the form of a human.

The journalist then recounts the history of the Mishima family, how Jinpachi devoted the family to martial arts, but when Heihachi took control he turned the Mishima establishment into a military corporation.

When Jin defeated Heihachi and took back control of the Zaibatsu, he waged war on G Corporation, leading to the current predicament where the three generations of Mishimas are fighting for control of the world.

Back at the main base, Heihachi has plans to retrieve Jin and exorcise his devil as well, with the help of Claudio.

The game switches over to Jin, who has been found unconscious in a desert in the middle east after defeating the demon Azazel. However, as the military attempt to retrieve him, he unleashes his devil powers and crashes the helicopter. He wanders into a mid-east town where more soldiers attempt to capture him. However, Lars has been tracking him and manages to defeat the soldiers and capture Jin for himself.

You’ll need to play as Lars in this segment, shooting down the enemies and dodging their attacks. You can also put the gun away and fight them head-on. The journalist then mentions how he met Lee Chaolan, which then switches to Lee waking up Alisa, Dr. Boskonovitch’s cyborg. Alisa and Lee will fight. As Lee you shouldn’t have problems during the first round against Alisa. Just focus on his kick combos and keep Alisa cornered. During the second round she may prove to be a bit more difficult, so don’t be afraid to use your Rage and keep your distance when she uses her chainsaw fists.

The game then switches back to the journalist and his interactions with Lee. It’s explained that Lee is the owner of Violet Systems, and that he’s the adopted son of Heihachi, and that he shared a rivalry with Kazuya.

You’ll then play as Alisa, as Lee explains in his flashback their attempt to reunite Alisa with Lars. Before the two can be reunited you’ll have to fight through the Tekken Force soldiers from the Tekken Force mode. They’re pretty easy to defeat and will barely fight back save for a few counter-hits and a few punches here and there.

You’re not done, though! As Lee you’ll need to fight through some of the Tekken Force as well. They’ll block a lot more with Lee, so mix up your neutral game from high to low and low to high. If they keep blocking, go for a lift move to start an air-juggle, usually by using forward-to-up Triangle.

The journalist finally happens upon an old man in a village who explains that Hachijo’s bloodline is cursed with the devil’s blood, and it was passed on to Kazuya.

The game then switches back to Heihachi who is meditating in a temple when he’s interrupted by Akuma. You can play as Akuma, who shares many of his same moveset from the Street Fighter series. Defeat Heihachi, and then you’ll play as Heihachi against Jack-6 units. Defeat the Jack units and then another short cinematic will play revealing that Kazumi tasked Akuma with killing both Kazuya and Heihachi; a promise that Akuma said he would fulfill when both of them were strong enough and worthy enough to be defeated by his fists.

The game switches back to Lee, who takes Alisa to visit Lars. Lars has Jin in a recovery room, but they’re interrupted when Nina and the Tekken Force raid the facility. You’ll play as Alisa in a couple of rounds against Nina. She’s no pushover, so focus on low attacks that can lead into juggles, otherwise she’ll block almost all your neutrals.

While Nina attempts to recover Jin, Lee has a backup plan and blows up the facility while escaping with Jin.

The journalist is then told about Lars… who is the illegitimate son of Heihachi. Lars, however, formed a rebel army to fight against G Corporation and the Mishima Zaibatsu.

Lars explains that he plans to use Jin’s powers to put an end to all the fighting.

Heihachi, meanwhile fakes his death and tells the world he is dead.

He has a plan to broadcast to the world the fight involving Kazuya and Akuma, hoping to expose Kazuya’s devil form to the world.

Akuma heads to the G Corp headquarters to fight Kazuya, and Kazuya invites him to the roof where they plan to fight to the death. There Akuma reveals to Kazuya that his mother saved his life and that to repay his debt he must kill Kazuya and Heihachi. 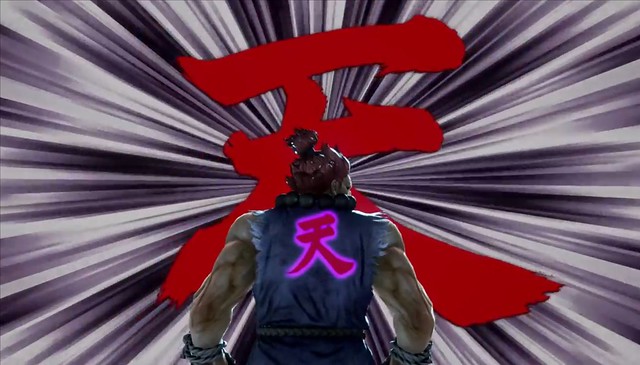 Once the fight finishes another cinematic will play where the world is led to believe that the Mishima Zaibatsu destroyed Kazuya and public opinion begins to tumble for the G Corporation after it’s revealed that Kazuya is a devil.

Kazuya, however, didn’t die from the satellite blast and uses his laser eyes to destroy Heihachi’s satellite.

The satellite being blown up was blamed on the Zaibatsu, leading to Mishima’s conglomerate losing public opinion after the satellite crashed into a town, killing many in the process.

The journalist attempts to blackmail the Zaibatsu, and Heihachi agrees to meet with him.

Heihachi tells the journalist that he will tell him everything if he agrees to tell the world everything he tells him.

Heihachi recounts how Kazumi and been a trainee under his father Jinpachi. How Kazumi and he had trained together and eventually fell in love and had a child, Kazuya. However, Heihachi reveals that one day Kazumi tried to kill him and revealed that the Hachijo bloodline had always sought to destroy those such as the Mishiumas.

Kazumi married into the Mishima family in hopes of destroying them from the inside out.

During their fight, however, Heihachi was forced to kill Kazumi after she turned into her demon form.

Heihachi explains to the journalist that after Kazumi tried to kill him, he attempted to test if Kazuya was also a demon by dropping him off a cliff. Heihachi was proven correct and realized that Kazuya was a demon. He lamented not having killed Kazuya when he had the chance.

This eventually leads Heihachi and Kazuya to face off one more time in the pits of a river of fire. You’ll need to fight off Kazuya several times as Heihachi in an epic showdown.

After Kazuya and Heihachi fight, Kazuya finally manages best him and kills him with a final blow to the heart. He then dumps Heihachi’s body into the river of fire.

In the epilogue the journalist recounts how it all seemed unfathomable that he lost everything in war not between humans, but between demons and devils.

In a post-credit scene Lars, Alisa and Lee are on a rooftop recognizing that the war still hasn’t ended even with Heihachi finally dead.

Lars says that it’s finally up to Jin to restore peace, and Jin vows to use his devil powers to finally wrest control of G Corp from Kazuya and kill him for good.

In an after-after credit scene, we see that Akuma has tracked down Kazuya to the volcano island, and fights him one more time. Except this time Kazuya transforms into Devil to fight Akuma, and nearly beats him. But Akuma powers up and the two shoot fireballs and lasers at each other, resulting in the whole island exploding.

TL; DR: Heihachi married a childhood sweetheart Kazumi. They had a son, Kazuya. Kazumi tried to kill Heihachi because it was part of her devil bloodline (identical to Iori Yagami and Kyo Kusanagi’s rivalry). Heihachi kills his wife instead, and throws his son off a cliff because Kazuya carries Kazumi’s blood. However, Kazuya doesn’t die and instead comes back to get revenge. This blood-feud carries on for years. Akuma, who was saved by Kazumi at one point in his life, is indebted to her to carry out the task of killing Heihachi and Kazuya. He nearly manages to do so but is interrupted by a satellite blast. Heihaichi and Kazuya finally meet one final time to fight in a volcano, and Kazuya kills Heihachi once and for all. In the post-credit scene Jin Kazama, Kazuya’s son, vows to kill his father to end the war for good.