Arkane Studios’ sci-fi horror-shooter, Prey, for the PC, PS4 and Xbox One may not share much of anything in common with the 2006 Prey from years ago, but it does have its own unique story that unravels in a somewhat non-linear way. For gamers who need a quick synopsis of the ending and an explanation of what happens, this article will attempt to explain things.

Prey starts with Morgan Yu waking up in an apartment and taking a helicopter ride to TranStar to meet their brother Alex Yu, the head of the company. The reality is that Morgan is actually in a simulation on a space station called the Talos I, being used in a series of experiments and tests.

During one of the experiments a black goo monster called a Mimic transforms into a coffee mug and kills one of the doctors administering the test to Morgan. The Mimic is part of an alien race known as the Typhon.

Morgan blacks out and then reawakens in the simulation apartment, only this time a bunch of the staff working at the TranStar station are dead – frozen in place with their faces frozen in sheer terror. An AI operator known as January informs Morgan to head to their office on the Talos I station and watch a video that was pre-corded. On the way to the office, Morgan discovers that the Typhon aliens have spread throughout the Talos I space station and have been killing lots of the crew.

Morgan sneaks toward their office and plays the video that January suggested. The video is actually from Morgan. It was prerecorded before the latest incident took place and the Typhon got loose on the station. The video reveals that Morgan has been subjected to multiple tests using experimental Neuromods, which can alter the neurophysical makeup of the human mind. The experiments were designed to allow Morgan to tap into and utilize some of the powers of the Typhon. However, every time a Neuromod is installed or reinstalled, Morgan would lose their memory.

As a failsafe, Morgan made a video warning their own self about the dangers of the experimental Neuromods and the Typhon aliens, who are explained as not having any empathy, thought processes or any way to communicate. Their only goal is to assimilate and destroy.

Morgan’s plan – before having their memory wiped – was to steal the two keys necessary to activate the self-destruct process on the Talos I and blow up everyone and everything on the space station, in hopes of ensuring that the Typhon aliens never reach Earth. During the exploration of the station for the two arming keys, it’s discovered that Alex and Morgan both kept tabs on the other crew members of Talos I. Morgan, however, had to keep recordings of the crew due to the constant memory loss. Alex also briefly had a relationship with one of the crew, Mikhaila Ilyushin. Morgan ended the relationship with Mikhaila after suffering from the memory loss due to the tests with the Neuromods and the Typhon.

Morgan ended making the backup plan to destroy Talos I after nearly having a mental breakdown during a therapy session with Dr. Mathias Kohl, where Morgan became unhinged due to all the memory loss. Morgan began secretly stashing parts to build January, the AI robot to help put the plan into motion to destroy the station.

Alex, however, manages to get a hold of the second arming key for the self-destruct sequence, and forces Morgan to come talk to him first. Along the way Morgan has the option to help some of the surviving crew members escape from Talos I, or attempt to kill as many Typhon as possible before meeting up with Alex.

After finally catching up with their brother, Alex explains that there’s a way to stop all the Typhon without destroying the entire space station by using a Nullwave modifier to destroy all of the Typhon who are attached to a neural network known as the Coral.

During this time a giant Typhon attacks Talos I, engulfing the entire station by ripping through the hull. Some of the surviving crew, Alex and January all argue with Morgan on whether to destroy Talos I or use the Nullwave neuromod on the Coral to destroy the Typhon. January encourages Morgan to self-destruct the station and die along with the station. Some of the crew want Morgan to destroy the station and evacuate with them. Alex and some of the other crew want Morgan to infect the Coral with the Nullifier and evacuate from Talos I. 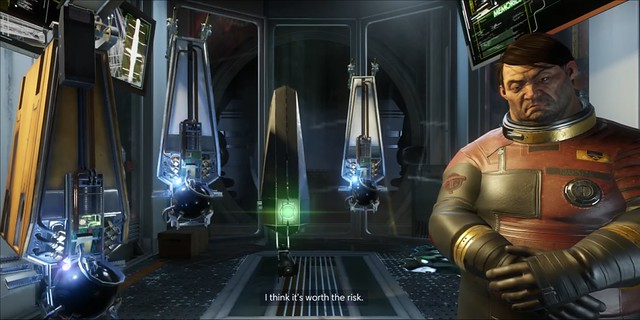 Depending on the choices you make depends on the ending you get. It turns out that Alex survives and he reveals that the player-character is actually a Mimic and was imbued with Morgan’s memories. The entire game was actually a reconstructed simulator based on the memories of the real Morgan, similar to The Matrix. The reason for this is because Earth has been taken over by the Typhon, and instead of trying to give humans the Typhon’s powers, they instead try to imbue humanity into the Mimics, which was part of the whole point of the Talos I experiments.

If players utilize empathy and save as many humans as possible throughout the game, the evaluation at the end will include comments from each of the people that Morgan can save and they will tell Alex to preserve the Mimic, especially if players chose not to upgrade with a bunch of Typhon mods. Alex will give the Mimic an opportunity to take his hand or kill them all. If players take Alex’s hand it will promise a brighter future where Mimics and humanity can live peacefully with one another. If players decide to kill the remaining survivors they encounter, fail show empathy, and ultimately either attempt to kill Alex, or trigger the self-destruct of Talos I and escape from one of the escape pods, the game will end with Morgan escaping from the pod while Talos I blows up.

Alternatively, if players stock up on Typhon Neuromods and attempt to escape on the shuttle with the other survivors, they will receive a negative evaluation from the surviving crew.

It’s also possible to find the launch key to one of the escape pods and escape from the Talos I station without initiating the self-destruct sequence or applying the nullifying effect on the Typhon. This will, however, result in one of the more abrupt and unsatisfying endings, where the simulation will cut off due to Alex ending the program, and you hear a voiceover of him saying “We failed. This isn’t the one.”

TL;DR: The entire game is just a simulation of Morgan Yu’s memories. Players are actually in control of a Mimic who relives Morgan’s memories as part of a test evaluation by Alex Yu. The test is to see if the Typhon alien species can be imbued with human empathy and sensibilities as a way to combat against the Typhon, who have already begun to take over Earth. The Typhon have no neuro cognitive abilities of their own, and they simply devour, assimilate and destroy, hence the reason why Alex uses the experiments as a way to impart some sense of humanity into one of the Mimics they captured.

Depending on the choices players make throughout the game, and the upgrades they choose to apply, will determine if they get one of the good endings or one of the bad endings.