Tasier Studios’ Little Nightmares has become quite the talk of the gaming community town due to its striking visuals and compelling, albeit ambiguous story. Well, some people have put together theories and thoughts as to what happened leading up to the events of the game, as well as putting together the pieces that tie up the loose ends. This article will attempt to explain the ending for Little Nightmares, which stars a nine-year-old girl in a little yellow raincoat.

The game starts with Six in a room on a ship called The Maw. Six begins her journey toward escape by moving through the lower decks. Meanwhile, small gnomes scurry about attempting to hide from the various grotesque, monster-esque fiends roaming the ship.

Six first escapes from the prison located in the bowels of the ship where black sludge-like creatures reside. The sludge attempts, on occasion, to strangle her, but she manages to get free from their confines. She later encounters a long-armed janitor who gives pursuit, after she manages to escape from a series of watchful eye security systems, which incinerates those who stay under its gaze for too long. Six also finds out that there are kids being kept in cages. Some kids also stay in rooms, have toys to play with, and are fed – one such child even manages to feed Six while she suffers from hunger sickness.

Based on the drawings in the children rooms, it appears as if some of the children were taken from their homes and families, and forced to stay aboard the ship under the threat of being vaporized by the watchful eye.

The long-armed janitor eventually captures Six and locks her in a cage. She manages to escape and face off against the janitor during a daring chase that ends up in a room where a large metal door won’t fully close due to a brittle crate being in the way. While the janitor attempts to use his arms to capture Six again, Six brazenly pulls apart the remains of the crate, causing all the pressure of the door to slam shut, severing both arms of the janitor.

Six eventually finds loads of wrapped meat being moved through a kitchen area, where she encounters the butcher chefs, two obese creatures who wear wrinkly skin-masks to cover up their hideous features underneath. The two attempt to capture her and stuff her into the food and cook it for the passengers aboard the Maw.

The butchers are outwitted and outmaneuvered by the little girl in the yellow raincoat, who eventually makes her way up to the upper decks of the ship, where she spots a line of passengers boarding. 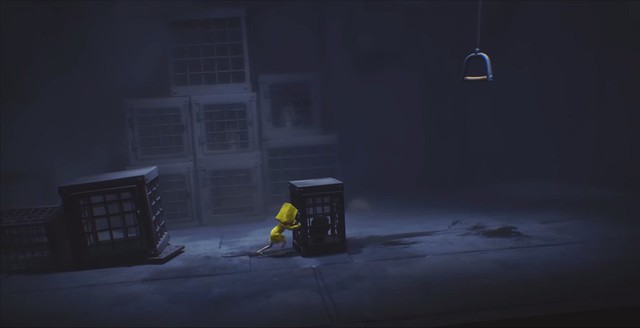 She witnesses that there’s a buffet of gluttony taking place with the hideously deformed passengers – all of whom are being ushered on board by a mysterious maiden.

With no remorse for her deeds, and a head set on escaping the Maw, Six takes a daring dash through the dining hall, which is playing host to the resident gluttons. The food that they are devouring is certainly not enough, and they set their sights on the little girl in the yellow raincoat, scraping, clawing and crawling after her with desperate resolve to consume her along with all the other food set before them.

Six, however, is agile enough to avoid a literal avalanche of grotesque bodies determined to eat her – she slips through the dining hall’s cracks and manages to make her way toward the quarters of the mysterious Lady.

However, Six succumbs to her hunger sickness again, and after upgrading from bread to a rat, she then is offered a piece of sausage from one of the gnomes aboard the ship, who have been watching her as she has been escaping from the watchful eye, the janitor and the butcher twins. However… Six forgoes the gnome’s offer for the sausage, and instead eats the gnome.

It’s also later revealed that the gnome that Six consumers is actually the little boy she encountered while captured in the cages. The little boy had managed to escape the cage and had an unfortunate run-in with the Lady, who promptly used her dark magic to turn him into a gnome. The boy wandered into the kitchen where he eventually met his unkindly fate at the hands of Six. 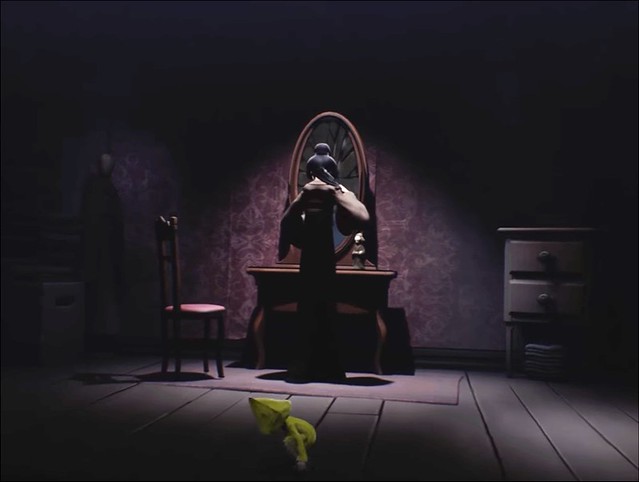 The mysterious Lady prides herself on beauty, but has no mirrors.

The Lady also has the ability to drain life with the power of the shadows.

Six uses this to her advantage, scavenging for a small mirror and staying in the light. Six eventually uses the mirror to make the Lady see her own reflection, and it causes her to become weakened and powerless.

In her state of defeat, the Lady lay motionless; Six is hungry.

As one final act to cure her sickness, Six devours the Lady, and with her, her powers.

As a final act of defiance against the prison that was the Maw, Six walks the dining hall leading toward outside… with every stride she uses the power of the shadows to usurp the life from the gluttonous passengers.

As the towering chunks of fleshy meat-suits drop dead at the feet of Six, she embraces her powers as she heads up the steps into the sunlight beyond the door of the watchful eye.

Six’s ascension catches the curiosity of the remaining gnomes, who carefully, cautiously watch from afar.

In an ending scene after the credits finish, Six can be seen on a small island at a lighthouse where the symbol of the watchful eye can be seen on the structure.

Despite the horrors Six encountered aboard the Maw, her unfettered acts of violence and insatiable hunger eventually led her to become a little nightmare.

TL;DR: A little person in a yellow raincoat named Six is captured and locked away at the bottom of a giant boat. Six escapes and manages to thwart the plans of the staff who attempt to capture, kill, or eat her. Along the way Six suffers from a hunger sickness, and it grows worse and worse the further toward the top of the boat she gets. She satiates the sickness with food at first, but the sickness grows and she eventually begins to devour other animals, creatures and eventually human-sized beings. After encountering a powerful specter known as the Lady, Six manages to defeat her, eat her, and absorb her power. She uses this power to kill gluttonous, monster-like passengers aboard the Maw before escaping.

Some people believe that Six was originally a cleaner aboard the ship, but her hunger sickness ended up getting her thrown into the prison-like stern. There are also theories that the children being taken and kept aboard the ship are also used as food for the gluttonous creatures. As an act of revenge, Six not only escapes but carries out various forms of retribution against her captors, eventually resulting in her defeating the head mistress of the ship, known as the Lady, and stealing her powers.