The classic point-and-click game from Double Fine Productions, Full Throttle: Remastered, has found its way onto the marketplace for new-school gamers playing on PC, PS4 and Xbox One. The title was one of the defining games from the 1990s and one of the most original point-and-click games ever made. That’s not to mention it featured one of the most iconic badasses with one of the coolest bikes in entertainment media next to Kaneda’s motorcycle. For gamers looking for a gameplay walkthrough of Full Throttle: Remastered, there’s one right here.

YouTuber RabidRetrospectGames has a complete gameplay playthrough with a playlist consisting of just three videos. You can check out the full playlist below.

The cinematic plays leading up to Ben being thrown into a trash can. You’ll need to punch the far right lid off to get out.

You’ll need to get on the bike to leave, but Ben will have lost his keys. You’ll need to kick the door in to the bar and go inside to find Ben’s keys.

Take the keys and use them on the bike to cue the next cinematic sequence.

You’ll end up in a Road Rash style fight sequence and you’ll need to beat the living snot out of them to proceed.

An epic cinematic will play with Ben’s bike getting trashed, which brings back memories of just how badass this game really was. It’s such a shame we don’t get games and characters like this anymore.

Talk to Mo’ and she’ll require you to find:
Forks
A wielding torch
And gas

Take the hose and the empty can from inside Mo’s shack.

Talk to the scumbag journalist and then head to the trailer park.

Knock on the door repeatedly and when the guy comes upstairs kick the door in to knock him out. You’ll find the welding torch in his basement. Take it.

Hide behind the tank on the side of the tower.

Head over to the hover sled and use the hose on the sled. Use the gas can under the hose. Use Ben’s mouth on the hose and siphon the gas out of the sled.

Head to the parts pile and grab the front forks.

Head back to Maureen’s place and check out the photo with Maureen and her uncle. Then leave the town and Ben will head back to the bar.

Exit the bar and go to the dumpster. Talk to Miranda in the dumpster and get one of the fake IDs.

Head back inside the bar and talk to the man with the knife. Show the trucker the fake ID and he’ll hitch you a ride to the ranch.

Once the trucker ditches Ben you’ll need to find a fuel line.

Another super badass cinematic will play.

Ben will stop at the crashed semi. Take some of the fertilizer and use the tire iron to un bolt the wheels on the semi. Kick the semi trailer over.

Drive back in the opposite direction toward the ranch.

Get Ripburger’s goons to chase you back to toward the fertilizer trailer and they’ll crash.

Read the picture about the gorge, the ramp and the booster.

You’ll need to drive back toward Mine Road and talk to Father Torque. Find out about the Cavefish and find out that the Ricky Myran ramp is in the Cavefish hideout. The only way you can get into the cave is to get your hands on the Cavefish goggles, so you’ll need to defeat one in the Road Rash style battle.

Defeat all of the bikers on Mine Road. You can use the tire iron to beat the crap out of all the bikers. Every biker you defeat using a different weapon will automatically be added to Ben’s stash. You’ll need the chain to beat up the guy with the destroyer class turbo boost and Ben will take his fuel injector.

After you defeat all of the main baddies, you can then fight the Cavefish. Use the 2×4 to quickly knock him off the bike and then equip the goggles so you can see the secret entrance to their hideout. 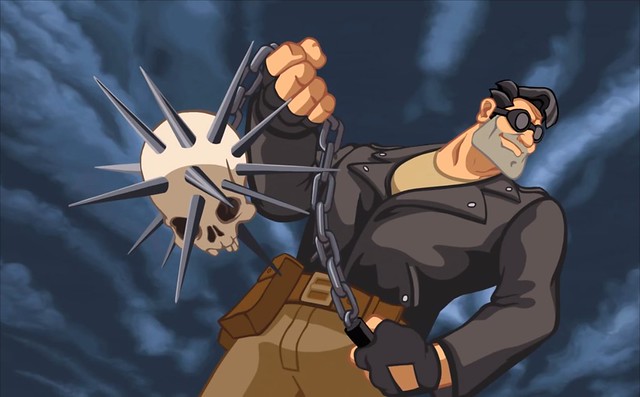 While wearing the goggles, wait for the audio beep to chime in and look at the bottom of the screen. A small text notice will flash “Cave”… wait for it to appear and then tap the button to enter the cave. Timing is everything.

Once inside the cave grab the ramp and attach it to your bike, but DO NOT EXIT THE CAVE.

Instead, get off the bike and use the ramp to remove the ground markers so that the Cavefish drive off the cliff and die.

When Ben exits the cave and sets up the ramp head back down the road to the crashed blue car and when the words “Stop” flash on the screen, press the “Take Exit” button.

Use the tire iron on the blue hover car. Take the auto hover and attach it to Ben’s bike.

Drive to the end of the road and click the yellow forward button on the ramp to have Ben make the jump across the gorge.

You’ll eventually make it to the Corley Motors plant.