Team Cherry’s Hollow Knight has become quite the smash hit. The new game for PC (and soon Nintendo Switch) is a little like a 2D version of Bloodborne meets Castlevania. For gamers looking for a walkthrough of the game, there are a few available.

The title starts with the knight dropping down into a chasm as he makes his way toward a city off in the far distance. You can attack enemies, jump around on platforms, and collect souls. You can also replenish your health by attacking enemies and collecting souls. Simply hold down the ‘B’ button until the knight replenishes his health, as demonstrated in the video below from YouTuber Tealgamemaster.

As explained in the video, Hollow Knight is a Metroidvania title, so you will have to explore various paths and unlock new equipment and abilities in order to backtrack and explore new routes in the map.

If you break through the wall in the first map, you can enter into Dirtmouth and talk to Elderbug, who will explain to you about the Forgotten Crossroads and the dangers beneath the well.

You won’t have much of a choice in where you go until you hop down into the well and begin exploring.

If you go to your right there are plenty of dead ends. Head to your left and head down to meet the cartographer so you can get a map and see what the area of Dirtmouth like. When you enter into new areas the map will be blank until you find a rest area. When you take a nap at a rest area in a new area, it will fill out the map for you. 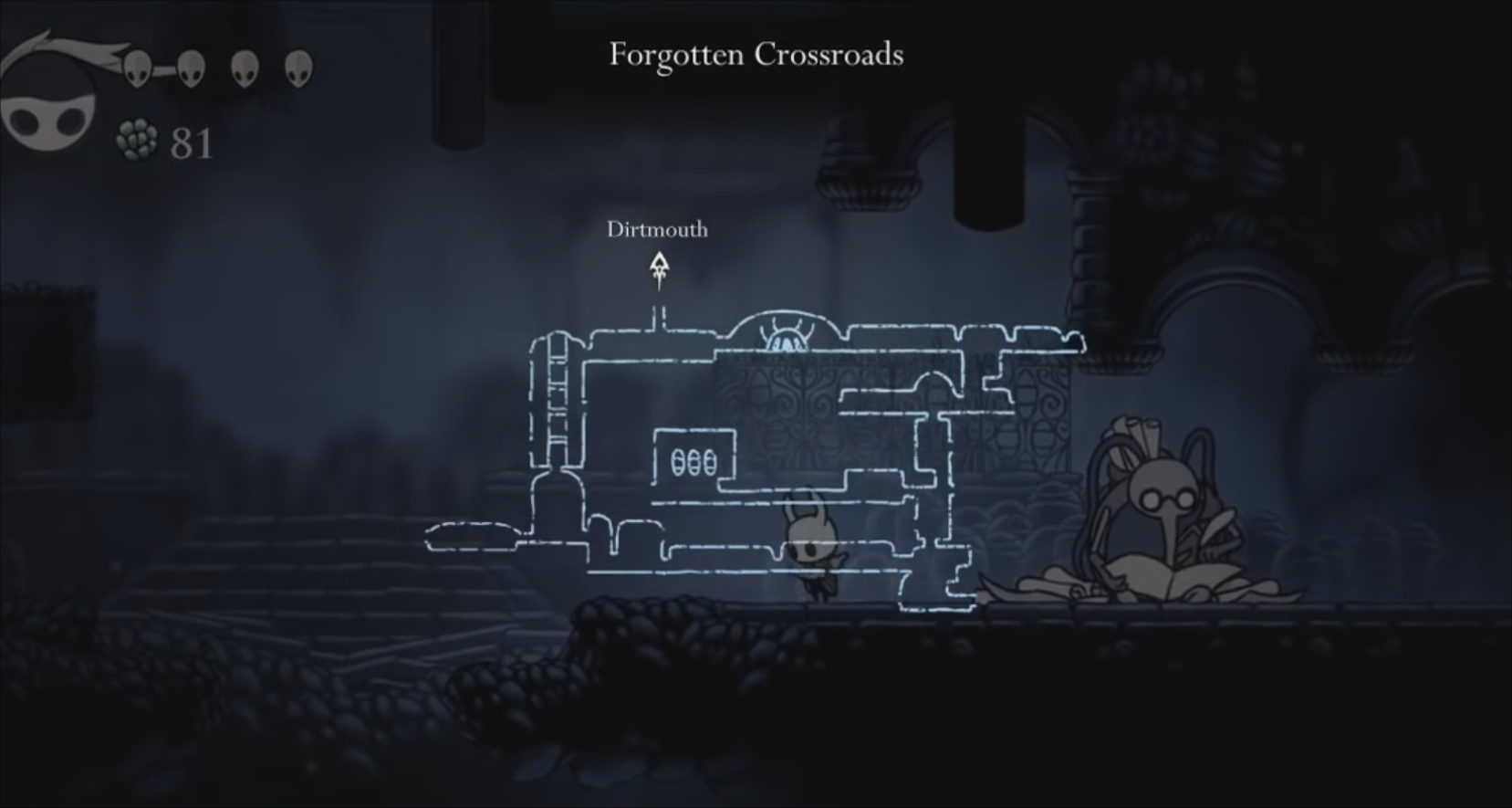 You can free a cute little creeper if you head to the left after meeting the cartographer. If you head to your right there’s a rest zone along with additional areas to explore. 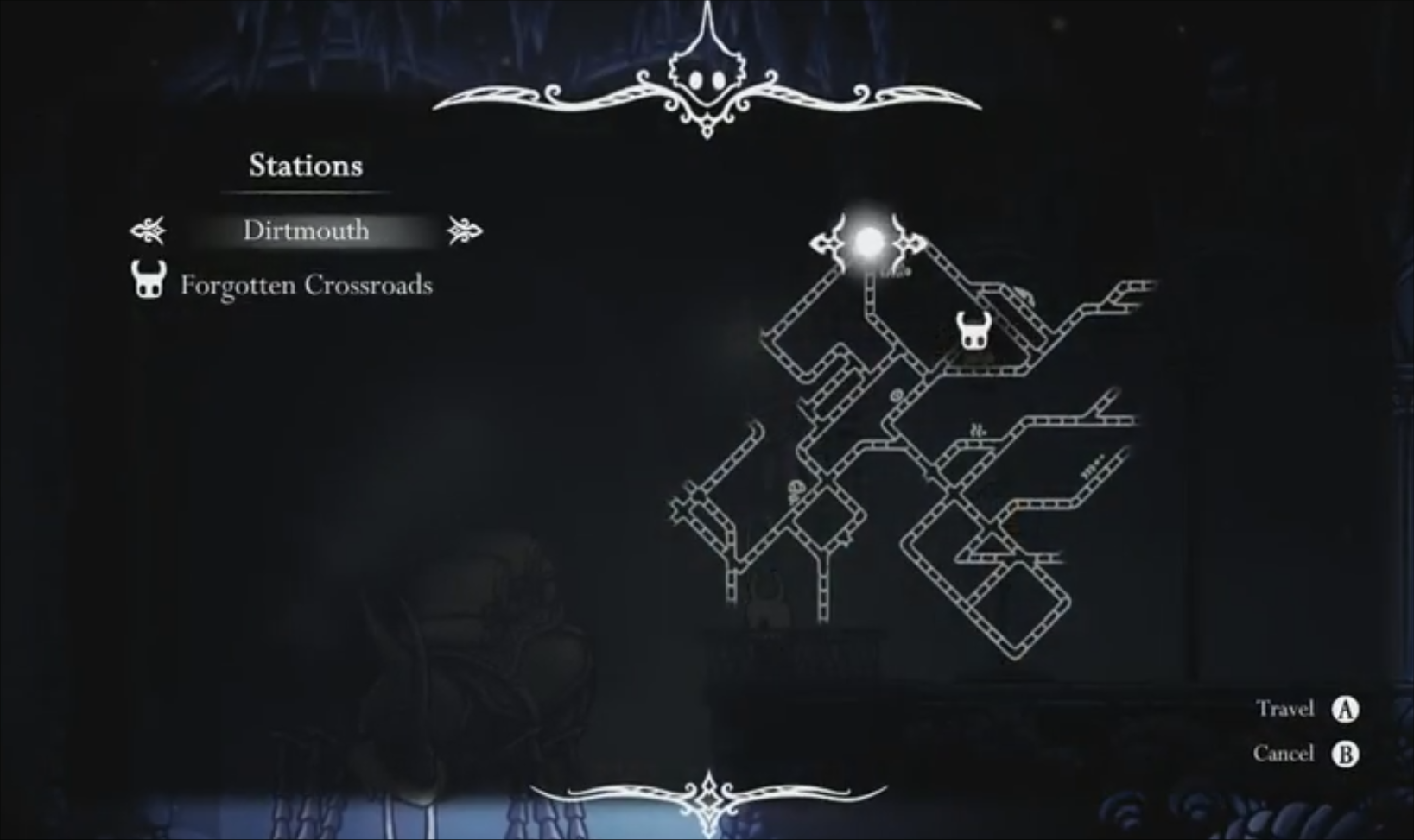 You’ll want to head toward the first boss fight on the map.

Defeat the False Knight and you’ll earn about 145 credits for your trouble.

Continue left and you can open up a door that will lead you back around to Dirtmouth. If you move over to your left you can enter into a temple and meet the Snail Shaman to unlock a projectile ability that will drain your soul meter but unlock a new ability for long range attacks.

You’ll find the Shaman near the location marked on the map in the image below. 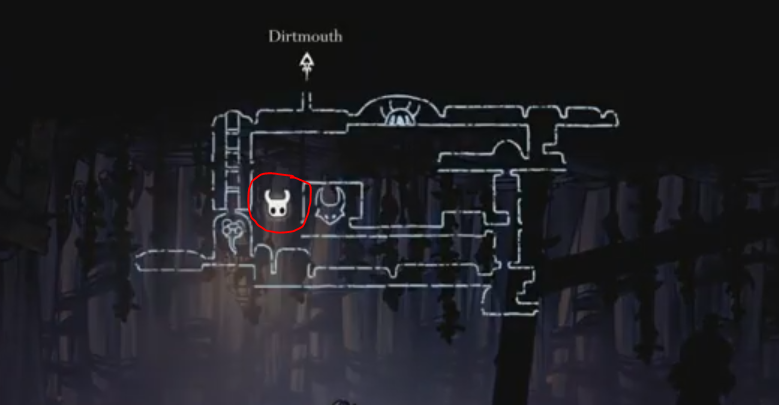 Venturing to your right will take you to the Ancestral Mound.

Follow the route through the area and break down the wooden blockades to get through some of the blocked off areas through the route.

Once you head down to your right from the opposite side of where the energy shrine is located, there will be an armored mini-boss you must battle to complete the Snail Shaman’s quest.

Much like Nier: Automata, if you die you can reacquire your dropped money and items if you head back to the last place where you died and kill your floating soul to recover your gear.

From near the start of Dirtmouth, head left and down to the middle platform down the steep corridor and you’ll find a new location, as indicated in the image below.

This will lead you to beyond the Pilgram’s Way gate, there’s another armored mini-boss.

Following the defeat of the armored mini-boss, you’ll gain access to the Greenpath area.

You can move through the area and head up top and to the left to find a rest area and expand the map of the Greenpath location. You’ll still need to purchase maps from the cartographers for uncharted areas.

Proceed to the area marked on the map to talk to the monster in the cave known as The Hunter. This will unlock your journal to include monsters you’ve defeated.

After talking to The Hunter, every time you kill a new enemy your journal will be updated to include that enemy type into your journal.

From there, you’ll need to locate the next rest area so you can update the map. You’ll need to head back to the penultimate room before you reach The Hunter and head down and to your right to access the rest area, as marked in the image below.

Proceed back into the main hub room. The room just under the rest area will require an extra light because the rooms ahead are extremely dark that lead toward the Stone Sanctuary.

Head through the long corridor to the left and travel up into another corridor to unlock another rest area.

In order to access the rest area you’ll have to pay a toll to unlock that particular bench. This will open up the area to lead you toward the route for facing the boss.

Take the path to the right after going to the very top of the cavity. When you reach the top – just outside the map area — head left to battle the giant bug king.

Defeat the bug and you’ll encounter Zote the Mighty.

This pathway will take you back down and around to an area you previously couldn’t reach on the map.

Head down into the next crevasse and proceed to go to your left to unlock an area that will allow you fast travel access to the stag. You can see where the area is on the image below.

As you travel through the map you’ll eventually encounter Hornet, who has a retractable javelin.

Hornet is no pushover. It will require a lot of patience, timing and quick reflexes.

Defeating Hornet will unlock the Mothwing Cloak, which you can use to dash with the right trigger.

Head back to Dirtmouth to after defeating Hornet and you’ll come across Zote again, along with a new character named Tiso. Tiso will invite you to battle it out in an underground arena located deep below. The battle arena will be available so you can test your might against other warriors.

If you would prefer to continue to explore and expand the map you can go back to Greenpath and proceed to the area at the top of the map to the far right to access a new location, as indicated in the video below.

You can head down to the bottom right of the map to meet up with Tiso again, as indicated in the map below. 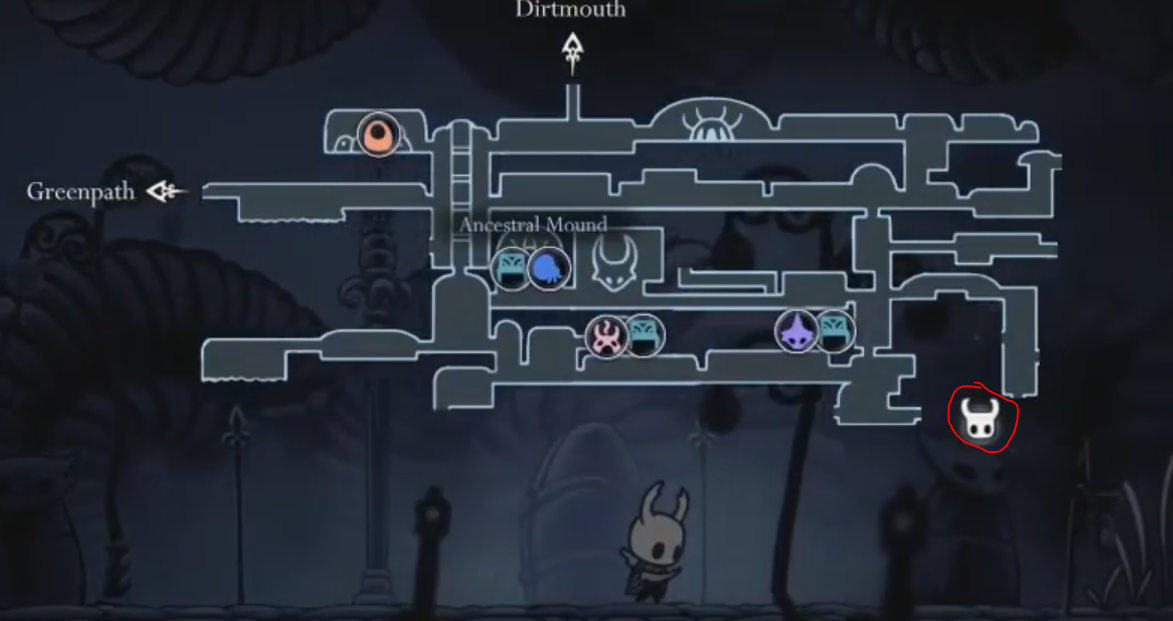 Down in the new area you’ll be able to challenge the Gruz Mother boss. You’ll find the boss if you head down and to your right after entering into the area.

The boss isn’t terribly difficult once you get the pattern down. Once the boss is defeated you can then access some new houses and other areas, as showcased in the video below.

You’ll meet Sly from down in the hut. He’ll then join the rest of the people moving around Dirtmouth.

Sly will sell you items like fragments of shards and simple keys, as well as the Lumafly Lantern. You’ll need the lantern in order to access the one area that is difficult to get through due to the lack of light.

The simple key can be used to open the old door, which will lead you to Confessor Jiji.

Back down in the area where you first meet Sly, keep heading to your right and use your dash to get over to the platform and you can enter into Salubra’s charm shop.

On the map, if you head down past the long corridor you can enter into the Fungal Wastes. It’s marked on the map below with the red circle.

Through the Fungal Wastes you’ll encounter Cloth, who will tell you that further down below is the warriors’ arena.

Continue to move through the wastes and you’ll encounter some praying mantis enemies. Beyond the Fungal Wastes, keep battling the mantis and you’ll eventually enter into the Mantis Village.

Within the Mantis village you’ll acquire the Mantis Claw, which will allow you to wall-jump. You can infinitely wall-jump, just like the Metroid games.

You can now proceed through the upper caverns beyond Greenpath after you unlock the wall-jump and you’ll have to fight two armored monsters; they’ll corner you from both sides and pepper you with projectiles, so if you go there you’ll need to be prepared. You’ll acquire a Baldur Shell, and access to a new path that leads upward.

As you move through the Queen’s Station, you’ll encounter Millibelle the Banker. Here you can store your money in case you die.

After talking to Willow, proceed to the far right and hop through the fungus spikes to get up top and access the soul shrine.

You can head back to the Fungal Wastes if you want to in order to explore more of the area in case you want uncover more of the area. There is a caterpillar during one of the lower sections filled with acid and the bouncy mushroom type things.

In the Mantis Village there is a giant cavernous opening in the ground you’ll need to fall down. As you move down you can unlock the shortcuts and proceed to the Mantis Lords boss.

The Mantis Lords have three attacks. You must dodge their projectiles, their air-drop attack and their dash. You can see how to beat them with the video below.

After defeating the Mantis Lords, you’ll unlock access to Deepnest, a very dangerous new location to explore. You will find the cartographer shortly through the area hiding behind some thorny bushels.