Northgard from developers Shiro Games recently entered into Early Access on Steam. The strategy game is available for $19.99. It’s turned out to be quite popular among Steam users, featuring a Norse-themed story centered around building settlements growing your Viking village. For gamers in need of a quick crash course in how to play the game, this beginner’s guide might help.

There’s a series of episodic videos being posted online by various YouTubers, and one of which that goes into detail of how to get your settlement up and running quickly. GrayStillPlays offers a bit of commentary while walking gamers through the basics of Shiro Games’ new strategy title. Check it out below.

In Early Access there are three different clans, but in the full version they plan on having a total of five clans.

The three clans include Fenrir, Eikthyrnir and Heidrun. Each clan has its own bonus and abilities, depending on what your style of play you prefer.

One of the things that’s mentioned in the video is that the pause button in Northgard is an actual pause button. You can’t strategize, plot and build while the game is paused. It literally pauses everything. So you have move fast and move swift when it comes to building up your settlement in Northgard. 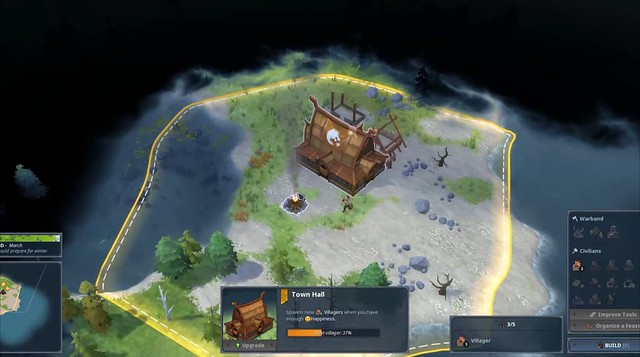 You’ll want to quickly put down a Scout Camp as quickly as possible so that your villagers can train to become scouts and then uncover the fog of war and discover new areas to explore.

You’ll also want to put down a Town Hall to spawn more villagers once their happiness reach a certain level, and a Woodcutter’s Lodge so that they can become woodcutters and harvest wood from the nearby forests.

Now, in Northgard the maps randomly generate, so you’ll need to scout different areas every time you start a new map.

Once you discover new territory, use your scout to colonize the new area.

With wood, you’ll be able to make more wooden structures, including fishing places and training camps. Additionally, if an NPC is not working be sure to click on the NPC and right click a structure to force them to build or help out other NPCs.

Once you colonize a sector that has deer or other animals, you’ll want to build a Hunter’s Lodge so that you can begin to hunt animals and gather up food resources.

You can also upgrade and improve your tools by by clicking on Improve Tools. However, you’ll need 5 iron to make that happen, and iron is difficult to come across. It’s also mentioned that organizing feasts can help give a major bonus to your villagers to help complete more tasks and upgrade your stuff quickly. In the video, the Quarry was no longer producing any resources, but once he got a hold of the iron deposit he built a mine. He destroyed the quarry in order to make use of the mine and free up a spot in the other sector.

Keep in mind that each sector has a limit on how many buildings you can have within that area, so place down the buildings wisely depending on how you plan to balance your resources.

You’ll likely want to make a Warchief once you get enough resources, as he’ll be able to beat the crap out of enemy NPCs and rally your troops. You’ll also want to make a healer from the Healer’s Hut if you want to keep your troops alive.

Also, be sure to utilize the Lore menu to upgrade your abilities for extra buffs. They can help out depending on how you plan to grow your settlement and what you’re looking to specialize in.

You’ll need to balance your resources and stay on the move, keeping your wood, stone and food supplies intact.

If your settlement comes under attack or your buildings end up getting damaged or catch fire, you’ll need additional resources to repair your buildings. It’s something to keep in mind as you gather resources.

Northgard is available right now for PC. The game is currently going through the Early Access phase.