Every time it’s time to do a Naruto Shippuden article I can’t help but notice how ridiculously long the headlines have become. Anyway, Bandai Namco recently released the latest DLC story pack for Naruto Shippuden Ultimate Ninja Storm 4 called Road To Boruto. The DLC is available right now for PS4, Xbox One and PC.

Gamers interested in the new content and curious about how to play through it, there is a walkthrough guide available from YouTuber Shirrako. You can view the whole DLC below, which clocks in at three hours.

The Boruto’s Tale option is available in the Game Mode from the options menu. It follows closely the events that took place in Boruto: Naruto the Movie.

The story is set after the events of Naruto: The Last movie so be sure you’ve played through all of Naruto Shippuden: Ultimate Ninja Storm 4 before you start up Boruto’s tale.

Shirrako does right by the fandom, using Japanese dubbing with English subtitles. None of that awful English dubbing.

The story starts with a flashback between Naruto and Sasuke, starting as friends and then becoming bitter rivals, and then eventually ending their final fight as reluctant enemies.

Players start the fight as Sasuke, and there are a number of bonus requirements as well. Sasuke will still be missing his arm from his fight with Naruto, limiting his abilities quite a bit. Nevertheless, he’s still a formidable opponent.

Be sure to use his specials as often as you can. To dwindle down the life of the Mystery Man.Once his life has been removed, you’ll need to finish up with a quick-time event. 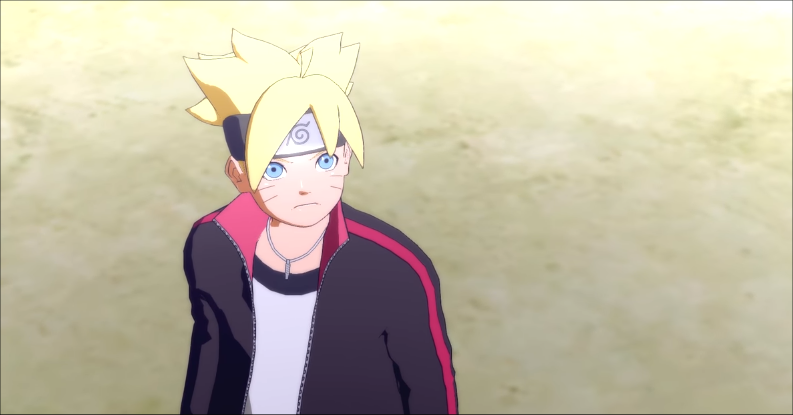 First mission involves finding Sarada at the Hidden Leaf training field. Like in the standard story mode for Naruto Shippuden: Ultimate Ninja Storm 4, there are plenty of on-screen icons to lead you toward your destination, including a mini-map.

If you need help finding your destination or whereabouts of a quest location, press Triangle (or ‘Y’ on Xbox).

Head out of the village and to the Survival Training Field for yet another cinematic. Sarada and Mitsuki will be out there with Konohamaru, leading to a three on one against the sensei. You can edit your Ninja Tools or items before the star tof the fight. 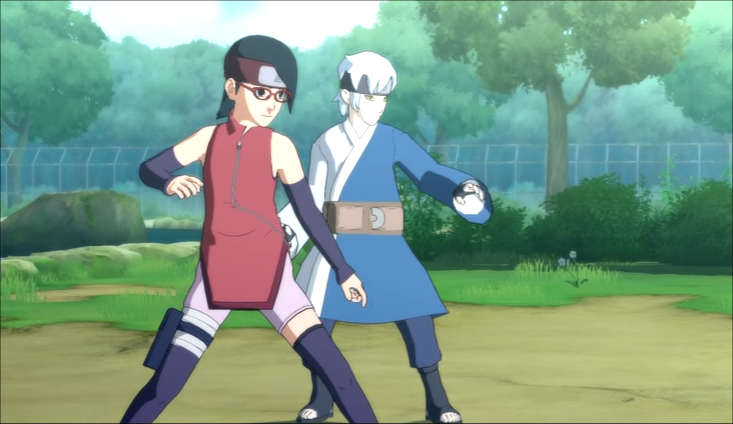 Just like in the standard Naruto Shippuden, you can call in Mitsuki and Sarada using the L1 and R1 buttons (or left and right bumper).

Boruto’s Tale follows the petulant little boy as he defies his calling, scrounges up trouble and beats people up. Unfortunately we don’t get to see the bear getting its lights knocked out, but it happens off-screen. 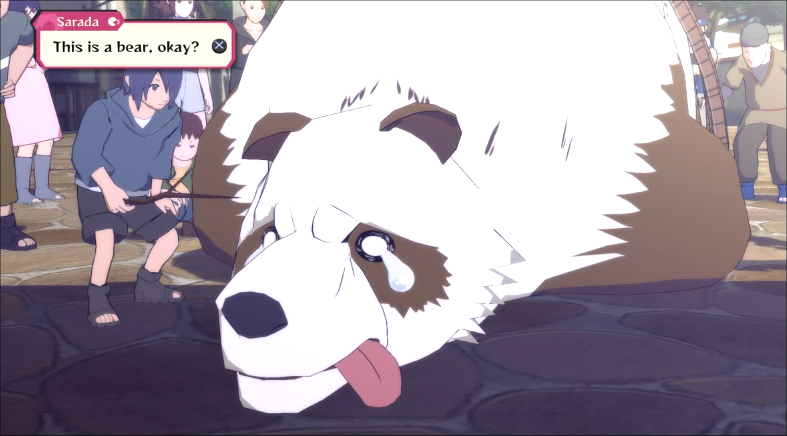 Boruto and the others go to see Naruto, but things don’t end well and Boruto ends up storming off and eventually heads back home for Himawari’s birthday.

Boruto threatens Naruto to show up for Himawari’s birthday, but Naruto sends a shadow clone instead.

Naruto proves to be a deadbeat dad. 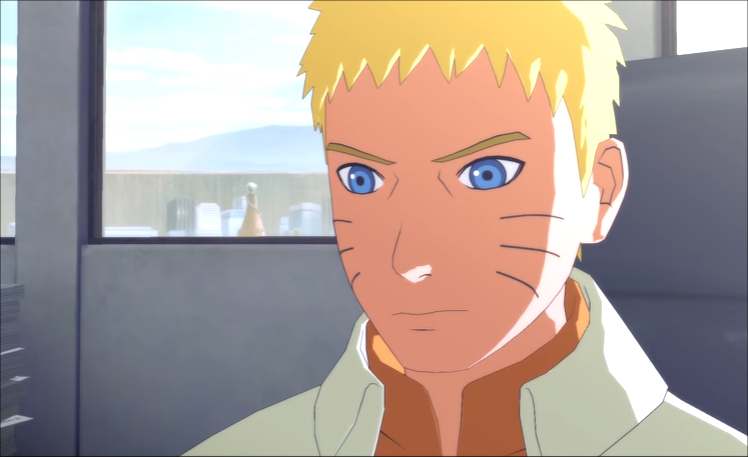 Sasuke ends up showing up looking for Naruto but Naruto isn’t home; Boruto, however, develops a man-crush on Sasuke.
R
After another cinematic players will be able to take control of Boruto again and begin the side-quests… including, the option to take on Boruto’s 10 tasks.

Boruto will attempt to ambush Sasuke to test his might.

Sasuke is fairly difficult, so be sure to keep your distance and don’t let him start his combos, otherwise he’ll quickly and most certainly kill you with ease.

Once you win the fight it turns out that it wasn’t actually Sasuke, just a shadow clone. Boruto is so taken aback that he wants Sasuke to train him. Sasuke scoffs and says that until he can make Rasengan he won’t bother training him.

You’ll then be able to switch over and play as Sarada, who goes looking for her dad, Sasuke. Sarada and Sakura convince Sasuke to train his daughter.

You’ll get to play as Sarada, and must fight Sasuke. His attack power will be up by 20%, so be careful to avoid being hit.

Sasuke will actually give you some useful advice while you fight, including throwing projectiles as a distraction in order to close the distance and use a devastating combo. 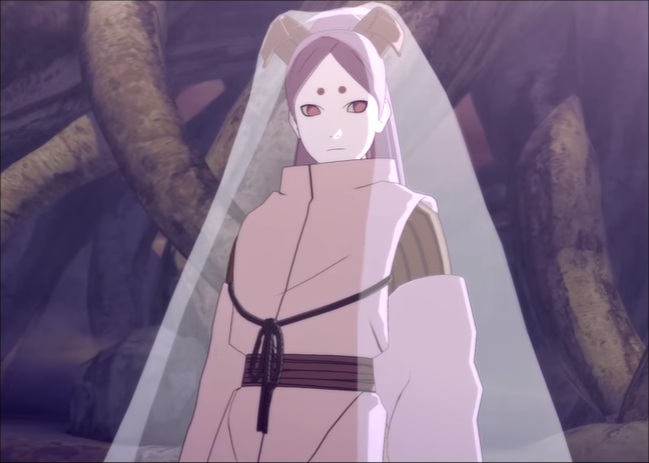 The game will switch back to Boruto, where he’ll have to go find Sasuke after mastering how to make a Rasengan.

Head to the Hidden Leaf Forest and you’ll find Sasuke there.

Boruto is disappointed to find that Sasuke isn’t impressed with his tiny Rasengan. Boruto runs off and ends up running into Katasuke, who offers him an experimental Ninja Tool to power-up his abilities and use it o impress Sasuke.

Take the device and head back to the Hidden Leaf Forest or take on the other side quests in the area. Sasuke will attempt to test Boruto’s full power in a duel. The petulant child insists on being much different and stronger than his father. If you beat Sasuke with 40% of your health remaining you’ll get an extra bonus and the ability to play as the Ninja Tool-enhanced version of Boruto. 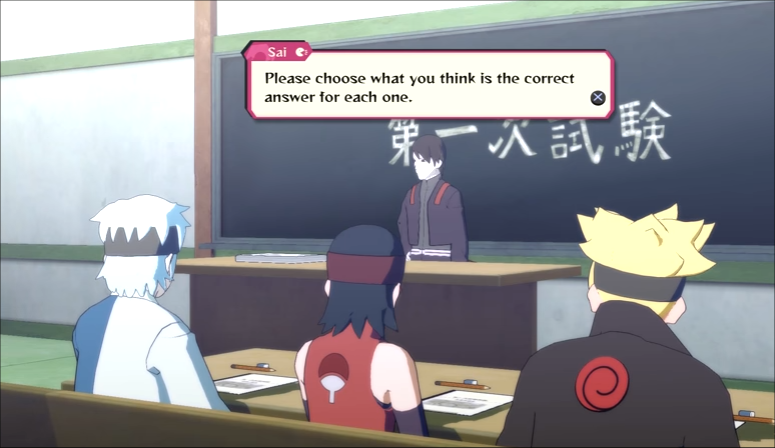 The next segment involves going around talking to NPCs to help get answers for the Chunin Exam.

The NPCs will be marked on the mini-map with little golden scrolls over the head.

You can ask the NPCs about the past history of the village, ninjas and the Hokage. If you talked to enough NPCs, you’ll be able to press Square to recall a hint and help you get the answers for all 10 questions.