Resident Evil 7 has multiple endings depending on various distinct choices players can make at vital points in the game. There’s a good and bad ending in Resident Evil 7 but if you need a bit of help figuring out what happened, this guide clearly lays it out for you, whether you’re playing on PC, PS4, PSVR or Xbox One.

The game starts with two messages being played by Mia Winters to her husband Ethan Winters. In one message she’s jolly and telling him how much she misses him. In the second message she’s disturbed and tells him to stay away. This occurred in 2014, three years later in 2017 Ethan receives another cryptic message from Mia, and this time he follows it to Dulvey, Louisiana, to a seemingly abandoned farm house.

When Ethan gets there, he finds out that various people had gone missing when checking out the house since the owners, the Baker family, had seemingly gone missing as well. Nevertheless, using some old VHS recordings as a guide, Ethan discovers a hidden passageway through the fireplace that leads him down into a cellar where he finds a Mia… peacefully resting on a bed. He awakens Mia and the two plan their escape, but Mia is disturbed… troubled… and she didn’t want Ethan to find her.

As Mia leads them out of the house she turns and attacks Ethan, forcing him to retaliate by striking her with an axe. Mia doesn’t die, though. A contorted face twisted into a monstrosity of rage and violence, Mia grabs a chainsaw and proceeds to maim Ethan’s arm, cutting it off above the wrist.

Ethan manages to find a gun and seemingly “kill” Mia… again. Only he’s knocked out by Jack Baker, the owner of the old plantation.

In reality, Mia did not just magically morph into an evil witch. It turns out that she was actually being controlled by an E-Series experiment known as Eveline, a powerful little girl who was part of a top secret experiment. In a flashback sequence it turns out that Eveline is in Mia’s mind, twisting and distorting her sanity, forcing her to act like a monster – Eveline tells Mia to punish and kill Ethan, which is what led to Mia cutting off Ethan’s arm and attempting to murder him with the chainsaw. 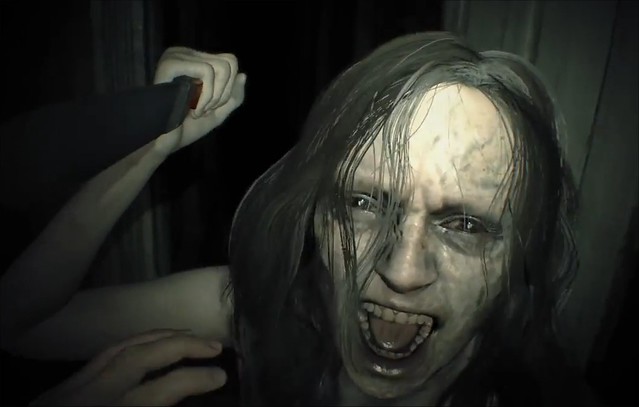 Eveline had escaped from her holding cell aboard a research lab ship traveling down the Mississippi river. Mia’s job was to work as a caretaker over Eveline, who had delusions of wanting a family. Mia pretended to be her surrogate mother. Operations director Alan Droney hadn’t properly secured Eveline during one their tests and she managed to escape. They were unable to keep her constrained using the serums, and she began a rapid mutation process. As an E-virus test subject Eveline had the ability to use psychotropic distortions, hallucinations and suggestion to force people to do what she wanted, all through a psycho-physiological mutagen.

During a flashback to 2014, it’s discovered by Mia that Eveline gestated offspring in the form of regenerative mutants, some of which were formed from the ship’s crew members. Mia attempts to kill Eveline but fails, and instead finds herself engulfed by the mutagen and controlled by Eveline. Before Eveline takes over completely, Mia manages to send Ethan a message telling him to stay away and forget about her. She does this shortly before the entire ship crashes ashore.

However, during the three year period, Eveline had ventured outside the ship and began infecting any and everything nearby, including the Baker family; starting with Jack and working her way through Marguerite Baker, Jack’s wife, Lucas Baker, Jack’s son, and Zoe Baker, Jack’s daughter. 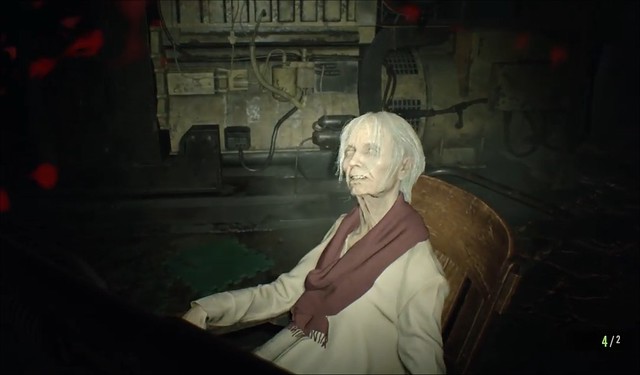 Eveline ended up living with the Bakers due to her quickly deteriorating physical form. It’s explained in one of the reports that she has rapid cell growth, turning her into an old woman, thus making her physical form rather limited and bound to a wheelchair. She still has very strong psychic abilities, however, and still craves a loving family. Thus, Eveline uses Mia to send a message to Ethan to lure him to the plantation as one final attempt to create the family she always wanted.

Before Ethan arrived, over the course of the three years Eveline used the Baker family to recruit and grow her family, but most of the people died in the process. She managed to acquire 13 people who successfully become assimilated as monsters, while others failed to genetically adapt and ended up becoming cannibal food.

Ethan learns of these horrors after having his arm sewn back own by Marguerite, and forced to partake in a disgusting feast of human and animal organs.

Ethan manages to escape by tipping over and breaking his chair, he then proceeds to battle Jack Baker throughout the mansion, seemingly “killing” him by cutting his body in half with a chainsaw and blowing his upper torso to pieces. 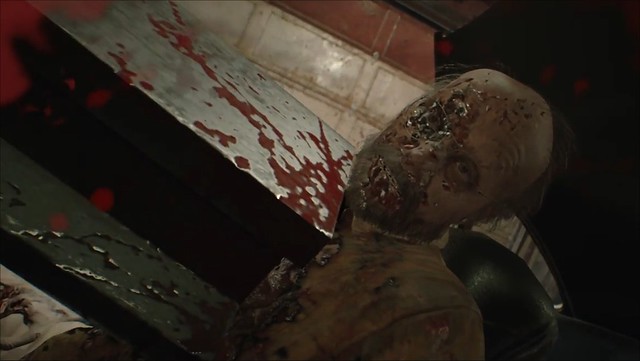 Ethan then manages to kill Marguerite with the aid of Zoe, her daughter. Zoe promises to help Ethan escape and even offers him guidance on how to help Mia as well. Zoe managed to avoid mutating like Jack and Marguerite since her exposure to the virus was minimal,but fears she will eventually lose her mind like Lucas.

Zoe directs Ethan around the plantation to recover certain items in order to create a cure for the D-series virus, which is what the Baker family was infected with. After getting briefly captured by Lucas and then freed by Ethan – after Lucas forces Ethan to partake in a series of SAW-like puzzles – Zoe concocts an antidote, but only makes enough for two people.

Before the serum can be administered Jack Baker attacks one last time as a giant mutated monster. Ethan is able to defeat him using one of the serum concoctions. Unfortunately, Ethan is forced to choose to either help Zoe or Mia. If Ethan chooses to help Mia, then Zoe stays behind and Mia and Ethan leave to go get help. If Ethan chooses to help Zoe, then Mia is left behind and Ethan and Zoe go to get help. 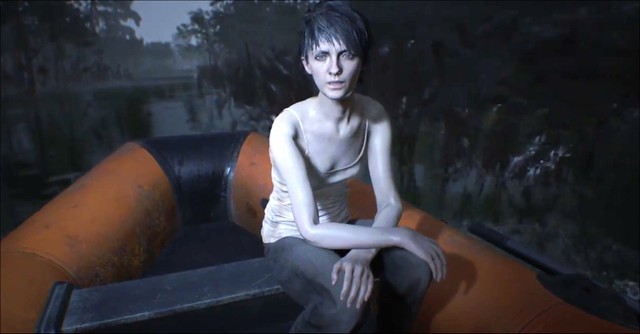 If you help Zoe, you actually don’t help her at all. Essentially Zoe gets killed right after they leave the plantation. This occurs after Ethan and Zoe happen upon the crashed research boat. Eveline infects Zoe again and breaks her to pieces after solidifying her body. Ethan gets captured and Mia returns to the downed ship to find Eveline and rescue Ethan.

Mia manages to rescue Ethan, but ends up dying after Eveline takes control of her again and forces her to try to kill Ethan. Ethan impales Mia and she ends up turning to stone and crumbling to pieces. During Ethan’s time inside of Eveline’s cocoon he has a physic impulse from Jack Baker, who calmly explains that his family was normal but after being warped and controlled by Eveline, they turned into those monsters. Jack beckons Ethan to help free his family of Eveline’s psychic control and to kill her once and for all.

Ethan manages to track down an antidote for the E-Virus and battle Eveline one final time after he finds her in the old mansion, sitting in the wheelchair up in the attic. Ethan receives a bit of help from Redfield who drops Albert Wesker’s gun down to aid him during the final battle.

Redfield rappels down and helps Ethan to safety, flying him home in an Umbrella Corporation helicopter.

If you have Ethan choose Mia to administer the antidote to you’ll get the good ending. Mia and Ethan leave Zoe behind and head to the old lab ship on their way out of the Baker’s plantation. Instead of dying, though, Mia is thrown off the boat and Ethan is captured. Mia proceeds to track down and save Ethan. Since she has the antidote in her stream, she doesn’t mutate and battles to resist the psychic influence from Eveline.

Ethan manages to leave the ship, find and kill Eveline and when Redfield shows up, Ethan is reunited with Mia on the helicopter. The game ends with Ethan explaining that when one door closes another opens, and that he has a second chance with his wife.