Now that it’s out for the Xbox One, PS4 and PC, a lot of gamers have been getting in time with Respawn Entertainment’s first-person mech-shooter. Titanfall 2 centers around the intergalactic conflict between the Militia and the IMC. The IMC is known for hiring in ruthless mercenaries to do their dirty work, and the Militia are usually barely scraping by some fights with just the skin of their teeth. For players wondering what the campaign is about and how it starts and ends, and what’s happening in that final ending sequence, this guide just might help you out.

The game starts with rifleman Jack Cooper getting training from Captain Lastimosa, a veteran who had been riding and commanding Titan BT-7274. Cooper isn’t supposed to be training as a pilot, but Lastimosa does so anyway due to how quickly pilots die in the field and how in need they are of more competent fighters on the ground.

Before Cooper can complete his training as a pilot, however, Lastimosa and the rest of the squad are called into battle, forcing Cooper to drop down onto the planet Typhon where they engage IMC forces. The IMC, however, manages to complete slaughter the Militia and even though Lastimosa is more than adequate in a Titan, multiple mercenary Titans manage to surround and damage BT-7274, incapacitating the Titan and basically killing Lastimosa.

Before dying, however, Lastimosa gives over authorization and pilot command to Jack Cooper, which allows BT to establish a neural link with the rifleman.

After repairing BT, the duo make their way through Typhon, helping some other militiamen along the way and defeating some of the mercenaries hired by the IMC to secure the planet Typhon and a rare and powerful device known as the Ark.

BT-7274 convinces Cooper to finish the original mission, which involved meeting up with the squad commander Anderson at an IMC facility. They end up getting waylaid when BT suggests for them to take a shortcut through a valley that ends up seeing BT getting captured and Cooper has to save the Titan from being destroyed by one of the IMC mercenaries named Ash. After Cooper and BT escape from Ash’s death-trap production facility they decide to continue the mission and rendezvous with Anderons.

However, upon reaching the IMC testing facility, Cooper and BT discover that Anderson has died, with half his body stuck through the floor. It turns out he had a wrist device that allowed him to tap into a time rift that occurred at the IMC testing facility where they were utilizing a device called a Fold in order to harness the power of the ARK that could rip a planet out of the very fabric of existence. The Ark was highly unstable and an incident occurred at the facility, creating a quantum entanglement where time was no longer stable in the area.

Cooper managed to get a hold of Anderson’s device and travel back and forward through time to discover that the IMC planned on using the Ark to destroy the planet Harmony. After attempting to gather data from the Ark in the time rift, BT and Cooper decide that the Ark is extremely dangerous once they see how destructive it is and what the IMC are planning to use it for. They decide to head to a nearby radio beacon installation to send word to the rest of the Militia fleet about the Ark. 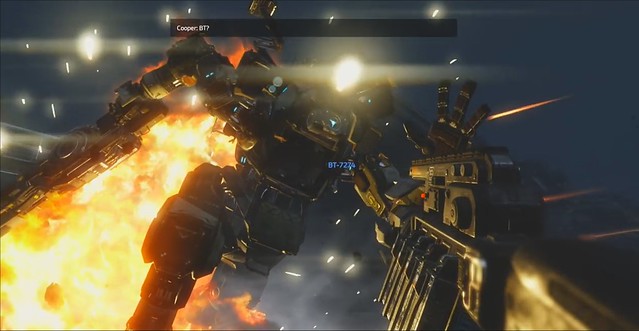 Before Cooper and BT can send out the signal, they’re intercepted by another mercenary named Richter who is a sadist. The duo manage to defeat him and get the message out to Commander Sarah Briggs. This results in the Militia sending a fleet down to track down the remaining mercenary group, who they discover has a working Ark in their possession and are attempting to get it into another Fold installation and use it to destroy Harmony.

Briggs accompanies BT-7274 and Cooper as they launch an all-out assault on the IMC in an attempt to recover the Ark. The mercenaries, however, manage to get away and flee toward the Fold installation. The Militia hunts down the mercenary ship but end up getting half their fleet destroyed by one of the top Titans on the mercenary squad named Viper. During the fray, BT and Cooper are separated, leading Cooper and another squad led by Bear to commandeer an IMC flying gunship.

They use the gunship to catch up to the mercenary ship, the Draconis. Another pilot, Baker, manages to get BT to Cooper, and the duo reunite and battle Viper on the front of the gunship. Even though they blast Viper off the front of the ship, as BT preps to throw Cooper onto the Draconis Viper picks both of them up and they begin to fight in the air. The trio land on the Draconis while Cooper rolls near the edge and Viper manages to crush BT and rip off one of his arms. While Viper is ripping off BT’s arm, BT manages to rip off the cockpit hatch to the Viper, exposing the pilot and allowing Cooper to fire off a shot and kill the pilot.

BT and Cooper finally make their way onto the Draconis and battle their way toward the Ark. Cooper places the Ark into BT’s hatch while the Draconis crash lands. Cooper and BT are captured and they threaten to kill Cooper if BT doesn’t open the hatch and hand over the Ark. BT opens the hatch but fires off a salvo and disintegrates a few of the soldiers before Slone impales BT with a gun and tears him apart. Before dying, Cooper grabs BT’s datacore and an emergency kit and heads toward the Fold installation. 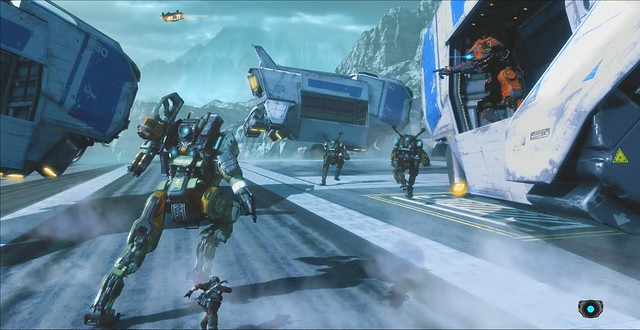 Briggs manages to send down another Titan chassis that Cooper uses to place BT’s old datacore into and the duo storm the Fold. After defeating Slone, they attempt to get the Ark out of the Fold device but the surge disrupts BT’s systems. The leader of the mercenaries is instructed by the IMC’s General Marder to kill BT and Cooper while they’re down, but the mercenary leader says he wasn’t paid to kill them and he already fulfilled his contract in delivering the Ark, and proceeds to leave the planet Typhon.

BT and Cooper recover before the Fold is used to destroy Harmony, and BT fires himself toward the Ark while exploding. Before doing so, BT throws Cooper out of the fold device, and Sarah Briggs brings a dropship down to rescue Cooper as they escape from Typhon. The entire planet cracks in half from the implosion of the Ark and the Fold device.

Cooper is welcomed into the Militia as a Titan pilot, graduating from being a simple rifleman. During the end sequence, however, it’s revealed that Cooper’s helmet – which is sitting on a desk – flickers slightly from the neural connectors, indicating that part of BT may have still been inside his helmet, possibly in result of Cooper and BT being involved in the time rift disruption at the abandoned IMC facility, in addition to directly interacting with the Ark.

The end of Titanfall 2 has many little loose ends that easily sets it up for another potential sequel.