Crystal Dynamics’ Rise of the Tomb Raider came out for PC a few months after the Xbox One and Xbox 360 dropped. The game features some sprawling platforming segments, animal hunting and lots of third-person shooting. One way to keep the action fresh and gamers engaged is story based content that Crystal Dynamics released called Baba Yaga: The Temple of the Witch. There’s a complete gameplay walkthrough of the DLC to help gamers out if they happen to get stuck.

YouTuber Tetra Ninja did a complete guided walkthrough of the new content, which only clocks in at just under an hour. You can check out the video walkthrough below.

The story picks up directly after the end of the main story mode where Lara saves the day, kills the bad guys and restores peace to the world. In the process various people die, such as Jacob, and Lara decides to use her newfound heroism to help rebuild the village by exploring more of the land.

To access the Baba Yaga DLC you’ll need to fast travel to the Soviet Installation. It’s on the far left side of the fast travel map in the middle.

At the start of the mission there are a few Trinity soldiers that must be dispatched, which can be done easily enough. You’ll find a person hiding in one of the lockers in the sawmill named Nadia, and she puts Lara on a mission to find her missing grandfather. It’s to a trail off to the left of the sawmill that leads into a cave. There are a few Trinity soldiers just before the cave entrance that need to be dispatched before getting into the cave.

There’s some standard platforming segments that lead across the edges of the cliff that take’s Lara all the way around the mountain pass to a small camp. Venturing inside will lead you to a small fire pit that eventually leads to a cavern with pollen that drugs Lara and turns the whole thing into a nightmare.

After going through a linear segment there’s an arena battle with some wolves. It might be best to use the gas arrows to keep them at bay while blasting them down and avoiding the fire from the chicken-legged witch house.

After killing the wolves and Lara falls into the water, the game switches back to the real world instead of the nightmare.

It goes back to being quite linear from here on. You need to get upstairs and break down the gate using the machinery at the pollen making pit. Attach the hanging cage to the board behind the fire pit. Wait for the tension to get to the max after attaching the cage to the pulley system and then open the fire pit so that it burns the rope and forces the cage to swing at the locked gate to break through it. 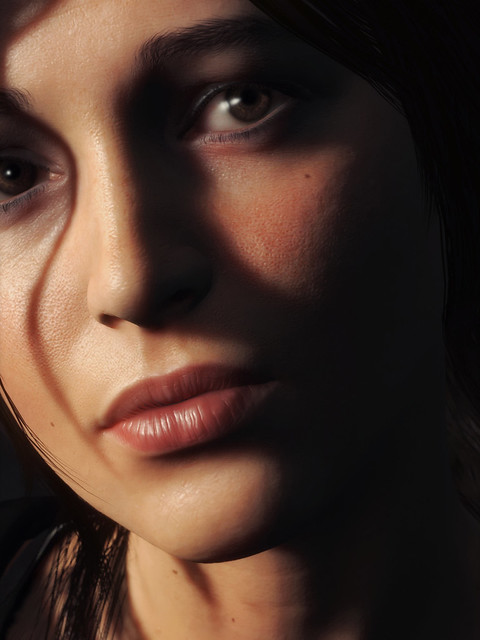 You’ll need to proceed to make a counter-agent against the pollen. This requires a few ingredients scattered around the installation area. You’ll need to locate some seed pods and some supplies from deer. Use the map to head to the purple locations marked on the map to find the ingredients for the antidote. You’ll find quite a few of the supplies inside of a cave; use the shotgun to blast open the wooden barricade over the cave to access some of the supplies inside.

As for the deer… most of them will be scattered about and many might be dead already. For those who aren’t, you can use your bow to track down and kill the remaining deer to get a hold of the livers.

You’ll find the last ingredient to make the antidote in the soviet camp at the train yard. It’s up inside of a building After taking out some of the soldiers, You’ll need to fast travel back to the Wicked Vale and use an antidote to pass through the pollen without being affected.

Race through the woods and you’ll find a small camp that has a small creak between the rocks. Pass through the creak to get to the ruins.

Climb up the cliffs after breaking down the wooden barricades and attach a rope to the lift and another to the wench. You’ll need to pull down the lift on the left side as low as possible and then race over to it to climb up before it raises back up. Attach the rope to the wench. Head back down and attach another rope to the post next to the wench, so you can use it to climb up from the bottom. Position the first lifts so you can climb up to the platforms that lead around to the second platform that leads to the house lift. You need to wind up the second wench to work as a platform to get to the house-lift. 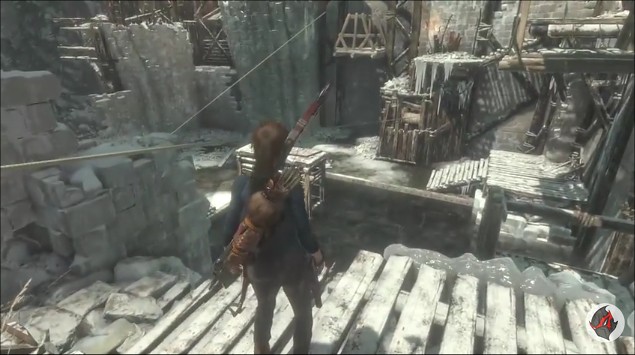 After making it to the save point and rescuing Nadia’s grandfather, you’ll have to face off against Baba Yaga in a classic boss fight.

The objective is to reel in Baba Yaga by shooting an arrow at her and reeling her in close to the fire pit. She will attempt to cut the rope while being reeled in. You’ll nee to shoot at her to prevent her from cutting the rope. Once she gets directly over the fire pit, press the button to open the pit and blow up her flying, flaming cauldron. You’ll need to do this twice and then the stage will change and flood with water.

head to the platform, climb up and kill some of the enemies as you get to the next fire pit. Rinse and repeat the method of reeling her in, shooting at her to keep her from cutting the rope, and then burning her once she’s over the fire pit.

After that head back down the hole and head to your right. There’s a series of platforms and some more enemies you’ll need to kill. Continue forward and climb up the rock face to get behind Baba Yaga. Shoot her away and then activate the switch to start the rotating platforms. Ride the rotating platform until you get to the platform that leads up to the next fire pit on top of the platform.

Ride the rotating platforms until you can get up higher on the stage.

Take out more of Baba’s henchmen and then lure her back over the final fire pit to end the fight.

That’s all the walkthrough for Baba Yaga Plot. You can try all cheats for Rise Of The Tomb Raider main game, you can visit our cheat post. Happy Gaming!