The season finale of Life Is Strange Episode 5 Walkthrough comes to an end. It’s been building up for over the past year and has many fans looking to see how it all concludes.

There are some really tricky segments in the final episode that will likely have some gamers scratching their heads while others will attempt to tear out their hair in frustration. Don’t worry, though, there’s a complete gameplay walkthrough guide available for Life Is Strange Episode 5: Polarized, showing how to get through each segment and overcome each of the game’s unique puzzles.

The final episode takes on a very dark turn from the others, delving even deeper into the psychological aspects of time travel and the way a human’s mind can unravel from the stress. It’s a very trippy gameplay experience for anyone looking for a deep, sci-fi themed psycho-thriller. YouTuber XCageGame has a complete gameplay walkthrough available in a series of videos you can check out below.

Unlike the previous episode, this latest one doesn’t have as many traditional puzzles to get through, nor does it have as many codes to find and input. However, there are a few segments where you will need to do specific tasks in a specific order in order to proceed.

In the segment after Max uses the photo on the table to go back in time, following Jefferson taking those creepy photos of her, she ends up in the chair where she’s talking with Jefferson. After Jefferson explains what happened with Nathan and how he killed and buried him — after Jefferson walks away look at the diary on the table. From there, proceed to rewind time all the way back to when Jefferson is about to walk away, interrupt him by asking him about Max’s diary. He’ll throw it on the floor and Max can use it to rewind time after looking at the photo. 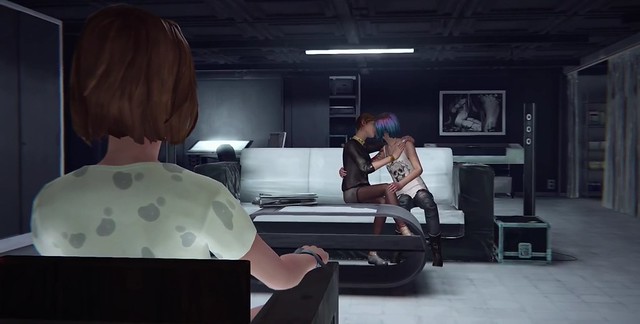 After talking to Principal Wells at the art gallery in San Francisco, you can proceed to the next scene by walking up to Max’s photo entry in the gallery. After listening to Chloe’s call on the phone it’s possible to reverse time by focusing on Max’s photo on the gallery wall.

In the “Dark Room” – after reversing time following the gallery expo – in order to save David (who ironically is there to save Max) you have to warn him about Jefferson. In order for this to work you’ll need to reverse time and ask Jefferson for a final request, ask Jefferson for some water.

After getting the water, wait until Jefferson hears David coming into the “Dark Room” and when he’s up against the wall “Warn” David about the ambush. David will get the gun knocked out of his hand anyways, but while this happens look at the table with the bottled water on it and kick it at Jefferson, this will distract him enough to lose his grip on the tripod. Jefferson will attempt to run for a gun in the cabinet to shoot David. You can prevent David from being shot by pulling the cable for the light, this will distract Jefferson long enough for David to race over and punch him in the face a few times.

When attempting to get to the diner and you’re trapped in the shop with the fire blocking the exit, you can activate the sprinkler, which will electrocute and kill the fisherman. Proceed to enter the room with the fisherman after the fire has been put out, and then rewind time back before he died in order to try and save his life.

To prevent the Two Whales diner from exploding, you’ll find a tipped over crate with sand on the ground and a shovel nearby. It’s directly beside the red newspaper vending machine that’s standing upright and a tipped over, blue newspaper machine. Activate the sand prompt to shovel some sand onto the gasoline to stop the fire from spreading to the diner and prevent it from blowing up.

When finally getting back to the party with Chloe, you have to convince her not to run off. You have to tell Chloe that Jefferson kidnapped Max, that Max really messed up time, and that David actually does care about Chloe.

After heading to the room Max will make a comment about being herself again. Proceed to Max’s room, 219, to finally get out of the hallway puzzle maze.

One of the more difficult segments is navigating through the stealth segment to avoid all the creepy guys like Nathan, Jefferson and others from spotting Max. It requires waiting for them to have their backs turned and sneaking past them. The objective is to get through the art gallery, get through the locker room and then get through the park to the bench. Once you sit at the bench you’ll get out.

When trapped in the bathroom with the door and the keypad, the input code to get out is: 0311

The number to get out is the only number that shows up in the reflection of the mirror. For a slightly alternate playthrough with a different set of outcomes, Nukem Dukem has a three hour playthrough you can check out below.

After the digicode sequence there are no more real puzzles to encounter and the game plays out fairly straightforward from then on. The season ends on a cliffhanger depending on what choice players make, either saving Chloe or saving the world.

If you haven’t already played the game or you just want to learn more, you can do so by paying a visit to the official Life Is Strange website. You can grab the full season for PlayStation devices from the PS Store, for Xbox game consoles on the Xbox Store, and on PC from the Steam store.

Lastly, if you missed others Life is Strange Walkthrough, you can check here for Episode 1, Episode 2, Episode 3, and Episode 4. Happy Gaming!!