The hack-and-slash adventure game from Thunder Lotus Games features epic boss fights, large stages and Norse themed lore that fuels the adventure of a warrior named Thora collecting runes across mythological landscapes. For players looking for hints and tips or a guided walkthrough of the game, there is one available for Jotun.

YouTuber Rangris Gaming has a 1080p 60fps walkthrough of Jotun from start to finish. You can check out the full 14 video playlist below, covering each of the game’s stages and bosses.

The Mimir wells scattered around the game world will heal you. Also, the blue flowers will work as antidotes to heal poison effects. You’ll need the flowers both for stages and for fighting bosses.

The first rune is located in the forest. You’ll have to acquire various upgrades and abilities before getting the rune. Simply follow the pathways as indicated to get the healing ability and the life upgrade. The first boss you fight is pretty easy, as you chip away at his life he gets bigger. Simply keep attacking his feet to whittle away his life and kill him. Roll out of the way of his axe swings, which should be pretty easy.

The second boss doesn’t require a lot of travel, and once you enter the Void you simply have to follow the path to giant flower boss. In between the combo attacks just attack her stomach. Be careful and watch out for the poison; the poison comes out whenever the giant white flower appears on her back. Just run toward any of the blue flowers to avoid being affected by the poison. Doing enough damage to the boss will open up a hole inside where you can directly attack the flower located inside of her. Use a charge attack to deal massive damage.

For the second rune, in the stage The Roots of Yggdrasil, you can follow the map below to get right to the rune. However, if you want to get the defense buff you’ll need to watch the second video in the playlist to see how you navigate through the maze-like stage to get the buff. 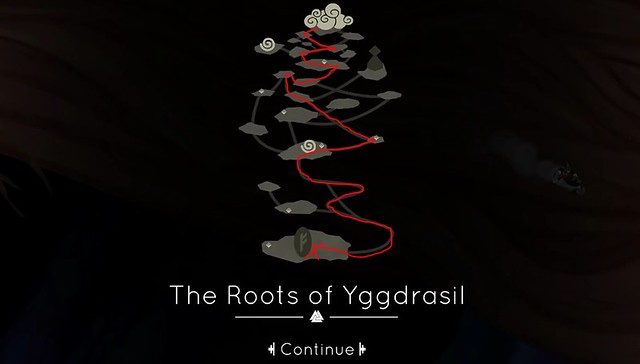 In Brokkr’s Forge you’ll get through a couple of segments by paying attention to the environment. For instance, if you see red markings and a crack in the wall you’ll be able to break through those parts of the wall.

In the upper northwest end of the map you’ll find a Loki statue where you can unlock the Decoy ability. You’ll find the Fe rune in the bottom southeast corner of the map.

Once you get the rune and proceed to the next level, you’ll have to fight Fe in a giant arena. The boss is a lot easier than the plant boss, only because you can use the decoy for the dwarves and then continue to attack Fe while the Dwarves are distracted. After Fe’s life gets down to halfway, six pillars will emerge. Simply begin to attack the pillars and when they break the ceiling will begin to crumble and fall down onto Fe and the dwarven minions. This also takes a significant amount of life from Fe. 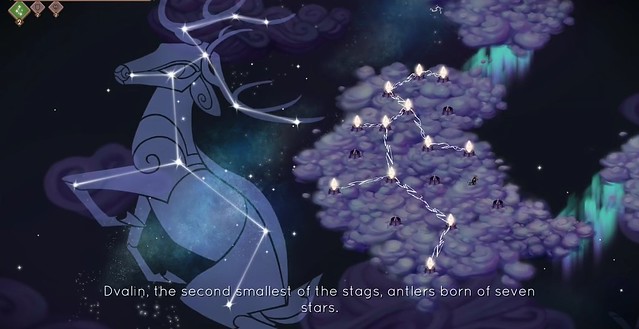 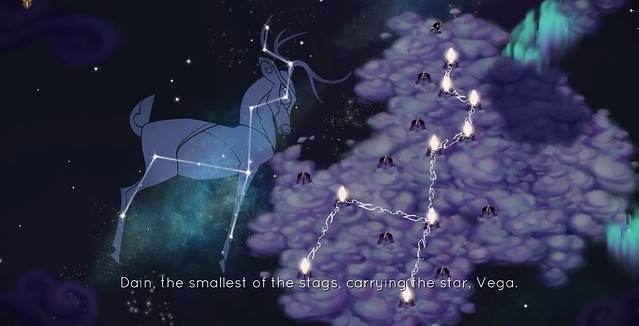 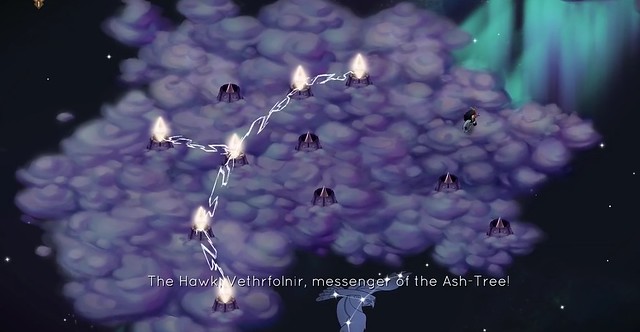 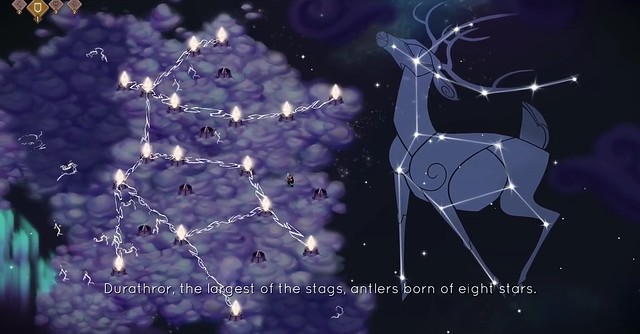 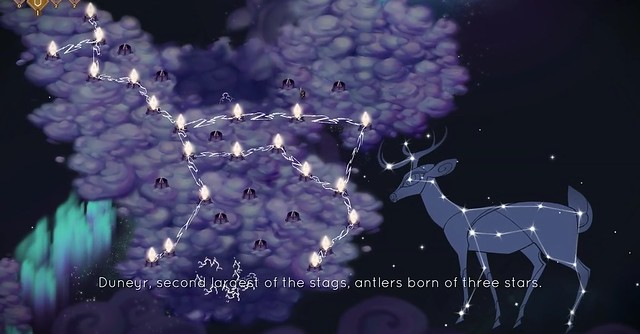 After completing the lightning puzzles you’ll be able to proceed to the end of the stage and move on to the next level.

Vethrfolnir’s Roost is mostly a straight-through stage with another maze-like design similar to the Roots of Yggdrasil. Simply traveling through the map will eventually lead you to the runes at the top of the map. However, if you want the life upgrade from Frigg, you’ll find it at the northeastern side of the map, just slightly lower than where you found the rune. It’ll be over to your right when moving down after you get the rune. If you’re having trouble navigating through the Roost, you can use part 6 of the video walkthrough above to help you navigate. It can get tricky if you’re looking for specific items to retrieve.

The Nine Rivers is a fragmented but slightly more straightforward stage to navigate. The only thing to watch out for is the heavy winds that will take your life down significantly. Use the erected structures to hide behind them when the winds begin to pick up.

You’ll fine the rune in The Nine Rivers to the northeast on the right side, upper corner of the map.

If you want the speed boost skill, you’ll find it on the lower end of the map on the bottom right hand side. You’ll need to take a long narrow path toward the Frejya statue to get the speed skill.

Next up you’ll have to battle the wintery ice boss, Isa. He’s a big hulking, slow moving boss. Early on just stay away from his ice breath and running charge. Proceed to chisel his life away after each of his slow attacks. The boss fight is nothing like the one from Titan Souls, so the strategy is mostly straightforward hack and slash.

The next stage is Ymir’s Blood. It’s another one of those maze-like stages. You’ll need to venture from one area to the next using the little rafts. Simply charge up the axe attack while standing on the raft to move from one isle to the next. There’s nothing really special about this map other than dodging some of the fire effects that burn through the ground. This level is more of a story map, as Thora explains how Ymir came to be and how the Frost Giants were formed. Simply moving through the level will reveal more about the game’s story as you eventually get to the rune.

The stage The Crater is a standard run-and-hack stage. You’ll mostly battle boulder throwing enemies. To defeat them you must charge up your axe and hit them with a heavy blow to make them explode.

As you travel through the stage you’ll get to a section where you’ll have to cross small isles in lava. In order to progress you’ll need to move the boulders cross the isles and place them in the lava to avoid being burned. There’s one segment near the southern part of the map where a giant is on a lone isle throwing rocks. You can use him to get to a segment to the far right by standing near the ledge letting him throw boulders while knocking them into the lava. You can see how you can set them up with the image below. 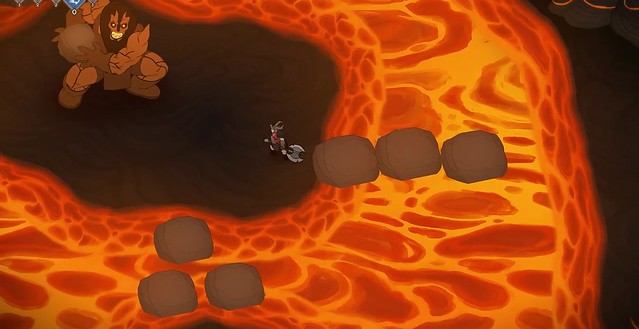 You’ll need to use the same tactic to make a bridge to the lower isles as well, where you’ll find one rune located on the lower right side of the map. It’s a tedious process but that’s how you get across to each isle. The other rune is located on an isle close to the section under the bridge near the left-center of the map.

After getting both the runes you’ll then have to face off against the boss Kaunan in the fiery forge. He’s another easy boss to fight so long as you watch out for his aerial fire attacks that drop after he leaps into the air. His sword gets stuck in the ground almost after each attack, so you can use your charge-up attacks as often as possible as well as Thor’s special lightning hammer attack to dwindle his life quickly. 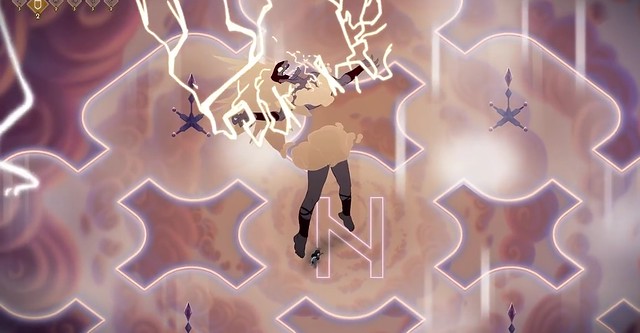 After defeating Kaunan, you’ll next have to face down against the boss Hagalaz, an impressive looking lightning boss. The boss can be very difficult to fight because you have to watch out for the small lightning charges constantly emanating from Hagalaz. Midway through the fight a clone of the boss will be made and you’ll not only have to watch out for all of the little lightning charges but you’ll also have to fight off both bosses. Don’t forget to use Thor’s lightning hammer attack as often as possible. The fight won’t be easy and you’ll need to constantly stay on guard to watch out for their attacks if you want to survive.

The final fight will be against Odin, who will mostly just float around and throw his spear. He will also summon various bosses that were previously defeated. Simply dodge his attacks and wear him down until he dies. He’s actually fair easier to defeat than Hagalaz, so long as you watch out for the bosses he summons into the fight.

Jotun is available right now for PC on Steam for only $14.99. You can learn more about the game by paying a visit to the official website.